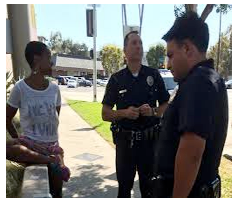 VOICES-I hate those cop apologists (See CityWatch-“The Daniele Watts Stop” - they forget that most people are intimidated into not making reports about police misconduct in the first place by first saying they will deal with it by unofficial means then when that doesn't work they threaten those making police reports with arrest if they find it is not true by their standards.

In some cases if someone does stick with his story the LAPD will make that person’s life miserable by harassing them and their family until they withdraw the case.

And of course the final point is that police investigating police never find them guilty, they will not break the CODE OF SILENCE.

The only complaints that are upheld by Internal affairs are those between police.

What we truly need is an Independent Elected Civilian Police Review Board which can investigate police misconduct and fire police. Otherwise we as taxpayers are stuck with paying multimillion dollar lawsuits in Civil Courts and even then the police are not fired because they are protected by a powerful union that silences the public officials because they fear if the antagonize the union they will get their members to vote against them.