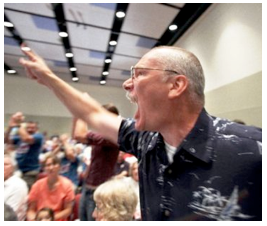 GELFAND’S WORLD-It may be a comment on our civilization that dealing with difficult people is a breakout session at each recent annual meeting of the neighborhood councils. This year was no different. The session itself was surprisingly useful, combining workplace psychology with a nuts and bolts discussion on how to deal with threats that are made in the neighborhood council environment. The presentations were on point, but to my mind, there is one additional topic that might usefully be added to the mix. More on that near the end.

The session I'm talking about, presented at the Saturday’s Congress of Neighborhoods, was officially titled The Difficult People Among Us. Human relations guru Emily C. Williams led off with a discussion of the different varieties of difficult people we deal with in the neighborhood council setting. She began by explaining that sometimes you run into somebody who is just having a difficult day. One message is that we should be careful not to overreact and risk becoming difficult people ourselves, particularly when dealing with somebody who is just having that bad day.

But there are people who are truly difficult, in the sense that they take up our time unnecessarily, irritate and annoy us, and manage to disrupt meetings that could otherwise be productive. I think we've all had experiences with such types, but we tend not to understand the underlying psychodynamics that drive such people. Lacking this understanding, we tend to react to difficult behavior in ways that are counterproductive.

Much of the material in the next few paragraphs is taken from the Powerpoint handout that Williams provided us. Most of the descriptions of motivations and types of behavior are excerpted directly from her words:

That's quite a mouthful. I think we all understand that this list was just meant as a sketch of some of the more prominent elements of pathology, and that people may have substantial swatches of normality mixed with symptoms of one or more of these categories.

I'll just give a couple of brief summaries of the content.

The Hostile-Aggressive, according to Williams, is driven by a need to feel superior to the rest of us. This type of person expresses opinions forceful, launches direct attacks on other people, interrupts a lot, and has firmly entrenched ideas and perspectives. These people are difficult for the rest of us to deal with, because any resistance provokes renewed attacks, including belittling, argumentative remarks.

According to Williams, it's possible to deal with the Hostile-Aggressive, but it requires a multifaceted approach beginning with avoiding the urge to respond in kind. Since Hostile-Aggressives tend to attack people by using non sequiturs and irrelevancies, one approach is to remark calmly about getting back to the original topic. It won't make your opponent less hostile, but it will force him to back off a little, since it will immediately become obvious to the rest of the people in the room that the discussion has gone off topic.

Williams went on to talk about the Passive-Aggressives. She argued that they generally crave attention and acceptance. They may try to look non-threatening, but will use innuendos, sarcastic remarks, and backhanded compliments. Williams got a big laugh when she imitated a passive-aggressive person saying sweetly, "Have you lost weight?"

They also engage in non-playful teasing.

Williams' prescription? Since these people are terribly insecure deep down, fighting back directly in the public arena is not the right procedure. You should arrange a private meeting, start out by saying something complimentary, and then explain in very direct language what you want from them. You appeal to their need for validation, but get them to understand that they cannot use you as a target.

There is also the Aggressive-Passive, another insecure type who craves acknowledgement and respect. This is the person who will be in the room, but won't do anything useful. Williams describes this type of person as the type who enjoys creating chaos and crises, sort of the Chicken Little of your group. The last category, the Avoidant-Passive, feels unworthy and fears looking foolish. The prescriptions for these types involve drawing them out of their shells, getting them to do something useful by pointing out the credit they will get for their accomplishments, and avoiding getting drawn into gossip sessions with them.

Most of this advice was obviously aimed at the person who is in a leadership position, is trying to get something accomplished, and faces behavior which is antithetical to the overall goals of the group. I think that at this level, the advice makes sense. We've all been in committee meetings where somebody is perpetually negative and tries to drag the group off topic. When the negativity is based on underlying psychological needs rather than a rationalistic evaluation of the situation, such behavior is an effective way to do damage to the aims of the group. It is then incumbent upon the leader to deal with the situation before the whole process is ruined.

I should point out that there are lots of internet pages that offer advice on dealing with toxic people, either in the workplace, or your difficult relatives. You can find such advice easily enough by doing a search for the subject of "dealing with difficult people." The special needs and dynamics of the neighborhood council, a place in which most everyone is an unpaid volunteer, don't seem to be adequately covered by any of those internet sites, although they do provide general purpose information that may be useful in the workplace. For this reason, it may be useful for participants to catch the program on difficult people at the next Congress.

The remainder of the program involved the potentially more serious issue of violence and threats. Vivienne Swanigan of the City Attorney's office discussed the issue that is officially referred to as violence in the workplace. We've seen quite a bit of workplace violence on the national level over the past few years, and the City of Los Angeles faces the task of preventing such violence as it is able.

It's obviously not easy, but when workers and supervisors see an accelerating pattern of threats or violent acts, they take notice. Bringing a weapon to work or violating a restraining order are top tier offenses, along with destruction of city property. The intermediate level involves threats and verbal abuse.

Swanigan provided a list of warning signs, including withdrawal from others, paranoid language or actions, and increasing irritability or belligerence. The city views fascination with weapons or acts of violence on this list. In other words, the city of Los Angeles is trying to avoid the kind of behavior that was once referred to as "going postal."

Most of our neighborhood councils won't be facing the more extreme forms of misbehavior. But for those councils where there is a developing problem, there are city agencies that can take action, starting with the City Attorney's office.

So what is the alternative that I alluded to at the beginning? It's actually very simple in concept, although it has proved to be difficult in execution.

The way to control difficult people is to train neighborhood council chairs and board members in Roberts Rules, to a sufficient extent that they can deal with obstruction in a polite but efficient manner. Many of the examples used in the Congress presentations were illustrative of remarks that a good chair would deal with immediately, by calling the person out of order.

Admittedly, there are many comments that come up in public comment that some people will consider insulting or even downright nasty, but that is a different matter, and a well trained board knows enough to view such comments in the proper perspective.

But in one example that Emily Williams provided, an aggressive, hostile speaker is using her own background as a weapon to berate another participant. A savvy chair, recognizing the dynamics of this exchange, can point out that the speaker is getting off-topic, and put an end to this part of the conversation.

I would also like to argue that it is the responsibility of the elected chair to take note of developing antagonisms, erratic behavior, and hostile behavior. An effective chair may be able to smooth over some personality clashes, simply by privately (and quietly) pointing out to antagonists that they are getting out of hand.

I should also point out that the code of conduct newly passed by the Board of Neighborhood Commissioners provides legal tools to the city agencies, including the Department of Neighborhood Empowerment, to deal with actual bullying and harassment.

Of course if the difficult person is the elected chair of your governing board or your volunteer organization, you have a different sort of problem. That's where political organizing and elections come in.