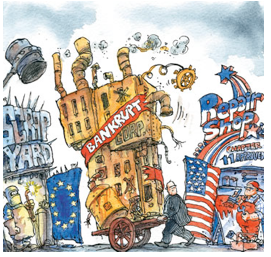 LEANING RIGHT-Let’s start by examining Detroit. It used to be a gem.

Long a major population center and major engine of worldwide automobile manufacturing, Detroit has gone through a continuing economic decline. Like many America cities,  Detroit reached its population peak in the 1950 census. The peak population was 1.8 million people, and as of the 2010 census had less than 40 percent of that number at just over 700,000 residents. The city has declined in population with each subsequent census since 1950.

Frank Popper, a professor at Rutgers and the Princeton Environmental Institute at Princeton University compares the Great Plains decline with Detroit's. During the 20th century many rural counties have seen the same or higher population declines than Detroit. Popper says the Great Plains is experiencing rural decline while Detroit is the foremost example of urban decline. They suggest solutions for "smart decline" such as combining rural counties to eliminate some administrative overhead, and for Detroit they suggest a concentration of population, land banking the unsalvageable neighborhoods.

The ongoing decline has left its mark on the city, most notably in severe urban decay and thousands of empty homes, apartment buildings and commercial buildings around the city.

More than half of the owners of Detroit's 305,000 properties failed to pay their 2011 tax bills, exacerbating the city's financial crisis.

Detroit may be the largest city in American history to go bankrupt, but it is not alone. The city raced to the financial insolvency finish line before anyone else in its class.

Keep an eye on "too big to fail" cities like Chicago, Philadelphia, and New York.

According to an analysis by the Manhattan Institute, several Chicago pension funds are in worse financial shape than the worker pensions in Detroit. One is only 25 percent funded, and where the other 75 percent of the money will come from is anyone's guess. And there are about a dozen major California cities having systemic problems paying their bills.

Here is a worry list, based on bond ratings and other data, of the top 20 cities to watch for financial troubles in the wake of the Detroit story:

1. Compton, Calif.
Compton has teetered on the brink of bankruptcy after it accrued a general-fund deficit of more than $40 million by borrowing from other funds, depleting what had been a $22 million reserve.

3. Fresno, Calif.
Fresno had the ratings of its lease-revenue bonds downgraded to junk-level by Moody's, which also downgraded its convention center and pension obligation bonds due to the city's "exceedingly weak financial position."

5. Harrisburg, Pa.
Harrisburg is at least $345 million in debt, thanks largely to municipal bonds it guaranteed in order to finance upgrades to its problematic waste-to-energy trash incinerator.

8. Menasha, Wis.
Menasha defaulted on bonds in 2007 it had issued to fund a steam plant which has since closed and left the city permanently in the red and, as of 2011, had $16 million in general fund revenue, but had $43.4 million in outstanding debt.

9. Newburgh, N.Y.
Newburgh was cited by Moody's for "tax base erosion and a weak socioeconomic profile," with 26 percent of its population below the poverty line and its school district facing a $2 million budget gap.

10. Oakland, Calif.
Oakland is trying to get out of a Goldman Sachs-brokered interest rate swap that is costing it $4 million a year. According to a recent city audit, Oakland has lost $250 million from a 1997 pension obligation bond sale and subsequent investment strategy.

12. Pontiac, Mich.
Pontiac, where the emergency manager has restructured the city's finances, was downgraded by Moody's, reflecting the city's history of fiscal distress and narrow liquidity.

13. Providence, R.I.
Providence, rumored to be filing for bankruptcy for more than a year, experienced consecutive deficits through fiscal 2012, has a high-debt burden and significant unfunded pension liabilities, as well as high unemployment and low income levels.

14. Riverdale, Ill.
The credit rating for Riverdale is under review by Moody's because the city has not released an audit of interim or unaudited data for the year that ended April 30, 2012.

15. Salem, N.J.
Salem is under close fiscal supervision after it issued bonds to finance the construction of the Finlaw State Office Building, which was delayed by construction issues, and its leasing revenues are not enough to cover the debt payments and the maintenance fees.

16. Strafford County, N.H.
Strafford County regularly borrows money to cover its short-term cash needs after it spent two-fifths of its budget on a nursing home, which lost $36 million from 2004 to 2009.

17. Taylor, Mich.
Taylor has a large deficit and is vulnerable due to significant declines in the tax base, limited financial flexibility, and above-average unfunded pension obligations.

18. Vadnais Heights, Minn.
The St. Paul suburb of Vadnais Heights had its debt rating downgraded to junk last fall by Moody's after the city council voted to stop payments to a sports center financed by bonds.

19. Wenatchee, Wash.
Wenatchee defaulted on $42 million in debt associated with the Town Toyota Center, a multipurpose arena, and has ongoing financial issues due to the default.

Another problem has been the decline in family structure that has become acute in so many big cities across the country, from Los Angeles to New York. In many cities, as many as two out of three children are born to a family without a father. As Charles Murray of the American Enterprise Institute has warned, "Single-mother families are a recipe for social chaos."

They are a major factor in high-poverty levels of many U.S. cities, again with Detroit being exhibit A. Welfare reforms have helped, but much work needs to be done to reinstall a culture of traditional two-parent families in urban areas. This would lead to less crime, fewer school dropouts, more businesses, and more social stabilization.

This all began with President Lyndon Johnson’s War on Poverty.

Los Angeles is also racing to the financial insolvency finish line. Mayor Eric Garcetti recently proposed that the minimum wage be increased to $13.25 by 2017.

If the plan goes through, the minimum wage for Los Angeles workers would be among the highest in the country. Seattle has approved the nation's highest minimum wages of $15 an hour.

The Los Angeles Area Chamber of Commerce came out against Mayor Garcetti’s plan to raise the minimum wage to $13.25 per hour by 2017, saying it would kill jobs and costs businesses about $10,000 per employee.

“This stand-alone proposal will reduce, not increase the number of jobs in Los Angeles,” chamber president Gary Toebben said. “Many employers, especially small businesses and nonprofit organizations, will be forced to raise prices, lay off workers, cut hours or move across the street into another city to avoid this cost increase. None of these are good for our economy.”

Garcetti, a 43-year-old Democrat, said he will ask the City Council to lift the prevailing $9 minimum to $10.25 next year, then phase-in $1.50 annual raises over the following two years, according to his office.

An example of what is going to happen is Hollywood.  Los Angeles, the home of Hollywood, is what many people call the entertainment capital of the world. But much of the city's television and film industry is leaving Los Angeles for other cities in the United States and other countries.

Steve Michelson is part owner of a catering company that feeds the cast and crew of several Los Angele-based shows. He says that in recent years, business has not been good.

"I have individuals doing jobs that two or three people used to do," said Michelson. "A company yesterday called me; they have five catering trucks they want to sell me. They want to go out of business."

Some caterers for the television and film industry are leaving Los Angeles, following productions to other cities.

The president of Film LA, Paul Audley says there has been a dramatic change, particularly in the television industry.

"This year, for example, we know of the 23 new television dramas," Audley noted. "Twenty-one of them are going out of state and they used to virtually all be filmed here. We had more than 80 percent of television, and now we're down to about 40 percent."

"A big part of it is obviously creatively, that we can really realize what's on the page. The other equally as important part is actually a tax incentive," Bajaria explained.

Bajaria says cities outside of Los Angeles started becoming attractive to studios about a decade ago.

"It was about 10 years ago, New Orleans really came out with some first tax credits and a couple of the other states really followed."

"Ultimately at this point, anything a movie needs to make the project can be found here in this state and specifically in New Orleans, so with that, comes jobs," Williams said.

The same is true for New York, another state that offers major incentives for the film and television industry.

Douglas Steiner is chairman of Brooklyn-based Steiner Studios, which is expanding because business is good.

Film LA's Paul Audley says that although California also offers financial incentives to television and film companies, they are not as generous as other states across the United States.

"Unfortunately, we don't have enough of that money available to truly compete," Audley explained.

And it is a global competition with countries in Eastern Europe as well as Canada, Australia, New Zealand, and Britain vying for Hollywood's entertainment industry. A lot of Hollywood is simply moving to Vancouver, Canada. It is close and it is another country.

Of course, after making his proposal on minimum wage Garcetti realized that companies will simply move across the street to neighboring cities. He immediately set about trying to convince other cities to also raise their minimum wage. I think the other cities will just settle on accepting the relocating business.

(Kay Martin is an author and a CityWatch contributor. His new book, Along for the Ride, is now available. He can be reached at [email protected] )