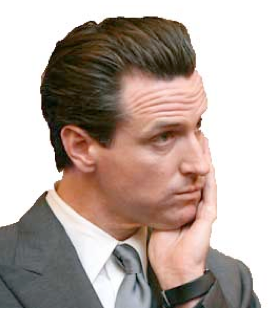 WHO WE ARE-Search on Google for the phrase “Gavin Newsom philanderer “and you get 34,300 results in 0.17 seconds.

I’m not sure every one of those hits goes beyond the California Lieutenant Governor’s sexual achievements but the first 10 pages of links were all about his womanizing during his years of public service as San Francisco supervisor and mayor and now in his role a heartbeat from the governor’s mansion.

Remove a few letters (h-i-l-a) and Google the phrase “Gavin Newsom panderer” and you get more than 10 times as many results in less than half a second – which may suggest we are more interested in being flattered by someone pandering to our prejudices than by their lack of discretion and honor.

Apart from the corporate media in San Francisco everybody else in the mainstream and alt-media seem to enjoy using the words “philanderer” and “panderer” or their synonyms when talking about Newsom.  He’s a guy who knows how to have fun and everybody loves to make fun of him.

For instance, sfist.com ran an article two years ago at an event with a headline that referred to “world-class philanderers convene.” A cutline on the accompanying photo said: “Today in San Francisco, French President François Hollande met with fellow adultery scandal survivor Lt. Governor Gavin Newsom.

A few years earlier when Newsom was the star of the gay marriage Prop. 8 campaign, sfweekly.com reported that in an ad for the ballot measure, "He sounds like, y'know, someone who really enjoys Broadway musicals and interior decorating."

Added the writer:  “Of course, Gavin's not gay; he's an accomplished womanizer, after all. But like a lot of people, he's got a Zelig-like tendency to want to fit in by adopting the speaking styles and mannerisms of the people around him. Ross added that when Newsom talks to African American audiences, he often develops a Southern drawl. (Hmmm ... so when Gavin goes to the pet store does he bark?)”

You may be wondering at this point why I would bother to conduct such an investigation when it’s so clear Newsom himself and voters are all so comfortable with the facts that he is both a philanderer and a panderer of some considerable repute.

My interest was piqued the other day when I got an email blast that carried this message line and headline:

The full text of the message below that:

"The City and County of San Francisco and the entire Bay Area has long stood staunchly on the forefront of domestic violence awareness and prevention. That's why the 49ers’ continued insistence on playing Ray McDonald during his ongoing criminal investigation is a painful affront to every victim of domestic violence and sends a troubling message to our community and especially our children that 'zero tolerance' are empty words, not real actions. In light of the increased public awareness of this issue in the wake of the horrific Ray Rice assault and today's decision by the Carolina Panthers to deactivate Greg Hardy, we strongly urge the 49er organization we grew up revering to do the right thing -- right now -- and bench Ray McDonald, pending the outcome of his felony domestic violence investigation by San Jose law enforcement."

Not since Sen. Joe McCarthy reigned supreme with his communist witch hunts in the ‘50s has there been this kind of hysteria in America. We are seeing a tsunami of outrage and denunciation that leaves anyone who would suggest the truth that lies in the details, that the crimes must be adjudicated before punishment is meted out and that the punishment should fit the crime.

Are you now or have you ever been a wife beater or a child abuser?

I do not have to take the Fifth Amendment on this one: To the best of my recollection I have never hit a woman. I have never spanked my son though there are times I wish I had now that he’s a doctor doctor. I even shut my eyes when I got drafted into an army fighting a war I loathed and had to fire a gun for the first and only time – sorry, this is my rifle, this is my gun, this is for fightin’, this is for fun.

So to get to the point I was struck by the assertion by a well-known philanderer and panderer that it is “a painful affront to every victim of domestic violence” that the 49ers let McDonald play defensive end last Sunday. They called it “a troubling message” that “zero tolerance” are “empty words.”

They decried the “horrific Ray Rice assault” though personally, I found what was horrific in Ray Rice’s infamous elevator pitch video was how he dragged her out of the elevator by an arm instead of picking her up and affording her even the smallest amount of dignity and respect despite his  despicable act.

The Newsoms fine sensibility  on matters domestic didn’t apply when the lieutenant governor carried on an affair with the wife of his close friend and long-time top aide or when the Jennifer Seibel decided to become the new Mrs. Newsom.

And then there’s the notion that Ray McDonald, the 49ers defensive end, should be suspended from play – and have his checks stop coming from the team – when he hasn’t even been charged with a crime nearly three weeks after he was arrested at his home by San Jose police during the player’s birthday party with a large crowd of football players and others in attendance.

Clearly, something got out of hand and the cops saw “visible” injuries on McDonald’s pregnant fiancé but after numerous witnesses were interviewed and what exactly happened and how serious it was remained unclear, the team decided McDonald could play despite the domestic violence uproar involving the NFL.

Still, Gavin Newsom believes McDonald should be punished and then tried later – if sufficient evidence is found to justify prosecution which at this point is unlikely.

As one media website noted, “If you’re so disgusted by the actions of Ray McDonald, Mr. Lt. Gov., where were you when it happened? Where was your statement last week? Or do you only ‘care’ about an issue when people are paying attention to it?

Newsom only found the need to stand up and publicly champion the cause of abused women after national outrage was ignited by the elevator video of Ray Rice punching out his wife six months ago – a case that led to prosecution being dropped when he agreed to get therapy and the NFL imposing a modest two-game suspension that was changed to indefinite suspension when TMZ published the video.

That’s a far different tack when he was elected lieutenant governor and thus the President of the Senate three months after fellow Democratic Sen. Rod Wright was indicted for political corruption, voter fraud and perjury in September 2010. Back in April of that year, the Senate controlled by Democrats secretly agreed to pay $120,000 in taxpayer money to settle a sexual harassment suit against Wright – a settlement that was not revealed for 18 months and then only under threat of a freedom-of-information lawsuit.

In fact, the serious criminal charges against Wright allowed him to continue to represent an Inglewood-based community that he did not have the legal right to represent because he didn’t live in the district.

Even after he was convicted in January 2014, Newsom had no trouble allowing Wright to continue to serve in office. It was only in March when two other Democratic members of the Senate, the house that Newsom presides over, were indicted on various public corruption charges like bribery and gun-running for a gangster, that action was taken against Wright and the others, Ron Calderon and Leland Yee.

They were all suspended in March – with pay. It was only when Wright was sentenced earlier this month to 90 days in jail that he resigned and finally was cut off from the public payroll.

Still, the frenzy over domestic violence claimed another battered woman last week when singer Rihanna’s video of Jay-Z’s Grammy Award-winning song “Run This Town” was pulled from the opening sequence of Thursday Night Football on the NFL Network because the besieged tax-exempt league is suddenly “moving in a different direction.”

“Y’all are sad for penalizing me for this,” Rihanna tweeted. “F**k you.”

Gavin Newsom has yet to comment on this sideshow.

(Ron Kaye is a lifetime journalist, writer and political observer. He is the former editor of the Daily News and the founder of the Saving LA Project. He writes occasionally for CityWatch and can be reached at [email protected])