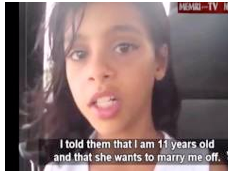 PERSPECTIVE-I am guilty of asking why good Muslims don’t speak up against the terrorist and separate themselves. I was wrong. This child tried to do that with her terror, and she was killed. Listen to her, what an intellect, a jewel, a leader. I would have risked my life to save her. Wouldn’t you?

Most Muslim families don’t marry off their children. They wait for nature to take it’s course as we do in the free world. Yet we still bind all Muslims into one basket. The terrorists as well as the parents who would do this to their child. They are of the minority. So why does that matter?

I want to suggest that we stop calling terrorists Muslims. By calling them Muslims, we give they the status they want. We also alienate the Muslims who would never do what Isis or other terrorists have done. Most Muslims in the world are hostages to these terrorists.

For example Iran is full of Muslims, but most of them are hostage to the regime.

We have many murderers who were convicted. We never identify them by their religion. The only reason we call these terrorists Muslims is because we’ve been fooled into doing that by the terrorist.

Terrorists get the advantage when we accept them as Muslims instead of terrorists. This means the rest of the world is abandoning those Muslims who are not party to or ever want the violence.

Long term hostages grow close to their captors over time, and if the world gives them up and count them as evil like the terrorists., then we burden their chances of braking free. Additionally we push them to support the terrorists in the future generations. Children who are born hostage and don’t see their parents fight back, live that life as normal.

Those who quote the Koran or atrocities of Mohammad to prove Muslims are inherently bad or violent and want to kill everyone else, should look at the Torah and the violence within it. The only difference is we the Jews don’t have a group of violent people who quote the Torah as the reason for their violent inhuman behavior. But unfortunately the Muslims do.

History shows, that any time humans colored a group of people based on Race, Nationality, Religion or skin color, it was a big mistake. We are in the midst of correcting that. The worse thing we can do now is forget the lessons we’ve learned and in some cases even apologized for.

This fight is between good and evil. It’s important that we don’t make it a fight between all non-Muslims and Muslims. If we do that, we are making an irrevocable mistake for the future of all humanity.

I’m a Jew from Iran who is a U.S. Citizen and the founder of a movement to Significantly Improve Humanity using logic and ethics. The culmination of which can make World Peace more likely. Only if enough people help by sharing the solutions.

Please join me in my movement to Significantly Improve Humanity.

I will make a website as a result of what happened to Nada Al-Ahdal. For now I dedicate this one to her: www.Daring.me . Ignore the music. Listen to the words.

(Behtaj Amiri is the founder, Art of Thought Solutions.  This perspective was posted earlier at americannewsservice.org)