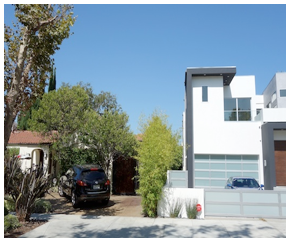 PEOPLE POWER-The La Brea – Hancock neighborhood is seeing an onslaught of “mansionization,” and residents of the neighborhood of  single-family homes  have organized to prevent additional small homes being bulldozed to make way for large two-story modern structures. Yet the journey to make changes in Planning and Zoning is not proving to be easy.

The original 294 homes, mostly built between 1922 and 1925 and less than 2,100 square feet, have detached garages in the rear of property and were built in “revival” style architecture, with a predominance of homes having a Spanish Colonial flair. The homes front the north-south streets of Sycamore Ave., Orange Ave., Mansfield Ave., and Citrus Ave. The area is between La Brea and Highland, south of Third Street to Wilshire Blvd. The La Brea-Hancock Homeowner’s Association (LBHHA) canvassed the neighborhood and found 70% of residents in support of limiting mansionization.

The area is not protected by a Historic Preservation Overlay Zone, as many of the surrounding areas are, but is covered by the City’s Baseline Mansionization Ordinance (BMO) of 2008 which was signed to prevent building ‘super-sized’ homes in old neighborhoods.

Developers, however, have figured out ways to gain the system by using loopholes, like using environmentally -friendly construction techniques, to gain other bonuses down at City Planning and skirt the original intentions of the BMO to limit house size to 50% of the lot.

‘Developers are not listing the actual square footage of their new homes in the real estate listings,” Barbara Savage, President of the La Brea – Hancock Homeowner’s Association (LBHHA) told the GWNC’s Land Use Committee (LUC) in July. “They build these big attached garages on the front of the homes, then often turn them into actual living space, which increases the interior square footage. Plus, these double garages on the front are insulting to the street scape of the neighborhood that is already there, where garages are tucked in behind the homes.”

A number of LBHHA residents appeared at the LUC hearing to voice other concerns including the fact that the developers will often knock on the doors of elderly residents and offer them $800,000-$1K for their homes, then tear them down before getting formal approval from the City. Other complaints heard at the meeting: the unauthorized deconstruction puts residents at risk for exposure to asbestos removal; the new homes loom over older homes and their backyards, causing residents to lose their privacy; and developers often also unilaterally remove mature trees from the parkways as they impede quick construction, thus destroying one of the prized aspects of the neighborhood – the lovely, sycamore-shaded tree-lined streets.

With the assistance of Councilman Tom LaBonge (CD4) the LBHHA was hoping to secure a Motion before the Planning Land Use Committee (PLUM) this week  to study the need for a Residential Floor Area (RFA) overlay to limit the size and massing of new structures. Renee Weitzer, Chief of Land Use Planning for CD4 South, was present at the LUC meeting and voiced LaBonge’s support for the neighborhood’s concerns.

The groups efforts were stymied this week however when the PLUM committee decided that with so many RFA requests before them from various neighborhoods, the matter should go back before City Planning to study possibly amending the original 2008 Baseline Mansionization Ordinance. City Planning has 30 days to study the matter.

“Nobody can make a quick decision on this, and subsequently we lose more homes,” Savage told the Larchmont Buzz. “Our neighborhood is just not sexy enough to save. We are sexy enough to put a subway station on the corner of La Brea and Wilshire with all the noise and chaos of construction, but not sexy enough to protect our historic character.”

LBHHA’s Vice President Bob Eisele said they have worked closely with both Councilman Tom LaBonge and Councilman Paul Koretz along the way. “LaBonge has been very supportive of our RFA efforts,” Eisele told the Larchmont Buzz. “But now that our RFA motion has been delayed and rewriting the BMO will no doubt take time, we are going to try for an Interim Control Ordinance (ICO) to stop further development until this matter gets sorted through City channels. The ICO would “plug the loopholes” in the BMO’s bonuses and exemptions that are allowing builders to construct homes far larger than 50% of lot size.  In short, we’d ask that no new home construction, under the ICO, be allowed to exceed 50% of lot size, per the BMO amendment’s proposed changes.”

“We are a prime target for development,” Eisele went on to say. “The Council offices know full well that voters are getting angry with the lack of action on this. But they are also influenced by what the developers want….and the City loves the higher property taxes they get from these large homes.”

“We are going to stay organized and active and see what happens,” Eisele said.

(Julie Grist is the Co-Editor of LarchmontBuzz.com.)