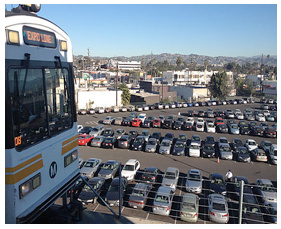 GETTING THERE FROM HERE-There are theories, and there is reality. The emerging Metro light rail system in Los Angeles, and particularly Phase II of the Expo Line, is facing the conflict between the two: Should new light rail stations have parking for riders (reality), or should they not (theory)?

Once I was of the opinion that parking should be limited, if just no parking at all, and make the entire transit journey as car free, and transit dependent, as possible.

With the Southern California sprawl, to get anywhere by transit usually requires the realities of transfers between buses and rails, and here is where the theories of no Metro parking do not hold up to the realities.

When the discussions in the transit organizations I belong turned to the theories of only using transit to get to a rail-in particular the Expo Line-initially I was in favor of as little parking as possible. I’ve been riding mass transit in Los Angeles with regularity since 1992, and have gone through a gauntlet of very trying ordeals. I thought that if I can make it through the system, so can others, hence, everyone should use mass transit as much as I do. Make the people ride buses to the light rail line.

This is the hard-line stance, full of the theories of a life of exclusive mass transit travel.

I am a long time supporter of the Expo Line. I was involved in grass roots organizations promoting the line. I rode Expo from Culver City to Downtown Los Angeles on opening day. For the opening day ceremonies I drove to the Culver City Station, and at that point the realities won and the theories lost.

I saw the tremendous possibilities, but I also saw the folly and uselessness of my hard-nose theories that everyone can be completely transit dependent. Living near LAX, to get to the Culver City Expo Station would require taking the Culver City Bus No. 6 on Sepulveda Boulevard and transfer to the Culver City No. 1 on Washington Boulevard.

During daytime hours, the Culver City buses, which are run by the very good City of Culver City transit agency, would not be too bad. If I was lucky and made the transfers immediately, it would take around 45plus minutes. Driving to the Culver City Station takes around 20 minutes in the evening commute.

What really makes the transit only theories loose is that in the evening bus service hours are much less, with times between buses around 45 minutes.

After my conversion to reality, now when I take the Expo Line to Downtown Los Angeles, I drive to either the Culver City or La Cienega/Jefferson Station.

Many times I attend an event at the Music Center or Disney Concert Hall. Taking the trains to Downtown is exhilarating. After years of driving to the downtown music events in the thick of the evening commute the ease of driving to a station to light rail to subway to a short walk to the concert or opera is fantastic. I arrive fresh, opposed to the battle weariness of fighting traffic. I don’t pay for parking. And most importantly, I am reducing my carbon footprint riding light rail and subway.

With concerts and operas, each performance has it own unique end time. The earliest end at around 10:00 PM. It is not unusual for operas to stretch towards a final curtain of 11:00 PM and later. This is not workable for the theory of using only transit-bus to rail-for this trip.

After riding the Expo back to Culver City, I could be very easily be stuck without a bus, and then have to call a taxi, or the new ridesharing groups such as Lyft or Uber. In addition to the added costs to my trip for these, I would then create more carbon gases: the taxi or rideshare vehicle would have to drive to pick me up, drive me home, then drive back to their headquarters creating three vehicle trips to my one trip if I drove.

Coming home with the car waiting for me at the station would be a quick drive home since traffic is less at night, and with traffic less my car gets better gas mileage, polluting less.

Driving to and from the Metro Station (reality) also saves me that one commodity which once used can never repaid-Time. The transit-only theory also prohibits parents with children and senior citizens whose limited mobilities and sensitivity exposure to the damp night air needs to be accounted for.

While Southern California has our ideal weather, nights can be cold and damp in the winter when the concert and opera seasons take place. Few bus stops have covered shelters which have a roof and sides, so a bus rider waiting for a bus late at night is out in the elements.

To make riding the Expo Line, and other Metro Rail Lines, a total transit experience (bus to train and train to bus) go beyond theory and become reality, there would have to be a dramatic restructuring of mass transit to have buses running later, and running with much shorter time between buses that what is reality today.

To pay for this, there would have to be a complete societal reorganization of spending on transportation, dramatically shifting funds from private vehicles to mass transit to pay for this, and most likely an increase in taxes. Until that happen, if it ever happens, the possibilities/theories of only using buses to get to rail stations are not facing the realities of today.

To make Metro Rail fully successful, bus service to the stations must increase, but there has to be parking at the stations. That is the reality, not a theory. How these parking lots are to be structured for only Metro patrons is another thought.

(Matthew Hetz is a member of Los Angeles Council District 11 Transportation Advisory Committee, a bicycle rider since 1965, a driver since 1975 and a dedicated transit rider since 1992. He is an occasional contributor to CityWatch and can be reached at: [email protected])
-cw