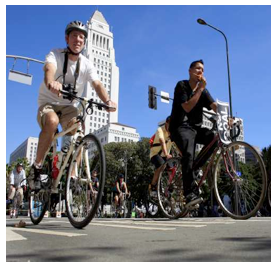 JUST SAYIN’-People are reticent to change.  We feel secure in our comfort zones.  Status quo is less threatening.  But we must accept the fact that change must come as we face a variety of issues we never thought we would have to confront.

More than a century ago, a common form of personal transport was the bicycle (at least until the affordable automobile was invented)—then people eagerly replaced the bike with the car.  If you travel to Europe today, you will witness that most still prefer the bicycle or scooter to negotiate the streets, and there are fewer cars on the roads than we see here in the States.

Have we forgotten the travesty over the electric car?  The manufacturers, such as GM, had most of us convinced that such technology was impractical (remember the movie, Who Killed the Electric Car? back in the 1990s).  We were all like ostriches, sticking our heads in the ground.  Nevertheless, the prominence and utilization of a new generation of electric cars is a fait accompli, and many of us desire all-electric (or at least hybrid) vehicles for our personal use.

Understanding the recent past suggests that we must “go back to the future” as we reconsider our use of the bicycle.  Many have already become advocates.  Think of the MSNBC promos for Chris Hayes, showing him biking in his suit and helmet from his home in Brooklyn to his studio at Rockefeller Center in Downtown New York.  If he can do that, we certainly can emulate his example.

The County of Los Angeles has agreed upon a Bicycle Master Plan which the Board passed in 2013.  It will add 831 miles of bikeways from initial launch to 2032.  The County’s goal to encourage ridership includes “expanding the existing bikeway network, connecting gaps, addressing constrained areas, providing for greater local and regional connectivity, and encouraging more resident to bicycle more often.”  The City of Los Angeles in turn has a 35-year plan to add 1,684 bike path miles.

There has been some resistance registered by many from “the car-obsessed” culture of many Angelinos.  Yet, the fact is that such lanes might only add 41-45 seconds in traffic for the auto/bus or truck driver (not too much to ask if we can reduce air pollution, fuel needs, and ultimately, traffic).  Obviously, if more make use of bicycles, fewer will be using cars.  What wonderful exercise in the fresher air that would result from reduced air particulates and carbon emissions.

The aim is to create a seamless, non-stop bike path, beginning in downtown and extending west to the sea.  The design keeps the entire City in mind.  A rider would be able to “experience virtually all of Los Angeles on a single street, from Chinatown … to Malibu or Santa Monica and Venice” (depending on preference).

Riders would experience viewing the diversity of what Los Angeles has to offer:  mansions, hillsides with observation points, flat surfaces and challenging steep inclines (or declines).

Sunday mornings would be the best time for the most stress-free ride experience (and great for family outings) because there would be less traffic, and a biker would not have to worry continuously about dodging speeding vehiclists. 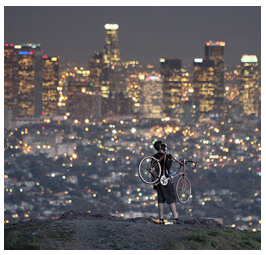 The LA Bicycle Coalition wants to create bicycle-attractive communities.  It plans to offer free workshops to teach skills and safety procedures.  There would be numerous events (with free parking) to entertain the biking family.  Following the examples of our many horse and hiking trails, the LABC would provide lists of alluring bike trails, e.g. the following:

Just as Uber (founded in 2009) provides car share, there is a similar program under construction (ratified unanimously by City Council in 2013 and is now in the pre-launch stage).  It is called Bike Share with the philosophy of “if you build it, they will come.”

The program would indemnify the City for any liability, would incur no costs to the City, and would provide and maintain 400 stations and 4000 bikes.

Riders 18 years of age or older would be eligible to use this program (16 and 17 year olds can also make use of it with a parent or guardian’s authorization).

There would be a small, sliding-scale fee (depending on the plan—a few hours, a day, a week, month-by-month, etc.).  The Vendor websites would be available in multiple languages, would illustrate bike stand locations, and provide receipts for a variety of credit cards.

So far, the Bike Share program has received enthusiastic sponsorship from a number of prominent corporations (some of them are those with whom we may disagree on other topics).  So far the following are supporters:  Kaiser Permanente, Bank of Moscow, Citigroup, BP, Barclays, Humana, and MasterCard.

We must match that enthusiasm with our own support and participation.  Not all of us may be capable of riding a bike, but we can certainly add our endorsement to this effort and not stand in the way of such progress.

Yes, back to the future—bicycles then; bicycles now; bicycles for years to come.  Less congestion, reduced time on the road (when we have to drive), cleaner air, lower carbon footprint, better health—these are only some of the good consequences we can expect from implementation of these well-conceived, thoroughly considered, and soundly thought out bicycle plans.

Besides, sharing the roads with bicyclists just might teach our often reckless vehiclists to be more patient—something that would result in safer roads for all.

For more information, see the following: