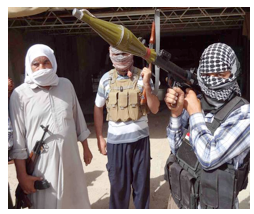 ALPERN AT LARGE-War is brewing.  Conflict is brewing.  Bloodshed is not only inevitable, but it is occurring right now.  Yet while some will blame the warring sides in the Middle East, and others will blame the United States for its past interventions (or lack of interventions), it must be remembered that all nations and peoples are populated and governed by human beings.  All foreign nations and peoples, it must always be remembered, are endowed with the ability to make choices--and it's time to choose.

And we are also endowed, and bear the obligation, to now make our own choices.

I am aware that many reading this are entirely incapable of compartmentalizing their hatred for either former President George W. Bush and/or current President Barack H. Obama on one hand, and the history and "lessons learned" on the other hand.

Yet, as stated in my last CityWatch article on the Mideast, both Presidents have tried to weigh in and offer democracy's opportunities to the region of the world from Northern Africa to the Himalayas.  Because or despite of their efforts, we now know a few things--regardless of what opinion one might have of either President:

1) The cultures of many in the Middle East are so engrained with tribal warfare and low expectations, that both democracy and peaceful coexistence are foreign to their world view.  They are not blessed with the influence of Rousseau, Locke and Voltaire, or of Buddha or Gandhi, and either we leave them to their eternal warfare or we conclude that the world is getting smaller, and it will be either Western/peaceful culture that predominates, or some other nightmarish culture that destroys the future of the ordinary individual.

2) There are an educated and courageous few in the Middle East--perhaps a small majority, perhaps a prominent minority--that really DO understand that eternal warfare and conflict is an element that need not always predominate in human society.  They can either be left to fend for themselves, or allowed to emigrate from that region to the West, or they can be supported by Western and Western-influenced countries throughout the world.

But the rest of the world and its governments are their own self-determining peoples.  They made choices, and we made choices.  This is 2014, not 1920 or 1950 or even 1980--dwelling on irrelevant events that have little to no bearing on our present day is distracting, not educational.

Iraq was created by a British colonial power that threw together three regions--dominated by the Kurds in the north, the Sunni Muslims in the middle, and the Shiite Muslims in the south.  Unfortunately, the decision of Iraq's elected leader, al-Maliki, to be a Shiite thug to counter the former thuggery of the late Sunni thug Saddam Hussein has called into question whether Iraq can remain a single country.

The Kurds in the north have made a decision--to choose democracy, coexistence and economic development.  They want their own autonomy, if not their own nation--in the same way that Israel and Palestine have sought their own nations.

As Turkey slides away from the secular West under the rule of its current leader (Erdogan), and as neighboring Syria and Iraq slip into chaos, the time for a UN-recognized Kurdistan appears as timely as ever.

The central Sunni region is falling under the influence of the caliphate-wannabe entity that is ISIS (Islamic State of Iraq and Syria), which has now expelled and threatened the Christian population with death and is also a major threat to its Kurdish and Shiite neighbors.

Al-Maliki will not step down to allow Iraq to politically unify--despite his unpopularity, and although the Kurds and Shiites (the latter influenced by the more constructive Shiite Ayatollah al-Sistani) are resisting ISIS, it appears that those Sunnis and other Iraqis who would restore Iraqi peace and unity will not return until al-Maliki goes.

They all made, and must again make, choices in Iraq--so, too should Iran.  As the Iranian government continue to play the West for fools while enriching enough uranium to make itself a nuclear power, both President Obama and the rest of the world's leaders will have to demand more, and not delay results for political reasons.

Otherwise, to allow an Iran endowed with nuclear weapons is to create an inevitable and frightening Israeli/Iranian conflict (which is already being fought in proxy in Lebanon and the Gaza Strip).

Pakistan and Afghanistan will have to make their own choices:  whether to recognize and fight the harsher elements of the Taliban (who, for the most part, have gone beyond local Pashtun tribal influences to become as close to "the new Nazis" as any entity we've ever seen in modern times), and reject their influence...

...Pakistan and Afghanistan can remain pariah states and havens for terrorist entities, and/or to give into them the same way that Nazi Germany gave into the National Socialist party borne of 1930's economic and political misery.

Libya has its own choices--with its strongman Khadafy dead and gone, it will have to decide whether to coalesce under democracy, or to slide into tribal and Islamist culture.  But the decisions made by its eastern neighbor, Egypt, provides a more hopeful future than its current descent into chaos.

(It's hard for some to distinguish modern Islam from backwards, power-driven Islamist theology, but it's neither fair nor accurate to lump Islamism--the modern-day successor to fascism, anarchism, and communism for those angry and disaffected by modern society--from an Islam struggling to keep up with modern times and multicultural influences.)

Egypt has made its decision clear--and is arguably the best, if not the most painful, decision to eschew Islamism and its associated regressive theological and political practices.  It has rejected the democratically-elected Morsi and his Muslim Brotherhood, and coalesced under al-Sisi and the military that once kept alive Egypt's hope for a modern society under the late Anwar Sadat and the deposed Hosni Mubarak.

The civil rights of those who adhere to the Muslim Brotherhood will assuredly be shredded, but one must wonder what Nazi Germany would have had to do to prevent Adolf Hitler from leading Germany and Europe and the world into World War Two.

The Palestinians will have to make their choices, as well:  Yasser Arafat left the Palestinians in refugee camps while he enriched himself into a billionaire, and threw away the Clinton-era offer of peace and started a second intifada from which the Palestinians have yet to recover.

Arafat's successor, Mahmoud Abbas, is by far the better statesman and human being than Arafat, ever was, and he will have to make the courageous choices to create a Palestine--which is as necessary for regional peace as is the establishment and security of Israel.

Unfortunately, Mahmoud Abbas has also inherited Arafat's corrupt Fatah political party, which has as its alternative the degenerative and violent Hamas that delights in using Palestinian children and civilians as human shields while provoking Israel into fighting--and by using kidnapping, firing missiles at civilian targets, and other tactics which would make ANY nation defend itself.

Israel has also now made its choices--to invade Gaza, with a civilian body count that is nightmarish and horrible, but the old adage "War is Hell" is entirely true.  And this is truly War that we're seeing in the Gaza strip.

Israeli leader Benjamin Netanyahu, as did Palestinian leader Mahmoud Abbas, rightfully condemned the kidnapping and killings of the three Israeli rabbinical students as well as the Palestinian teenager who was horribly killed by a very rare collection of young Jewish radicals.

Netanyahu phoned the father of the slain Palestinian teenager, placed his name on the list of Israeli victims of terrorists, and pursued aggressive legal prosecution of those who killed that Palestinian child.

Arguably, the only thing Mr. Netanyahu should have also done is bulldozed the homes of the Jewish perpetrators in the same manner that Israel does to the family homes of Palestinian terrorists, but the death of that Palestinian teenager was a wakeup call for the Israelis--terrorism is NOT to be condoned or accepted as part of Jewish behavior or life.

And Mr. Netanyahu and the Israeli leadership made the choice to unilaterally accept an Egyptian ceasefire, which Hamas chose NOT to accept, and which has sealed Hamas' fate and demanded an Israeli incursion.

Both Israelis and Palestinians will now die, and therein is the call for the United States and the West to make their OWN choices on how to proceed in an increasingly-violent Middle East, and in a world that is growing ever-smaller to the point where leaving local entities to sort out their own differences becomes increasingly difficult and unrealistic--if not unreasonable and unwise--to do.

President Obama, Secretary of State John Kerry, and UN leader Ban-Ki Moon, can either reward Hamas and anti-Semitic propagandists to portray Israel as the enemy...or (just as bad) to establish a moral equivalence between Hamas and the nation of Israel...

...or they can lead the modern and civilized world into demanding that the hiding of missiles and soldiers in schools, religious institutions and civilian targets be outlawed as a violation of civil rights that should NOT be at all tolerated in our modern world.

The U.S. and the West can lead the world into declaring a Palestine and Kurdistan that represents their diverse civilian populations, even if they must make the painful and nightmarish moral decisions to crush regressive entities such as the Muslim Brotherhood in Egypt.

And the U.S. and the West can provide fiscal and infrastructure assistance to those nations and peoples that recognize and fight for civilized behavior, and which shun tribal warfare and the elimination of a better economic future for their people, to provide moral and tactical support for those local leaders willing to lead their nations into the modern world.

These are NOT easy choices, and these frightening but necessary require much soul-searching and historical reference.

But just as foreign nations and peoples have made their own choices in 2014, it is now time to make our own choices here at home.

We are all human beings, endowed with the ability to choose.  And the choice MUST be made by the United States of America, and by those who demand that Western and humane civilization remain dominant on Earth in this ever-changing, and ever-more-dangerous, 21st Century.

(Ken Alpern is a Westside Village Zone Director and Board member of the Mar Vista Community Council (MVCC), previously co-chaired its Planning and Outreach Committees, and currently is Co-Chair of its MVCC Transportation/Infrastructure Committee.  He is co-chair of the CD11 Transportation Advisory Committee and chairs the nonprofit Transit Coalition, and can be reached at Alpern@MarVista.org .   He also does regular commentary on the Mark Isler Radio Show on AM 870, and co-chairs the grassroots Friends of the Green Line at www.fogl.us .   The views expressed in this article are solely those of Mr. Alpern.)