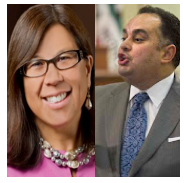 CALBUZZ-Former Assembly Speaker John Perez is a bully. He was a bully as Speaker and he’s a bully now, wielding his financial advantage over State Board of Equalization member Betty Yee to use California’s screwed-up election law to cherry pick precincts in hopes of overcoming the 481 votes by which he took third place to his fellow Democrat in June’s election for Controller.

When he announced he would be seeking a recount, he issued a statement about how important it is “to ensure that every vote is counted” and how he had made “the defense of voting rights a core part” of his career.

What a bunch of self-serving clap-trap. Perez isn’t interested in ensuring that every vote counts – he wants to manipulate the vote count in the precincts where he performed best in hope of overturning the tally and making the November runoff against Republican Ashley Swearengin, the mayor of Fresno.

Yee, as decent and intelligent person you can find in politics, has been remarkably restrained in her reaction, and in the meantime has picked up the endorsement of the California Democratic Party — along with some much-needed cash — and won the respect of myriad others who see her as the actual second-place finisher.

How stupid does he think we are? Perez didn’t even show up for the CDP’s endorsement meeting. He’s so arrogant that he figures he can just throw his enormous weight around and power his way to victory, starting with his vote count in those great Democratic bastions that he selected – Kern and Imperial counties.

His supporters argue that he’s only doing what the law allows and that it’s every candidate’s duty to fight to win. Fine, but if you use a broken – and likely unconstitutional – law to selectively recount the vote where you think it’ll do you the most good, just don’t insult the voters by claiming it’s for some civic-minded cause.

As our friend Garry South, as ruthless a Democratic political consultant has you can find on the right side of decency, told Calbuzz:

“There’s no doubt the California law on recounts is completely screwed up and needs to be totally rewritten. But it’s another thing for a defeated candidate to try to take political advantage of the weaknesses of that law by covering it with high-sounding rhetoric about an obligation to make sure every vote is counted — but only in the counties and precincts where he won.”

And as Becky Curry and Jamie Beutler argued in the Sacramento Bee on Tuesday:

A recount threatens to undermine what most Democrats consider a core value of our party – putting the public interest ahead of self-interest. This is not the first time Pérez has put his own goals ahead of party unity. This spring he ignored advice from party elders not to demand a vote seeking endorsement over Yee at the party convention in Los Angeles. Pérez, from Los Angeles and then still the Assembly speaker, pressed ahead with the motion to endorse – and lost, capturing less than 50 percent of the ballots. Calling off the recount now would only work to his advantage. It’s not too late to show party unity and back Yee with all the resources he’s got.

They’re being way to nice.

The ultimate sore loser: Perez thought he could blow by the talented Ms. Yee with a lackluster campaign and his ample political presence. Wrong. Betty eked out a slight victory that Speaker Bully Boy doesn’t want to accept – even though the Secretary of State now says the recount he’s asked for in 15 counties could take until after the November election.

Stand down, Mr. Erstwhile Speaker. And pray that if you ever seek higher office again, you’ll be seen as having done something gracious for your party.