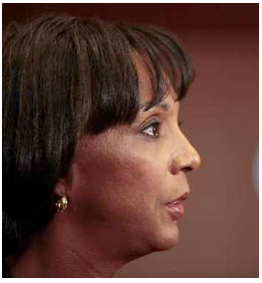 INSIDE INGLEWOOD-Despite a number of evidence-laden complaints regarding illegal behavior and unlawful acts in Inglewood, a pattern of inaction appears to be emerging from LA County District Attorney Jackie Lacey’s office. Lacey is Los Angeles County's first African-American district attorney.

Fu-Gen is believed to assist the DA with investigations. The owners, Glenn and Marsha Brown are residents of Baldwin Hills.

In the story, Lacey’s office stated that the statute of limitations has run out regarding the deliberate misuse of school funds for political activity. Sources at ISUD familiar with the case claim that the DA had plenty of time to pursue charges with distinct knowledge of the activity but refused to pursue an investigation.

A later case, however, remains with the four-year statute of limitations but appears to not be under investigation by the DA.

That case is based in a civil suit that had been brought in 2012 by former IUSD Chief Operating Officer (COO) Robert Guillen. The DA’s office is well aware of the case, as one of the many pages of documents obtained by this journalist was a letter from Los Angeles law firm Gibeaut, Mahan & Briscoe representing Guillen dated March 28, 2012. In that letter, it was stated, “[p]laintiff did not receive a response from the Los Angeles County District Attorney office regarding his April 2011 documents concerning illegal activities of IUSD Board Members. He also delivered the April, 2011 documents to Mr. Dave Babcock, Detective, and Ms. Jennifer.”

The case involves allegations–and evidence supporting them–that Butler was responsible for accepting campaign contributions from Bakewell Company CEO Danny Bakewell, Sr., whose partnership with Turner-Bakewell was thereafter awarded a contract regarding construction of IUSD’s La Tijera School in Ladera Heights. La Tijera was built in 2010 and was the subject of many financial problems as well as at least one lawsuit by former IUSD Chief Operating Officer (COO) Robert Guillen. The case also alleges that a company that had originally been awarded the bid was pushed out and replaced by Turner-Bakewell shortly after the campaign contributions had been received by Butler.

According to California Secretary of State Debra Bowen’s Web site, McKinnor is also the CEO of a firm named The McKinnor Group which was employed by a PAC named California Friends of African American Caucus which sent out a number of e-mails supporting McKinnor’s candidate, Burke.

Presented with the evidence of McKinnor’s violations of Federal Election Commission (FEC) laws, the DA refused to investigate the activity, stating, “[t]he information provided does not provide enough facts to warrant any type of criminal violation that the Office of the District Attorney would file.” On the DA’s Web site, it clearly states that “[b]ecause the integrity of the election process is crucial to a free and democratic society, the District Attorney’s Office must be vigilant in enforcing all laws that regulate the election process.”

In June, Butts had two half-page political ads in two editions an Inglewood paper that has in the past had an annual contract totaling approximately $120,000 with the City of Inglewood. (The paper under review is also owned by Butts’ former paid campaign consultant, Willie Brown.) In each ad, it was stated, "Paid for by James Butts for Mayor • Campaign ID# 1325645.” The ads also displayed that which California state elections code explicitly states are not legally allowed in political ads: the city seal, the mayor's official title thereunder and a logo of the City of Inglewood from 2009.

California state elections code 18304 states: “(a) Any person who uses or allows to be used any reproduction or facsimile of the seal of the county or the seal of a local government agency in any campaign literature or mass mailing, as defined in Section 82041.5 of the Government Code, with intent to deceive the voters, is guilty of a misdemeanor. (b) For purposes of this section, the use of a reproduction or facsimile of a seal in a manner that creates a misleading, erroneous, or false impression that the document is authorized by a public official is evidence of intent to deceive. (c) For purposes of this section, the term ‘local government agency’ means a school district, special or other district, or any other board, commission, or agency of local jurisdiction."

Despite the ads clearly being paid political ads that illegally display a city seal, the DA has refused to investigate, stating, “The ad … does not attempt to deceive voters because it is not a campaign advertisement.”

Butts also claims in sworn affidavits filed with the LA County Registrar Recorder/County Clerk that he lives at a residence on 102nd Street in Inglewood. Evidence and neighbor testimonies, however, clearly indicate that Butts remains in residence in Ladera Heights, an area outside of Inglewood. State law requires that elected politicians live within the district they are sworn to serve.

Nevertheless, the DA has consistently refused to investigate the possible “falsification of candidacy papers.”

All of the people whom Lacey has been asked to investigate and which her office has refused ago investigate are African American.

It should also be noted that Butts went to high school with Lacey’s husband, David Lacey. Reached via e-mail and asked “if the husband of District Attorney Lacey has or has had, for any length of time, any relationship—personal, professional or otherwise—with Inglewood Mayor James T. Butts,” the DA’s office responded, “Neither the District Attorney nor her spouse has a personal relationship with the Mayor of Inglewood. The District Attorney's spouse attended high school with the Mayor of Inglewood. They were never personal friends.” The DA did not comment on a possible professional relationship between Butts and her office.

(Randall Fleming is a veteran journalist and magazine publisher. He has worked at and for the New York Post, the Brooklyn Spectator and the Los Feliz Ledger. He is currently editor-in-chief at the Morningside Park Chronicle, a weekly newspaper based in Inglewood, CA and on-line at www.MorningsideParkChronicle.com.  Mr. Fleming’s views are his own and do not reflect the views of CityWatch.)