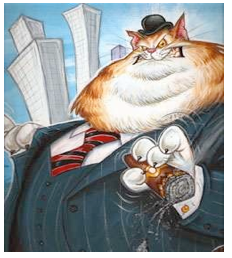 CORRUPTION WATCH-On Sunday, June 29, 2014 the Los Angeles Times ran an article in its business section titled "Comcast's Growing Reach". On both Friday and Saturday preceding the running of this article the Times advertised this piece as an insight into the issues surrounding the proposed merger of Time Warner and Comcast. What a grand disappointment. The article seems to be written by Comcast’s PR department.

The article mentions that after their Time Warner takeover, Comcast would control most of the major urban markets in the United States for both cable television and Internet, as if this was a good thing. The only true competition to cable television is the Internet, but the article failed to mention that fact. The important issues of net neutrality and media consolidation were simply glossed over with a few words. How can the issue of one person, Comcast CEO Brian Roberts, controlling 50% of the Internet in the United States not be a major issue? Faux journalism.

After the proposed merger Comcast will control 1.5 million homes in the Los Angeles area for both cable television and Internet. Does the City of Los Angeles have a position regarding this merger or has it just kept quiet in order to maximize its political contributions? The growing reach, which is spoken of, is the growing control of the lives and media of all the citizens in Los Angeles and most other major urban markets.

The article discusses Comcast as an evolving player in the tech industry. While they may be evolving they are not evolving into a major player, they are already the major player. As evidence of Comcast's evolving participation in the technology field the article points out that Comcast has more software engineers than any other cable television company. That would only seem to make sense since they are the largest cable television company in the country by far. That is not news but simply faux journalism.

The article wastes time telling us about the cafeteria for Comcast employees as well as the new large office building they plan to build in Philadelphia. Do we really care about this? No! The issues that are important to us are net neutrality and the consolidation of media.

Comcast claims they will not compete with any system that is owned by Time Warner.  This goes without saying since cable television systems in major metropolitan areas were illegally awarded as government-protected monopolies.

Local governments were able to create monopolies that private enterprise could not. They were created by politicians who received large political contributions in order to protect the monopolies that were issued in violation of the United States Constitution. The monopoly cable companies were able to pay pennies on the dollar (through political contributions and other gratuities) for the economic benefits that it received.   You and I pay the price. The taxpayers are the ones now paying the price for these grand monopolies created by cities such as Los Angeles. Los Angeles alone spent more than $10 million to protect illegal monopolies for cable television companies. The US Supreme Court in the case of Preferred Communications vs City of Los Angeles established the protection for competition but was ignored by the City.

As Comcast has taken over the Internet it is now seeking to end the concept of “net neutrality” by having the FCC institute laws and regulations that will effectively give them control of the Internet. In the brief discussion of opposing viewpoints the important issue was hidden in deep into the article. It stated, "Comcast is cornering a market…the Internet and the flow of information".  Cable television, as it exists today, was created by the corruption of local governments, being led by the City of Los Angeles.

Allowing one company to purchase government as is being done by Comcast on the federal level is a major danger and a disgrace to free enterprise and our Constitution. This corruption is now being extended to the federal government and the FCC in order to take even more control. The current chairman of the FCC, Tom Wheeler, was the chief lobbyist for cable television and the former chairman of the FCC, Michael Powell, is now the chief lobbyist for the cable television industry.

The proposed changes of the net neutrality laws are designed to provide additional revenue to the cable television industry whose revenues from cable television are declining annually. That increased revenue must come from us. The free market be damned, buying politicians is the new economy.

● Clinton Galloway articles you may have missed.

(Clinton Galloway  is the author of the fascinating book “Anatomy of a Hustle: Cable Comes to South Central LA”. This is another installment in an ongoing CityWatch  series on power, influence and corruption in government … Corruption Watch. Galloway is a CityWatch contributor and can be  reached here. Mr. Galloway’s views are his own.)