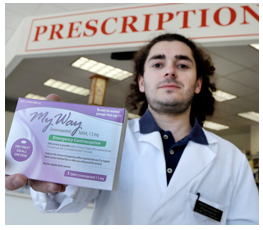 TRUTHDIG-Set aside the U.S. Supreme Court’s radical determination that a for-profit corporation is a “person” with protected religious beliefs. The real shame is that last week’s ruling ignores the real people involved—women, yes, but also their male sex partners.

Contraception has long been regarded as a “women’s issue,” but the reality is that women, apart from addressing certain health needs, use contraception because they are in sexual relationships with men.

The men in those relationships have—or should have—a big interest in women’s access to reliable and affordable birth control. But that’s often too little in evidence.

This was especially so in the atmosphere surrounding the Hobby Lobby decision and its aftermath. The case stemmed from the family-owned corporation’s religious objection to providing full contraception coverage for its employees.

Look at crowd photos taken outside the Supreme Court when the case was argued last March and, again, when decision was announced June 30. Most of the men in the pictures are Hobby Lobby supporters, holding signs with anti-abortion and religious-freedom slogans or picturing fetuses.

Men are harder to spot amid the “Birth Control Not My Boss’s Business” signs, among those who argued that Hobby Lobby should not be able to opt out of the birth control mandate in the Affordable Care Act because of the religious beliefs of the company’s owners.

Our highly stratified political system is partly to blame. Within hours of the court’s announcement, my email inbox was flooded with outraged messages from advocacy groups and politicians, slamming the decision and asking for donations to support individual candidates or campaigns to promote contraceptive access. But my husband, who is on many of the same email lists, didn’t get most of those pitches.

I guess that as a man he’s not expected to care as much about this issue, so why bother to send him solicitations.

Even before the Supreme Court decision, Democratic candidates—including U.S. Sen. Kay Hagan, in a tough re-election fight in North Carolina—focused on female voters, particularly single women, who they believe will care more about the issue than do men. But shouldn’t the availability of reliable, safe contraception matter just as much to men? Shouldn’t the Hobby Lobby case be no less important to them?

Surely American men care deeply about whether or when to become a father, family size, the timing of births and the connections between the number of children and a household’s overall economic health. In the face of the exploding cost of sending a child through college, most fathers do not need to be convinced that there’s a big difference between having two children and having four.

The 5-4 Hobby Lobby decision is profoundly troubling because the court’s conservative majority ignored scientific evidence, and not for the first time. Back in 2007 these five male justices—Samuel Alito, John Roberts, Antonin Scalia, Clarence Thomas and Anthony Kennedy—upheld the federal ban on late-term abortion on the basis of dubious congressional findings and their own ill-founded personal beliefs.

For example, the majority in that case, led by Kennedy, simply and casually dismissed medical experts who maintained that the procedure at issue was sometimes necessary to preserve a woman’s health and fertility, and the five justices accepted some of the widely challenged arguments of handpicked anti-abortion experts who had testified before Congress in support of the ban.

In addition, Kennedy and his majority colleagues found it “unexceptional” that women who have abortions are susceptible to “severe depression and loss of esteem”—even though the justices acknowledged that the court could “find no reliable data to measure the phenomenon.”

The same shabby reasoning was on display in last week’s decision. At the center of the Hobby Lobby case was the federal mandate for employer coverage of four contraceptive methods—two so-called “morning after” or emergency contraception drugs and two types of intrauterine devices (IUDs).

The majority, this time led by Justice Alito, implicitly bought Hobby Lobby’s conviction that because these methods prevent a fertilized egg from implanting they equate with an abortion. Never mind that the American College of Obstetricians and Gynecologists has repeatedly held that a pregnancy does not occur until the egg has implanted.

The decision has reignited rhetoric about a Republican “war on women”—apart from the Republican war on the Affordable Care Act. The Hobby Lobby case follows 2012 campaigns during which GOP presidential candidate Mitt Romney, at one point, said he would support federal legislation allowing employers to refuse for moral reasons to provide insurance coverage for employees’ birth control and during which some other Republican candidates displayed shocking ignorance and insensitivity.

Remember when then-U.S. Rep. Todd Akin, running for the U.S. Senate, insisted that “legitimate rape” is “really rare” and that if it happens “the female body has ways to try to shut the whole thing down”? He lost his Senate bid, as did Richard Mourdock, the Indiana state treasurer, who declared his opposition to abortion even in cases of pregnancies caused by rape because “it is something that God intended to happen.”

Their preposterous pronouncements made for great late night comedy fare but were emblematic of those forces in the nation that hold birdbrained views on sex and reproduction and would deny contraception to millions of American women and their partners.

Last Thursday the court compounded its wrongheaded Hobby Lobby decision by temporarily exempting an Illinois Christian college from the federal mandate to cover contraception for students.

The brief, unsigned order, presumably from the conservative majority, drew a furious response from Justice Sonia Sotomayor on behalf of herself and the court’s other two female justices; the three women, along with Justice Stephen Breyer, dissented in the Hobby Lobby case. The order to temporarily exempt the college, Sotomayor wrote, “will presumably entitle hundreds or thousands of other objectors to the same remedy.”

Clearly, the debate over contraception and legal abortion is far from over. If women are to retain safe, accessible birth control, men too need to speak out. Men need to remind politicians that this is a ballot-box issue for them too. And women need to remind their male partners that contraception is a mutual responsibility.

Almost 25 years ago, in a case many conservatives hoped would directly overturn Roe v. Wade—but didn’t—then-Justice Sandra Day O’Connor observed that “the ability of women to participate equally in the economic and social life of the Nation has been facilitated by their ability to control their reproductive lives.” The stakes were just as high for men then, and the stakes are just as high for men now.