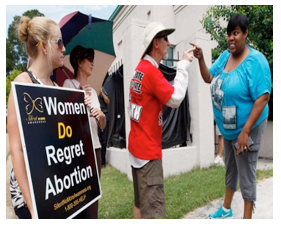 WOMEN’S RIGHTS-Abortion clinics are not safe places - anti-choicers have ensured that - and if women are going to be free from harassment, the fight must go on.

Imagine trying to walk into a building, trying to get a medical treatment – and someone screams at you. Someone is two inches from your face – two feet from the front door – and that someone is videotaping you, calling you a whore.

There's ketchup poured in the snowbanks around you, made to look like spurted blood. You try to take a step forward, but people block your way, yelling that you're going to be "mother to a dead baby". They hold signs in your faces, whisper "murderer" in your ear as you pass. Maybe they shove you.

Don't believe portrayals to the contrary – from anti-choice activists and the news media – that these kinds of protestors outside abortion clinics are not grandmas praying, or kindly "counselors" who just want to talk reasonably to women. These people wait outside clinics to shame and to harass; they are there to scare.

Despite the horrifying experiences of women across the country trying to obtain abortions, the US supreme court ruled unanimously on Thursday that a Massachusetts law providing a 35-foot buffer zone outside of clinics is unconstitutional, and violates protesters' first amendment right to engage in "personal, caring, consensual conversations" with women seeking abortions.

Katie Klabusich, a reproductive rights activist who has volunteered as an escort at six clinics across the country, tells me she is "terrified".

Before a buffer zone was enacted at one clinic where she volunteered in New Jersey, Klabuish says it took six or seven escorts to protect a single patient and her companion from picketers yelling racist and sexist epithets in their faces.

"You could still hear them yelling in the procedure room," she told me on Thursday after the decision in McCullen v Coakley.

Klabusich says the lack of a buffer zone was particularly difficult when women would come to the clinic after a medical transport from the hospital - most with wanted pregnancies that had put their health or life in danger:

These are women in obvious physical distress, and I've seen seven or eight picketers surround a medical van so a sick woman couldn't get to a doctor. This is what buffer zones help to stop.

According to a statement by Dr Nancy L Stanwood of Physicians for Reproductive Health, nearly 90% of abortion providers report that patients in their facility have "expressed concerns about their personal safety," and over 80% of clinics have called police because of safety concerns.

Abortion providers aren't trying to limit free speech – they're trying protect their patients from what has become a gauntlet of terror. Thursday's ruling may not eradicate all buffer zones overnight, but it gives protection to those who need it least, while ignoring the vulnerable women who are being harassed and intimidated for exercising a legal right.

Let's please not forget the arson and bombings of clinics, the threats of anthrax, the shootings and - of course - the multiple murders of abortion providers and clinic employees. Abortion clinics are not safe places - anti-choicers have ensured that - and if women are truly to have the right to seek abortions free from violence and harassment, they need to be.

The supreme court's decision is not as unanimous as it may seem, and it is not the end: pro-choice activists are expressing outrage, sharing stories and organizing on the Twitter hashtag #protectthezone, and Planned Parenthood president Cecile Richards says that the Planned Parenthood Advocacy Fund of Massachusetts is "already working with legislature on a new bill to protect women from harassment".

But for the women seeking abortions in the days and weeks to come - and for the providers, workers and volunteers who put their lives on the line every day to ensure women have access to safe medical care - this ruling will impact them immediately. It will make women less safe, doctors and clinic workers more fearful, and violent harassers emboldened. This is not the "free speech" we're fighting for.

(Jessica Valenti writes for The Guardian … where this column was first posted.)