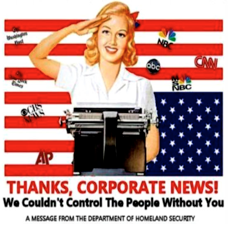 CERDAFIED-Thomas Jefferson wrote, “The basis of our government being the opinion of the people, the very first object should be to keep that right, and were it left to me to decide whether we should have a government with newspapers, or newspapers without  government , I should not hesitate a moment to prefer the latter.”

Jefferson was not above contradicting himself when he also lamented, “The man who never looks into a newspaper is better informed than he who reads them, inasmuch as he who knows nothing is nearer to the truth than he whose mind is filled with falsehoods and errors.”

So, with that in mind, I ask that you humor my contradictions presented herein.

Of all our freedoms, freedom of speech is most important, as it reveals earnestly the man and his thoughts. Thought is elevated by discourse where disagreement is explored. Sharing the same opinion may be enjoyable but it does not provide growth. It does not hone the tongue or the mind, and it hastens the delivery of real analysis.

It is natural then that the freedom of press should be equally regarded and difference of opinion should be revered.  Hence it serves no purpose to place government monitors in newsrooms as formerly planned by Federal Communication Commission (FCC) under the influence of the Obama Administration.

FCC Commissioner Ajit Pai revealed to the Wall Street Journal the questionable proposed monitoring.  The FCC’s proposed initiative, "Multi-Market Study of Critical Information Needs," or CIN, would have placed researchers in newsrooms to determine which stories they run and why.  Under scrutiny, station owners, editors, and reporters would have been asked to justify content and priority.

How is this different from corporate filtering and bullying? Hasn’t mainstream news content become non-essential fluff under corporate control? Should we feel compelled to come to the rescue of mainstream news when mainstream news ignored every significant battle American’s have had with the government and big corporation? Where was Ron Paul’s coverage of his presidential campaign?  (Read the rest here)