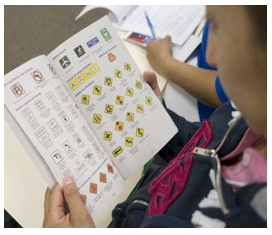 IMMIGRATION-Juan Carlos López still has a picture of his family's first car: a 1974, Dodge Duster. They purchased it when they got to Los Angeles from Mexico in the 1990s, he says.

Lopez was 15 at the time and helped his dad buy the Duster with money from his after-school job. But this story doesn't have a happy ending.

You cannot get a California license if you don’t have the legal papers to live in the US. That means every time one of the state's more than 2 million undocumented immigrants takes the wheel, they're breaking the law.

But that’s changing. A new law in California — following the lead of several other US states — will let undocumented immigrants get licensed starting next year. For these immigrants, the law means more than just avoiding a ticket.

"It also means to be more sure of themselves, to be able to freely go from one place to another without the fear of getting stopped, and getting your car confiscated," says Armando Botello, spokesperson for California's DMV. "I think it's very, very important for them."

Botello also adds that licensing undocumented drivers is the best way to make sure they are driving safely. That makes sense — if they can pass the test. When undocumented immigrants took Nevada's written driver's test this year, most failed.

There are concerns that could happen in California too.

"They are not prepared yet," says Carlos Sada, head of the Mexican consulate in Los Angeles. Since most undocumented immigrants in California are from Mexico, the consulate is taking the lead in getting Spanish-speakers prepared. They have handed out DMV practice tests and, Sada says, the results aren’t good. It's not that people don't know how to drive. "In Mexico, it's harder to drive," says Sada. "If you come from Mexico or Mexico City you are like a Ph.D. in driving."

But people who learn how to drive outside of the US may not know US laws. "Of course they know how to drive. But do they know the rules? That is a problem," Sada explains.

The Mexican consulate is working to help immigrants prepare for the exam. Community groups, colleges and the DMV are also preparing. Along with developing practice tests, there is a smartphone app and English classes especially designed to prepare immigrants for the driver's test. There is also an audio version of the driver’s manual for people who can’t read and write.

On a recent Saturday morning, I visited one of the prep classes, watching as a roomful of undocumented immigrants buckled down to study. They went through sample test questions, learned speed limits and rights of way.

López, whose family lost their Dodge Duster all those years ago, taught the class. He eventually got a green card, and a driver's license, and now he's a driver's ed teacher.

López asked the students if they drive already. A roomful of hands went up.

Student Eliseo Toledano, 40, learned to drive when he came to California from Mexico 12 years ago. He has never been to driving school and says he was learning a lot about the rules in the class. He couldn't wait to take the test. The police have stopped him three times and taken away his car for driving without a license, he says.

Another student, Elisabeth Silverio, says the new California law meant a "big opportunity." She says she has waited for year to be able to drive without worry in the United States. As a single mom, she says she has had no choice but to drive, licensed or not. She added that she has played it as safe as she could. Years ago, she got herself a copy of the California driver's manual.

"I studied the book without a license, for my own security, and for my daughter's," Silverio says.

Getting prepared for the test may be all it takes. In Nevada, now that word is out that the written test is something you have to study for, undocumented immigrants there are now passing the exam at about the same rate as everyone else.

(Valerie Hamilton reports for PRI’s The World. This piece was posted most recently at newamericamedia.org) Photo Credit: Marcus Teply