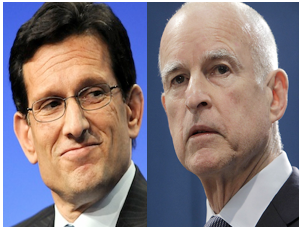 Money Isn’t Everything First, while it’s true that  Brown has tons of money — more than $20 million is the latest count — Cantor also had lots of money. He spent $5 million on his campaign, compared with the $200,000 spent by his Republican opponent, David Brat. And remember, that $5 million was spent in a measly congressional district, not a state with 38 million people. So maybe money isn’t as important as conventional wisdom says it is.

The Western States Petroleum Association, representing fuel producers, says the increased cost to producers could hike gas prices by 12 cents a gallon. Mary Nichols, the chairwoman of the California Air Resources Board doubts cap and trade would have that much of an impact, but another fuel industry spokesman, Jay McKeeman of the California Independent Oil Marketers Association, disagrees, saying fuel producers would not swallow the cost increase, and it would indeed be passed on to consumers.

Crazy Train Finances Third, Brown and Democratic leaders in the Legislature are proposing that 25 percent of the proceeds of future cap and trade revenue be used to fund Brown’s proposed $68-billion-and-counting high speed rail project. That creates an association between a hike in price for gasoline –caused by cap and trade — with high speed rail. A 2013 study by the Public Policy Institute of California revealed that 54 percent of likely voters opposed high speed rail.

In a state with an electorate that cast more than a quarter of a million votes for an indicted state senator running for secretary of state, the “thought” process among a sizable number of voters could be this: Gas price supposed to go up; that ripoff at the pump goes to (ugh!) high speed rail; Jerry Brown is governor; bad governor.

Granted, the issue that riled the rustics in Virginia’s Seventh Congressional District — immigration — is a far cry from gasoline prices in California. But both are made to order for simplistic, emotional campaign themes, as Cantor found out the hard way. And few issues touch a nerve among California voters the way anything to do with driving a car does.

Born-Again Tax Cutter? A proposal from state Senate leader Darrell Steinberg could be a bright spot for Brown. Steinberg — who is not running for re-election because he’s termed out — has suggested a flat 15-cent-per-gallon price hike on gasoline in place of any price increase from cap-and-trade. He’s not likely to get it approved by the Legislature, but if he does, Brown will be presented with an opportunity to veto it at the top of his lungs, thereby establishing his bona fides as an opponent of gas tax increases.

Admittedly, this is all conjecture. For one thing, there is something about Eric Cantor that causes a lot of people to dislike him intensely. Brown may not exude charm, but he’s not despised, like Cantor is. And Brown won nearly three times as many votes as Kashkari did during the June 3 first go-‘round. And, yes, the governor is a master politician. As Lt. Gov. Gavin Newsom recently commented on Brown’s political skill:  “Most of us are playing checkers; he’s playing chess.”

But voters, especially in California, are volatile. And didn’t someone once say something about “A little unconventional wisdom now and then is relished by the wisest men”?

(Chuck McFadden covered politics for The Associated Press in Sacramento. His biography of our very own governor, Trailblazer: A Biography of Jerry Brown is out from the University of California Press. This column was posted first at the excellent CalBuzz.com)