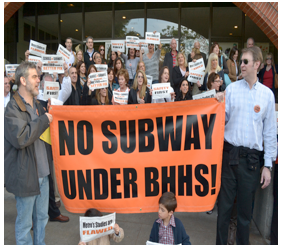 BACK TALK-Joel Epstein’s article is wrong on so many levels that it’s hard to know where to begin a rebuttal.  But if you’re going to try to gloat, at least get your facts straight.

For starters, Joel Epstein doesn't even seem to understand the basic difference between elected bodies, such as school board vs. city council. Little wonder then that he never has understood the concerns that the City of Beverly Hills and the Beverly Hills schools have with Metro's plans.

He suggests that the school board has been misappropriating bond money, and concludes that I should somehow be prosecuted for corruption.  Note to Joel Epstein: the City Council and the school board are separate entities.  I happened to oppose the school bond over five years ago because of various concerns.  I have nothing to do with deciding how bond money is spent.  However, it is my understanding that the school board has separate opinions from bond counsel that spending funds to protect the integrity and buildability of the high school campus is a legitimate expense.

Everyone agrees that it is most unfortunate that Metro would force the school district to spend construction funds on anything other than construction, but Epstein conveniently forgets the ham-fisted tactics Metro has employed in trying to justify its backroom decisions, which effectively have forced the school district’s hands.

Epstein’s implication is that public officials in Beverly Hills are opposed to the subway itself, a rather nasty piece of spin which Metro has done everything in its power to propagate.  It’s simply not true.  If Metro had stuck with the route it had originally planned, which would have taken the subway under the public right of way, there would be no issue whatsoever.  Little wonder that Epstein doesn't seem to understand the basic difference between being supportive of the subway project itself, and having issues with routing, pre-determined "scientific" outcomes, process and Metro's bait-and-switch tactics.

Not surprisingly, many of the same supporters of Metro’s bait-and-switch shenanigans, are now fans of developer JMB’s efforts to ignore the Century City development rules via the most bogus and loopiest of loopholes, thereby tripling the square footage of a Century City skyscraper they are planning on building.  Cha ching.

Learning the way business gets done in LA, Chicago-based JMB has been spreading the money around.  And while all of this may be perfectly legal under the current deficient rules, it certainly also shows that sometimes the greasy wheel does get the oil.

In an extremely blatant piece of revisionist history, evidently inspired by Lewis Carroll, soon to be ex-county supervisor Yaroslavsky, who is also on the Metro Board has said that his intention when he helped draft the Century City development rules on the LA City Council years ago was to allow just this sort of developer giveaway.

Though he thereby may be giving the district’s current LA councilman Paul Koretz cover against charges of developer giveaways and against angry resident groups who are going to have to deal with the traffic impacts, Yaroslavsky gets an “F” when it comes to logic and common sense.  As if tripling the permissible square footage with mainly office uses wouldn’t generate the kind of traffic which … tripling the square footage with office space would generate, using the current standards, i.e. the same ones that apply to everyone else.

It’s amazing how often elected officials can get away with simply denying common sense, rewriting history, and treating the rest of us like idiots.

Epstein has long acted like Gollum, seeming to regard the Purple Line (he calls it the “Subway to the Sea” even though there are no current plans for the line to go beyond the transit-centric VA…) as “his precious,” with little to no regard for facts and/or process in his quest.

Not much has changed, so it is perhaps little wonder that he still doesn't really have a concept of the meaning of true transparency and accountability. Having been on Metro's payroll (which should be disclosed every time he writes a Metro-related article), he does seem to understand the Metro-Machiavellian "end justifies the means" mentality, but he clearly is confused about good governance.

He is right that money doesn't grow on trees, and if the residents of Beverly Hills are unhappy with how the school bond is being spent, they can vote the board members out of office.

If the people of LA County are unhappy about how Metro spends its billions of dollars (including the additional $200+ million that Metro will spend to tunnel under the high school vs. the previous route), they have no such recourse. We don’t have the ability to vote Metro board members out of office.

Good that Joel Epstein has discovered the Los Angeles Register. Maybe he missed the following article, which speaks to accountability and explains why we should be directly electing Metro board members.

In the Bay Area, the BART directors are directly elected, and BART is considered to be one of the most well run transit systems in the nation.  Shouldn’t we in LA County have the same ability to directly elect our own transit representatives?

Doesn’t a $5 billion annual budget, not to mention the ability to put bonds and taxes on the ballot (the latest proposal in the works could generate up to $90 billion), justify giving the people a direct say in who gets to make the decisions about how to spend those considerable sums of money?

These are probably not questions for those who can’t – or are unwilling – to think for themselves, but there are those of us involved in local government who still feel that process matters.  As Dr. Martin Luther King Jr. once said, “The means we use must be as pure as the ends we seek.”

(John Mirisch currently serves on the City Council of Beverly Hills. As mayor, he created the Sunshine Task Force to work toward a more open, transparent and participatory local government.)