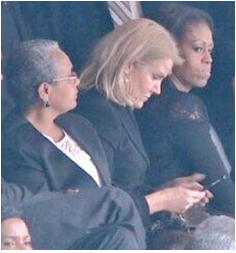 GELFAND’S WORLD-AT&T sells me an internet connection, which includes email supplied by Yahoo and costs me a little more than $80 a month. Yahoo in turn uses my email page to inflict advertising on me. It is that advertising, and its allowance for what has come to be known as the dog whistle, ie: camouflaged racism, that I speak of.

At one time, a dog whistle was just a mechanical device that was tuned to a note so high that only dogs, not humans, could hear it. By the 1990s, the term "dog whistle" was being used to refer to code words and phrases that would be recognized by particular political groups, but not so much by the rest of us. An earlier version of a dog whistle, the term "states rights" had a brief shelf life as a code phrase for segregation. The term didn't last long as a dog whistle, since the rest of the world saw through it almost immediately. In more recent years, political talk about welfare abuse and now even about tax cutting have their dog whistle attributes.

Since the election of the current president, the dog whistling has gotten to be nearly deafening, to mix a metaphor. One of the ugliest examples was the use of a photograph taken at the funeral of Nelson Mandela, back in 2013. At the time, the president was seated with his wife and, among others, the prime ministers of the UK and Denmark. What made this an opportunity for American racists was the fact that the Prime Minister of Denmark was a white woman and, if we can believe the photographic evidence, an attractive one at that. At some point, the president was invited to participate in a group photograph with the two Prime Ministers, the kind of shot we now call a selfie.

Here's how the New York Post covered that event. There are all sorts of underlying assumptions that went into the Post story, most of which are deeply rooted in old racist thinking. Within a few days, the photographer who took the most widely reprinted shot spoke up, explaining that Michelle Obama was not expressing anger or jealousy, and that she seemed perfectly at ease during that period. His photograph of the whole group was misinterpreted in his view, as other photographs taken before and after demonstrated. You can read his account online.

But to the Obama haters, the photograph of the First Lady in an apparent pout was enough, and they took it as just one more bit of evidence for all that is wrong with the president, his wife, and the nation as a whole.

We now come to AT&T/Yahoo. I refer to the two companies in combination, because that's how the logos appear at the top of my email screen. As I have pointed out here before, Yahoo has taken a once serviceable email service and turned it into an advertising medium that doesn't work very well for me, the user. It's slow and prone to freeze-ups, and it extracts my time by forcing me to wait for its ads to download.

One recent ad included, for a start, a blowup of a picture of Michelle Obama sitting next to the Danish Prime Minister. It's from a later moment in the Mandela funeral, and her expression continues to be serious and unsmiling. If you bring your own prejudices to the photo, you might interpret it as showing her frowning at the Prime Minister, although the effect is arguable and certainly subtle.

But that's all that is required for the dog whistlers of this world to get their point across. Show a picture of the president or the first lady -- it doesn't really matter which in the right wing world -- and you get the message if you are of the right mindset.

Before I explore the content of the ad itself, let me jump to the point. I'm saying that my complaint is with that twin colossus AT&T/Yahoo for inflicting time consuming, hard-right wing advertising on me, simply for the right to pay them eighty bucks a month for a little internet service. Yes, I understand that there are some alternatives, or at least one anyway, but right now I have AT&T, I paid them for this service, and I expect them to supply the service without torturing my political sensibilities as part of the deal. Or to put it more briefly, if I want to read the right wing side of things, which sometimes I do, then I'll do it myself, on my own time and according to my own decision.

Anyway, curiosity got the best of me, and I looked into the ad itself. If you click on the link, you get to a page revealing that this is an ad for some kind of investment service. It starts with a whole paragraph titled "Legal Disclaimer," which ought to be a hint. "This work is based on SEC filings, current events, interviews, corporate press releases, and what we've learned as financial journalists. It may contain errors and you shouldn't make any investment decisions based solely on what you read here. It's your money and your responsibility. Stansberry & Associates Investment Research expressly forbids its writers from having a financial interest in any security they recommend to our subscribers. . . . "

And so on. That disclaimer is akin to what science writers refer to, tongue in cheek, as the "quack Miranda warning." You know, "You have the right to remain silent" except tailored to the particular type of quackery or, in this case, informed investment advice.

A little bit of internet research reveals that Stansberry & Associates is the realm of one Porter Stansberry, who seems to be making a pretty good living peddling apocalyptic predictions along with advice on how to survive the predicted future turmoil. It's not exactly a new idea obviously, as the survivalist literature has been with us for several decades. But there's one little poke in the eye that some of you may find amusing.  Let's put it this way -- if anybody tells you that the president will find some excuse to cancel elections and keep himself in office, that's pretty much a giveaway that you're not dealing with somebody who is deeply centered in reality. It's been a nice comfortable conspiracy theory since hippies said it about Nixon, and it's now being dusted off for Obama.

Only this version says that, for some reason, we will experience such economic prosperity that a third Obama term (either the president or his wife, since they seem to be interchangeable in the right wing mind) will become possible.

I could go on a 22nd Amendment tangent, but let's forego the pleasure. A nation that has been holding presidential elections since 1788, without interruption in spite of foreign invasion, civil war, world war, or financial turmoil is not one to put up with a Nixonian coup or economic well being. We put a lot of weight, politically and emotionally, on having free elections, and it would take an asteroid strike or a nuclear war to interrupt the process. And even then, we have legal procedures for getting by.

But let's not go there. We don't have to take Porter Stansberry's more rash pronouncements seriously, and you are free to subscribe to his financial newsletter or not. I think it's more realistic to view Porter Stansberry and his financial advisory service as being the P.T. Barnum of the 21st century. Instead of the Siamese twins and the bearded lady, we have predictions of financial doom juxtaposed with predictions of financial glory. Apparently it doesn't matter which, as long as you plunk down $149 for the subscription.

So what's my gripe? Doesn't Stansberry have a right to buy advertising? Don't I have a right to like it or dislike it as I see fit? Yes on both questions. But that's not my gripe. It's with Yahoo and its partner AT&T. I'd like to be able to have internet service that works, without being pelted with right wing propaganda. There are plenty of places for people to buy right wing propaganda or even to get it for free. I shouldn't have to pay for it as a required part of some other product.

By the way, when I called the Stansberry phone number, the person I spoke to disagreed with me that their ad is racist. At least they pick up the phone. I've never actually been able to have a phone conversation with anybody of responsibility at Yahoo. The person I spoke to at AT&T repeatedly told me that Yahoo is a different company and I should talk to them. Apparently AT&T thinks I have a magic telephone that can get through to Yahoo corporate affairs. Apparently the fact that my email screen has AT&T and Yahoo at the top of the page doesn't mean anything to phone responders.

Addendum: In my previous column, I referred to parking signs stacked one above the other on one pole. Unfortunately, I typed the word "poll" instead of pole. Not only that, but I did it three times in one paragraph. I guess that's the sort of thing that can happen when you write about politics a lot. You get to thinking along the lines of opinion polls instead of telephone poles.

I have my friend Allyson of the Central San Pedro Neighborhood Council to thank for bringing this to my attention. In something over 200 columns and more than 300,000 words, this is the first time somebody has corrected my spelling.

In this regard, I think it's fair to reply to a couple of people who sent in comments to that column.

These were along the lines that if I can't spell pole, then I probably can't read well enough to read parking signs anyway, and shouldn't complain if I get a ticket. I will concede that I've learned to look very carefully at the full collection of signs at any place I try to park.

It reminds me of the exercises we used to do in English classes, where we parsed sentences into the various parts of speech. It also reminds me a bit of my first year taking Latin.

I will concede that the joke is on me for mistyping a simple word, but I would continue to claim that figuring out whether it is or is not legal to park shouldn't have to be so much of a struggle.

(Bob Gelfand writes on culture and politics for City Watch. He can be reached at [email protected])