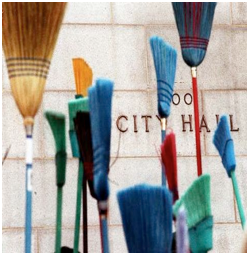 THE BOSTICK REPORT-The high, whiny squeal pierced through the air, cutting the peace like a hot knife through butter. Check that, it wasn’t so much like it pierced the silence. It was more akin to a slowly building soundtrack of insanity.

Five of my neighbors hire the same crew of gardeners. They come every Tuesday and unleash a frenzy of sound for at least 90 minutes strong. It’s a lot of noise for just one lawn mower and a leaf blower.

Do I hate leaf blowers? It’s not so much a hate for leaf blowers, to be honest. My irritation with them is more the knowledge that they are illegal within the city limits of Los Angeles.

● Leaf blowers are bad for people.

Leaf blowers disrupt the peace. The obnoxious revving of the engine while in use is far more disruptive than if it were to keep a constant pace. This “up and down” whininess has strong links to the death of urban bees, confusion in migrating birds, and abnormal levels of stress in my favorite animal species: people.

Leaf blowers increase the levels of airborne particulates in the surrounding area. It isn’t just the brake dust, dirt, and pollen that exacerbate the allergies, asthma, and other respiratory ailments afflicting the immediate neighborhood. Leaf blowers also kick up all of the Round Up, Miracle-Gro, and weed killer sprayed on that lawn. Those poisons, now airborne, are breathed in by anyone in the immediate area.

They’re pointless. First problem is that they blow. If they operated like a vacuum and sucked, then it would make more sense. As it stands, they just push detritus from one yard to the next or into the street. If you want to get that stuff into a bag, then they have to use…. a rake. Maybe cut out the middleman and just use the rake to start with?

● Leaf blowers are used to validate the service.

It’s not just the fact that leaf blowers pollute the air, kill bees, incite unnecessary stress in an urban environment, make dangerous lawn chemicals airborne, increase asthma and bronchitis, and generally disrupt the peace of a neighborhood. The worst thing about leaf blowers is that they seem to be used to validate the cost of the weekly lawn service model.

The more noise, the stronger the perception that work is being done. Think about it. How many leaves fall on your lawn? On your neighbor’s lawn? How many trees are in your immediate area?

As a science teacher, I can attest to the fact that autumn is the season of leaves falling to the ground in mass numbers. There certainly are stragglers holding on into December in a temperate region like Southern California, but for the most part, the heavy shedding of leaves occurs between September and December. After that, the falling of leaves is pretty much over until next September.

Every lawn mower I see has a grass catcher on it. So, what are the leaf blowers blowing other than trash and particulate matter that is better left on the ground – or better yet, in the Miracle Gro bottle to start with?

The answer is nothing. They are blowing nothing. The purpose they serve is to make a sound for 25 minutes per yard because it represents work being accomplished to the person paying for the service, should they be around to hear it. This, in turn, creates a sense of value to the person contracting the service. The fact that the sound requires a machine represents a barrier to entry for the person contracting the gardeners. You see, if the gardener needs this big machine to do the job, then the homeowner needs the big machine to do the job, too. Or, the homeowner could just hire the gardener.

Let me be clear here. This is a perfectly rational economic tool for the gardener to employ to validate the cost of contracted lawn care. It’s actually quite brilliant and I applaud the gardeners of Los Angeles for keying in on this.

But, the use of a gas powered leaf blower is no better for the health of the user than it is for the neighborhood residents. In fact, the people holding onto a running leaf blower every day for hours on end are the ones on the front lines here. Their health is more negatively affected than mine.

● Leaf blowers are currently illegal in the city of Los Angeles.

All of the reasons I give you in this article are the reasons the city council of Los Angeles gave as rationale for banning gas powered leaf blowers within the city in 1998.  But the ordinance is not enforced, clearly.

I recently called LAPD to find out about leaf blower citations. They transferred me to Street Services Investigation and Enforcement. Street Services informed me that while they take complaints about the use of leaf blowers, citations are not currently being issued. They will, however, issue a letter warning the homeowner not to have gardeners use the leaf blowers as they are banned within city limits.

So, I asked what happens if that letter is ignored. Ignoring the first letter results in the issuance of a second letter. Of course, I asked how long that goes on before a citation will be issued. The answer is never. The city attorney’s office is not currently “prioritizing the enforcement of this ordinance”.

I was told by the city attorney’s office that someone would get back to me. That was three weeks ago.

Look, I see the folly of designing a ban that is focused on the use of the machines within the neighborhoods. It’s hard to locate those breaking the law and when you do ticket them, who should pay? Should the homeowner pay for a contracted employee using a banned machine? Should a person struggling to make ends meet on the wages earned from mowing lawns be fined for what is a pervasive, citywide disregard for the ban? How do you enforce a complaint that isn’t witnessed by the issuer of the citation?

These are real problems in the execution of the ban. Personally, I think the ban should be refined. It should not be predominately based on neighbors snitching on each other. Enforcement of the ban should be done through citations to the homeowner by the police department. Patrol cars should be incorporate this potentially lucrative citation effort into their daily routine. They’re certainly able to do this for parking tickets, aren’t they?

The ordinance should also be refined so that it heavily targets the sale of leaf blowers. Fine stores, like Home Depot, that sell gas powered leaf blowers and fine them heavily. Use the fees collected to initiate a buy back program from gardeners.

The worst part of this ordinance is that it exists and was celebrated so heavily when it passed. That created a sense that our irritation with leaf blowers is justified. That sense of righteousness has translated into unnecessary friction between neighbors.

(Odysseus Bostick is a Los Angeles teacher and former candidate for the Los Angeles City Council. He writes The Bostick Report for CityWatch.)