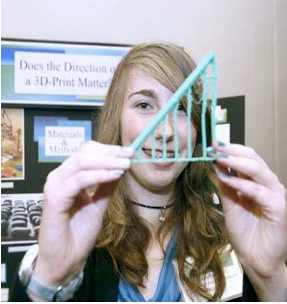 GELFAND’S WORLD-I've just spent the weekend working with California teenagers in two very different venues, getting positive vibes in each case. I don't pretend to have the last word about our nation's future, but it's been an enjoyable experience looking at the work of young scientists and young filmmakers.

Let's consider the young geniuses first. Each year the California State Science Fair holds its finals right here in Los Angeles. We've been getting the applications for a few weeks, and let me tell you, there are some impressive students out there. The categories range from applied engineering to biochemistry to math and physics, with a healthy dose of botany and product science tossed in for good measure.

A fairly typical senior level project might involve a high school student who has been working in a research lab at UCLA or Stanford. Others work at home or in their high school science labs. Obviously we don't expect students at that level of education to be as knowledgeable as professors or graduate students, but what we have seen, year after year, is that the students have developed their skills well enough to get results, and -- this is important to science fair judges -- are able to demonstrate that they understand what they did.

You might argue that high school students who get an invitation to a lab at Stanford or San Diego are not typical, but come from a privileged background. My experience is that it's a mix; it's obvious that some of the students had ready access through their parents' connections, but it is not a universal rule. Some students just turn out to be very bright and very motivated, and they take advantage of systems that put them together with scientists who have volunteered to mentor high school students.

When we go over the applications, we see projects dealing with all manner of modern scientific questions. I personally am more attuned to the life science projects than the math or astronomy projects, and that's a good thing, because when it comes to the physical sciences, a lot of these students fly circles around me in their areas of expertise. But when I chat with my fellow judges who are experts in engineering and astronomy, they explain that they too are impressed with what they see.

I understand full well that when we look at the statewide finalists in science, we are not looking at the average level of high school experience, much less the experience of dropouts. Those are other issues that carry serious questions of their own. But we can say for sure that for some students in the state of California, the door to success is open and inviting. And they are taking advantage of the opportunities. Some of them will form the future braintrust in this state, and they will participate in the making of the next Silicon Valley, whatever that turns out to be.

Perhaps I'm just blessed by getting to see the best of the best, but the take home lesson for junior high students about to enter high school is that if you want the sciences and are prepared, then the system will be ready for you. You had better be willing to put in the kind of time and effort that a student athlete would put into football or tennis, but if you do, the science fair and a career will be waiting for you.

And then there is the cultural issue. California, and southern California in particular, has become the new melting pot for people from all over the world. I understand that ethnic tension and rivalry are a part of our politics, but the science fair contestants represent an admirably diverse collection. We do notice that the children of immigrants are well represented in the young scientist ranks, something that has been noticed for more than a century, starting on the east coast. The phenomenon appears to have moved here, and will have a major impact on local economic growth.

Besides science, there is culture, and I have another story to tell, in this case about performance art. For the past couple of years, the volunteer group known as the San Pedro International Film Festival (Spiff) has been doing an intensive student video production workshop. It starts on a Saturday morning and goes all day for both weekend days. Over those hours, the students are introduced to the idea of story telling and, with the assistance of the faculty, develop a plotline and characters that will be turned into a short film the next day.

The students not only develop the story, they come back the next day to perform as the cast and crew. This year, they were joined on the second day by some alums of the previous year's project. I think the results will be appropriately dramatic and amusing when the film is shown at the San Pedro International Film Festival this October.

It was only in passing, well after working through science fair applications and chaperoning young actors, that a thought caught my attention. The current crop of students we are seeing are all over the place in terms of ethnicity, gender, national origin, the number of languages they speak, and those classifications that our older generations referred to as race. There are a couple of important points to be made.

First, these kids have been raised in a more or less integrated society. They go to the same high schools, and quite a few of them participate at the local Boys and Girls Club. The fact that they have slightly different accents doesn't seem to bother them. This weekend, we had a multiethnic, multiracial group of students and adults working together. And the kinds of tensions and concerns that would have existed in, say, 1958 just aren't there anymore.

I'm always reminded of the rioting and turmoil when the high school in Little Rock, Arkansas, was integrated. Mobs of white people, some of whom are alive today, raised hatred to a rare level. We don't seem to see that kind of attitude very much in southern California nowadays. And the day to day mixing of 50 different nationalities (or maybe it's 100) that goes on in our new melting pot of Los Angeles is obvious.

And our high school dramatic artists are part of that melting pot, and it doesn't seem to bother them.

It's not that the students and parents are unaware that some of us are from Illinois and others are from Costa Rica. It just doesn't matter as much anymore. In modern television, film, and breakfast cereal commercials, things like multiethnic marriage and gay parentage are becoming commonplace. In the science fair, gender does not seem to be an issue, as we have been seeing large numbers of female contestants not only enter, but win major awards year after  year. Let's hope that they can take the revolution into the adult world, which sorely needs a dose of gender equality.

Times are changing, and in some ways, for the better. We can also recognize that in some places our students are being well served and are themselves taking good advantage of educational and artistic opportunities.

I find these advances quite positive. The wider question is whether there are large numbers of students who are denied such advantages, and if so, what we can do about it.