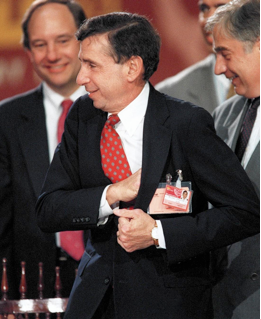 LA POLITICS-Well, Angelenos, we finally have it.  Two of the city’s most prestigious downtown law firms, Latham & Watkins with 2,000 attorneys and Mayer Brown with 1,550 attorneys, have provided the report, A Time for Action, to save Los Angeles from ruin.

A Time for Action is marvelous in its incompetence; breathtaking in its hypocrisy, and rooted Angelenos’ gullibility.

In 1887 Lord Action wrote, “Power tends to corrupt and absolute power corrupts absolutely.”  Los Angeles’s number one ill is too much power concentrated in too few hands so LA2020 Commission Chair, Mickey Kantor,  (photo) proposes concentrating more power in those hands. For Kantor, the cure for arsenic poisoning is more arsenic.

Kantor thinks that the mayor and the city council lack transparency.  Gee whiz, where could he have gotten that idea?  Could it be over $2 Billion is mis-spent tax dollars in the last 15 years?

How does Kantor plan to bring Transparency to Los Angeles City Hall?

Answer:  Garcetti and the council will appoint the members of — now don’t laugh – an Office of Transparency and Accountability [OTA].  OK, now you can laugh.  What an incompetent solution to the behind the scenes skullduggery at City Hall; the mayor and council will tattle on themselves.

Kantor’s report does provide us one new thing – another definition of chutzpah.  Formerly, chutzpah was when a kid who had killed his parents asked for leniency because he was an orphan.

After proclaiming the need for Transparency, Kantor fails to disclose his huge financial interest in one of the report’s most significant recommendations, i.e. the merger of the Los Angeles and Long Beach Ports.   We are indebted to Gene Maddaus at LA Weekly for alerting us to this hypocrisy.

“But the commission's hands aren't clean here, either. In "A Time for Truth," the commission complained that it had taken eight years to win approval of the $500 million BNSF project at the Port of L.A. Mickey Kantor, the commission's co-chair, represented BNSF in its efforts to build the project. That means he's not impartial on port-related matters.”  Gene Maddaus, 4-9-2014 LA Weekly

That’s right Kantor represents BNSF Railroad. It takes a hypocrite of classic proportions not to mention that his main economic recommendation benefits his own client, the second largest freight railroad network in North America.

Kantor nominates Regional Cooperation as his next “Must Have Solution.”  Did Kantor cooperate with Long Beach prior to making the port merge a keystone of his report?  Of course not.  April 11, 2014 LA TIMES, A Merger with Port of LA.? No Way, Long Beach Officials Say, by Ricardo Lopez.

Yes, A Time for Action is incompetence wrapped in hypocrisy and based on gullibility.  The winners are the mega-downtown law firms who wrote this fiasco.  The Go-To Solution is more power concentrated at the top and slam the door in the faces of anyone who does agree with your 100%.   It goes without saying, Mayer Brown, Latham & Watkins and their brethren will use their political clout to control those in whom they vest so much power so that the lawyers will run everything. Everyone else might as well go home.

Contrary to what most people believe, the mega-law firms are endangered and one way to save themselves is to take over municipal governments so as to create a greater revenue stream of tax payer dollars to their clients.

One Way to Break the Control of the Mega Law Firms:

Presently, 99% of all council votes are unanimous.  That unanimity results from the voting agreement whereby each councilmember must support whatever any other councilmember wants for his/he district.  This voting arrangement makes each council member the dictator of his own fiefdom.

Since Penal Code, § 86 makes this voting agreement illegal, passing another law against it will remedy nothing, but changing the structure of the City Council will fix the problem.

The City should have 12 council districts with 3 at large councilmembers per district.  That would make a 36 member city council which is well within the norm for a major city.

The top three vote-getters in each district become the 3 councilmembers for that district.  Let me emphasize; all three are “at large.”  That way, the residents are not stuck with one councilmember who has sold out to the special interests (e.g. Kantor’s clients).

This change destroys unanimity in voting.  Councilmembers #2 and #3 don’t gain anything by kowtowing to the special interest to whom councilmember #1 has sold out.  Thus, the other two councilmembers have to please other residents in their area.

When power within each council district is divided between 3 councilmembers, there will be plenty of “No” council votes.  If a developer buys one councilman, that district can still provide two No votes on any project which will allow the 33 other councilmembers the freedom to vote Yes or No.

Kantor has it dead backwards when he shoves more power to the top where the public is closed out of the process.  Rather we need a system where no single councilmember has an exclusive voice for an exclusive geographic territory.

In the January 2014, these same mega-law firms wrote their first report, A Time for Truth, declaring, “Los Angeles suffers from a crisis in leadership and direction. The old adage, ‘The same level of thought which created the problem, is not likely to solve it,’ can be applied to the City.”

Today, these downtown law firms, the bulwark of the old leadership, call upon us to intensify our past errors and concentrate more power in their hands, and also, we must be sure to convey railroad boxcars full of tax dollars to Kantor’s clients.

We should counter Kantor’s proposal with a new City Council structure which deprives councilmembers of their fiefdoms and forces them to compete against each other.

(Richard Lee Abrams is a Hollywood activist and an attorney. He can be reached at: Rickleeabrams@Gmail.com )