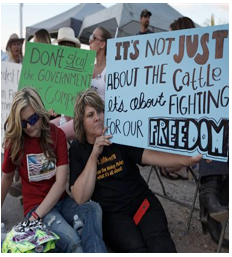 VOICES-I've been happy to see that the rural landgrab debacle otherwise known as the "Bundy Ranch vs. the FBLM" has grabbed public attention.  The absurd excuse of saving some turtle (fyi: facts have shown that the grazing is not even remotely a danger to the turtles) is contemptuously flung at the public as one more lame excuse for the government...more specifically the federal government...to abuse the public, and...more specifically....to steal our "stuff".

"health and safety" or "the environment" have not merely been ignored, but championed by the majority of the "good" people of LA ?

Several years ago I made futile attempts to alert fellow Angelenos to the rampant land grabs orchestrated by the Los Angeles Housing Department, who used fraudulently stated "code violations" to shake down  little old ladies for their duplexes or triplexes.  Developers were  salivating over their land and had their favorite  council-whore championing and manipulating the theft.

I also tried to alert others about the landgrabs orchestrated by the Community Redevelopment Agency,  the same agency that Governor Brown finally dismantled  in 2012.  It was the CRA, then-mayor Villarraigosa and then Councilperson Eric Garcetti who  were pulling the strings for their developer-crooks … Legacy Partners who wanted the corner of Hollywood and Vine....and got it.

The "affordable housing" generously donated by the developers cost approximately $1.4 million per unit to build...but what's a few mil among friends when we can help out so many "poor people"?

How wrong I was!  I was insulted, ridiculed, insinuated as being mentally ill and brushed aside by those whose monumental egos prohibited their consideration of anything that THEY had not yet heard about.  What was the missing link that such notables as ex-Daily News editor Ron Kaye and others hadn't heard about?  Agenda 21: the global plan to eliminate private property for us "commoners".  In short, a "global to local" plan to impoverish and enslave us.

For those unfamiliar with the Bundy case, it is a situation of the federal govt....specifically the "Federal Bureau of Land Management"...shaking down local Nevada ranchers by claiming the ranchers' cattle were trespassing on federal land for the past 100 years and now the feds want their past due rent (grazing fees), obviously a ruse for yet another property shakedown.

Breaking news is that the BLM has backed down when confronted by  goo-gobs  of patriot groups supporting the Bundy family and forcing mainstream media to report on such an unflattering yet accurate view of the throngs of gang-banging thugs that the federal government has become.

But the  coup d'etat  is that Nevada Senator Harry Reid was behind this sleaze-fest along with his Communist Chinese buddies!  Reid wanted to steal the grazing land for Reid's  son along with his Chinese co-conspirators for a SOLAR FARM!

I  no longer live in Los Angeles. I am now free to  speak and write the truth without ridicule, insults and ignoramuses "diagnosing" me as paranoid because I disbelieve everything from the media and government unless I check it from all sides.

But don't take my word for all of this.  It's all over the internet and  even probably the mainstream media now that it's  too big to hide.  How sweet it is!

(Carol Knapp is a former Angelino. She now lives in Costa Rica. Views express are those of Ms Knapp.)