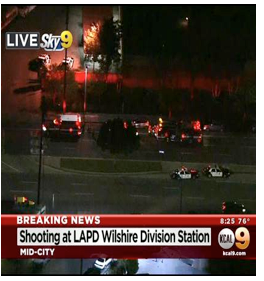 FIRST PERSON-Last Monday evening, the meeting of the Olympic Park Neighborhood Council was interrupted when a gunman entered the building that houses LAPD’s West Traffic Division and opened fire on the officers in the lobby. I was at that meeting because I agreed to serve as the neutral third party overseeing the council’s upcoming selection process and the agenda was mostly about election matters.

About an hour into the meeting, very loud and continuous gunfire broke out just beyond the door of the community room where the meeting was being held. I was looking toward the front of the room where the board members were sitting and turned toward the door just in time to see paint and drywall debris fly as a slug penetrated the wall.

At that point, everyone in the room hit the ground. To their credit, nobody in that room panicked. Everybody got as close to the floor as possible and stayed there. What goes through your mind at a moment like this? Lying there, I thought, “If someone comes through that door with a gun and starts shooting, we’re all in a lot of trouble.”

When the door did open, it was a policeman, gun drawn, asking if anyone was hurt. No one was, at least not in a physical sense. I suspect all of us will carry an emotional scar for a long time. For we who were there, those few minutes of shock was followed by a long night of waiting to be interviewed by investigators.

Despite what happened, the Olympic Park Neighborhood Council board managed to vote on its motions amidst the chaos following the shooting. Democracy rolls on regardless of the circumstances. The Los Angeles Police Department is to be commended, too, for its professionalism in dealing with the gaggle of civilians who found themselves caught in the middle of this situation.

Since the events of that night, we have learned a lot about the alleged perpetrator. His name, age, employment history, and failed bid to join LAPD. Most chilling of all was the AK-47 in his car. If he had used that weapon or chosen to pull open the first door he saw and begin with us, this story might have had a very different ending.

We, in that room, on that night, were fortunate or lucky or whatever you want to call it not to have become part of the grim rollcall of those who were in the wrong place at the wrong time. Schools, movie theaters, parks have all become killing grounds.

I have no suggestions about what can be done to prevent this from happening again. We live in a country where crazy people can get guns and do crazy things with them. According to a lot of politicians, the right of the insane to walk around with a loaded firearm apparently supersedes my right to not be the random victim of a mass murder. In the 21st century, this is the new price of freedom in America.

(Doug Epperhart is publisher, a longtime neighborhood council activist and former Board of Neighborhood Commissioners commissioner. He is an occasional contributor to CityWatch and can be reached at: [email protected])