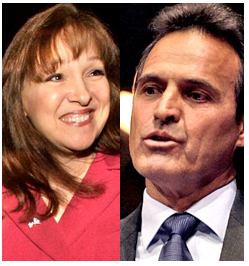 RUSS REPORT-On March 6 an “anonymous” email, made to appear as if it originated from Republican Candidate Mark Reed, was sent to several hundred members of the Republican Party in Los Angeles County (RPLAC) making it an illegal communication as defined under 18 U.S. Code §1037. The email was strategically sent to sabotage any chance Reed may have had for an RPLAC Central Committee endorsement on March 9 giving an “unknown” named Pablo Kleinman, Reed’s Republican opponent, a potentially better chance to benefit from an endorsement in District 30.

While it was not enough to get Kleinman the endorsement, it was enough to block Reed. Because of this, no endorsement came for any candidate in this important race.

The fallout from this poison email has stretched beyond the Reed/Kleinman contest for Congress in the 30th district.

Susan Shelley, a candidate for California Assembly in District 45, is now smack in the middle of a smear campaign as dozens of other members of the LA GOP who support Reed now suspect Shelley of some affiliation in this destructive deed.

Shelley is a “recovering” Democrat who changed parties in late 2009 and decided to run as a Republican candidate for Congress in 2012.

In March 2012, Shelley posted a conglomeration of court docket records about her opponent, Mark Reed, (30-CD) to her blog, along with her own insidious interpretation of those records. Shelley’s rhetoric was the result of animus against Reed because she claimed he was lying about her.

In her own words, Shelley’s email of April 12, 2012 said, “'I have released these public records because Mark Reed has been lying about me since the day I entered the 30th congressional district race. I have ignored this and gone about the business of campaigning, but Mark Reed continues to tell these lies about me, and I have finally had enough. If he is going to lie about me, I am going to tell the truth about him.”

Shelley’s angst was fuelled by the fact that the Jewish Journal did not include her in a Feb 21, 2012 candidate forum because they claimed she didn’t have a “shot at winning.”

My own independent investigation of Reed in 2012 determined that he is not a convicted felon, as Shelley’s site continues to claim, but that he does have one low misdemeanor conviction on a weapon permit charge.

Reed is a volunteer/employee of Los Angeles Police Department (LAPD) and had to pass Dept. of Justice, Federal Bureau of Investigation and LAPD background checks. As a purported “felon,” Reed could never have passed any background checks.

Shelley’s Assembly District encompasses much of CD-30 in which Reed and Kleinman, another “recovering” Democrat, are both running to replace incumbent Democrat Brad Sherman in the U.S. House of Representatives.

Shelley certainly still has loyal supporters within the Los Angeles GOP, particularly Gary Aminoff, whom many consider to be the godfather of Republican Party politics in Los Angeles County. It is public knowledge that Aminoff also harbors hostility towards Reed that continues to this day.

Aminoff was Shelley’s Senior Campaign Advisor in 2012 and is also involved with her current campaign even though he, along with the rest of the LAGOP, voted to endorse Mark Reed over Shelley in 2012.

Is it a coincidence that Aminoff also shows up in Kleinman’s current campaign as Senior Advisor?  Aminoff certainly stands to benefit greatly from the “poison email” if “concerned members of RPLAC” diminish Reed’s popularity and move some members into his candidate’s camp.

Curiously, the anonymous email took pains to exonerate Kleinman, in an effort to reassure readers that he was not a part to this vicious attack.

“First of all we want to make clear that we have nothing to do with Mark Reed’s Republican opponent for the race.  He doesn’t have any idea that we are sending this information to you, and is not involved with us in any way,” the email said.

Aminoff’s support of both Shelley and Kleinman in 2014 makes one wonder about “privilege” within the ranks of RPLAC. Aminoff “played” Shelley against Reed in 2012 while RPLAC remained silent on this and Shelley’s deceptive rant in 2012 and continues to remain silent over yet another fraudulent event dumped out via email to hundreds of unsuspecting members of RPLAC.

Parroting Shelley’s dubious opinions, the anonymous email said, “He (Reed) has been arrested a total of six times.  He was arrested twice on narcotics charges (including felony possession of a controlled substance, and soliciting another person to commit a drug offense), twice for driving with a suspended or revoked drivers license, once for possession of a prohibited endangered species, and once for two counts of having a concealed dangerous weapon.”

The email named its author as “members of RPLAC who are concerned about the reputation of RPLAC, and what the effect on that reputation would be if RPLAC endorsed a convicted felon” but justify their own illegal behavior under the guise of “concern.”

Shelley would have been wise to remove the post from her blog after she lost the election in 2012. Because she chose to leave it posted, she opened herself to scrutiny that may affect her 2014 race.

Mark Vafiades, Chairman of RPLAC, was also conspicuously silent in denouncing the fraudulent and defamatory email towards a fellow Republican at the March 8th endorsement meeting. Reed, who has received unanimous support in his own District and whose integrity and character are far less questionable than those who authored such a deceptive email, is pursuing legal alternatives that could leave Board Members of RPLAC vulnerable.

Chairman Vafiades’ silence raises the question of whether he condones, or is even complicit with, illegal conduct that occurs under his watch. Vafiades did not return calls for comment.

Aminoff is also under recent scrutiny about the addresses where he had been registered to vote and whether he actually lived in his district when he ran for office in that AD50. Aminoff changed his voter registration in December, 2013, resulting in his automatic resignation from the Central Committee and making him ineligible to serve on any County strategic committees, yet under Vafiades he still chairs two important committees, the Communications & Technology Committee and the Rules/Bylaws Committee.

Isn’t the current controversy surrounding Aminoff the same issue that has recently gotten Democrats into legal trouble, Rod Wright among them? While Vafiades posted press releases on the RPLAC web site condemning Wright and others for lying about the district where they resided, he appears to condone the same conduct in his own Party Committee.

Documents obtained from the Registrar of the County of Los Angeles appear to lend credence to Aminoff’s questionable addresses. California Election Code 7412-7414 and RPLAC’s own Bylaws support his ineligibility to serve on the committees he now serves.  Still, Vafiades remains silent on this and has never requested proof from Aminoff of his residency. Vafiades appears to have violated his own party’s bylaws along with the CA Elections Code, by continuing to allow Aminoff to serve on those committees.

Meanwhile an investigation is still underway to expose the identities of these “anonymous RPLAC members”.

MailChimp, an online marketing source, was used for the email blast, and a link in the email points directly to Shelley’s blog site. MailChimp has informed me that it has suspended the “anonymous” user and reported the fraudulent activity to federal authorities.

“Politics” is nasty business. Mudslinging is a mainstay and no candidate is immune to attacks from either side. But “slinging mud” and breaking the law to sling the mud are two vastly different things.

Dozens of articles, both local and national, repeatedly point to fractures within the Republican Party that weaken the party and its viability.

For most voters, perception is reality.

From an outside point of view, the anonymous email not only served to deepen fractures in the local Republican party but it served to give Democrats a distinct advantage by providing fodder for them to use against candidates in the primary and general elections.

The anonymous “Concerned Members of RPLAC” have done exactly what they railed against in their poison email.  They have sullied the RPLAC name and all Republicans should be outraged by this criminal act.

Chairman Vafiades silence on these incidents is deafening and further weakens the standing of the LA County GOP in the eyes of Republican voters.

As the Chairman, Vafiades needs to get his house in order and make sure his organization abides by all laws. Illegal acts by anonymous members of RPLAC should have been publicly denounced and every effort to prosecute offenders should have been made. A real leader would have done that, unless of course, there is something to hide.

(Katharine Russ is an investigative reporter and freelance columnist. She is a regular contributor to CityWatch and works with the United States Justice Foundation in defense of Veterans. Ms Russ’ opinions are her own. Katharine Russ can be reached at: Katharine.russ@charter.net)