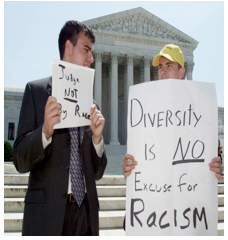 ALPERN AT LARGE-Ours is an open-minded society, so open-minded that it's closed to hearing more than one point of view--because on all the difficult issues we know there's really one "right" and simple answer...and, in a similar vein, we're so racially open-minded that we're "race-conscious".

Tolerance, inclusiveness, and political correctness is the way it's done in our post-racial and post-ethnic society.  In fact, our one-party state doesn't need to be watched because the "right" party runs it...the "correct" and "just" party is perfectly capable of policing itself.

That the other party has pretty much fled the state, taking their wealth with them to other states, probably means that the "right" people won out and the "wrong" people admitted defeat and slinkered out with their tails between their legs.  They were on the wrong side of history--and just plain WRONG--and they deserve exile from the Golden State...

...because those that remain are led by leaders who are cleaner in their governance and industry, and more responsible than ever, leaving our Golden State with a fiscally-responsible, job-abundant, opportunity-rich and cohesive society that is the Nirvana its open-minded, liberal leaders always envisioned.

The budget is balanced, and we're able to do it with lower taxes that are spent transparently and in a first-rate manner!

The pension crisis is resolved, and the faith of the voters has been restored in its state civil service!

Special interests have finally been kept in check, and the need to balance our budget and strengthen our infrastructure has been addressed, leaving us lots of time to finally address our environment and create a sustainable population growth to create a non-congested and open-space-rich California!

And any racism in open-minded California?  Forget it...non-existent!

After all, we now have Leland Yee to remind us that--as with Ron Calderon, Roderick Wright and Bob Filner--elected leaders of ALL ethnic backgrounds in our one-party state can enjoy legal troubles that place them in the very same, increasingly-diverse jail...

...so let's keep our one-party state, because it can truly police itself.

Furthermore, when one group of open-minded, post-racial members of one ethnic group try to bring back that fair-minded, even-handed policy called Affirmative Action, it's shocking to know that those claiming discrimination by this policy (Asians) could stop it.

And the minority party that never liked affirmative action, and always hated it the most because they claimed it was divisive and punished achievers?  Racists, every one of them...so Asians do well to continue to embrace the one party that truly represents their interests, and so therefore Asians need to reconsider right?

After all, as African-American communities have learned, embracing one party has truly created a path for economic prosperity and greater recognition--that other, wrong-headed party that claims to want to get past race classification are probably just...racist...and therefore it's smart to not listen to their hateful arguments.

To summarize, we live in a happy, just prosperous and industrious state.  A state of unity, a state where hard work and education pays off, and there are no "winners and losers".  Where races coexist in an environment that is healthy and unified, and which is the envy of the nation and  of the world.

Just ask the leaders and those reporting the news--they'll set you straight if you don't believe this to be true.

Because you're probably racist.  The problem is YOU.

(Ken Alpern is a Westside Village Zone Director and Boardmember of the Mar Vista Community Council (MVCC), previously co-chaired its Planning and Outreach Committees, and currently is Co-Chair of its MVCC Transportation/Infrastructure Committee.  He is co-chair of the CD11 Transportation Advisory Committee and chairs the nonprofit Transit Coalition, and can be reached at [email protected].   He also does regular commentary on the Mark Isler Radio Show on AM 870, co-chairs the grassroots Friends of the Green Line at www.fogl.us .  The views expressed in this article are solely those of Mr. Alpern.)