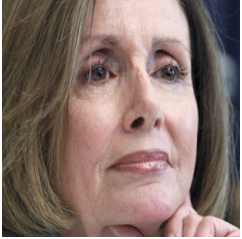 POLITICS-Long beloved by i-bankers and buyout gurus, the concept of "leverage" is just breaking into the lexicon of political strategy. That's about to change. Or rather it could change, if Nancy Pelosi and a few rich donors seize the best investment opportunity in the political marketplace before it's too late.

More women than men vote especially if they have a good reason to do so -- like two-thirds of minimum wage  workers are women and a higher minimum wage would decrease the gender pay gap by 5 percent.

In short, if voters around the country are focused on the minimum wage when they cast their ballots in November, chances are Harry Reid will remain in control of the Senate. Democrats may even pick up a few seats in the House. But if anything else is top of mind, will-be Majority Leader Mitch McConnell can start picking out drapes.

Given these dynamics, rather than going through the standard election year calculus of deciding which candidates to back and with how much money, this year, Democrats should focus primarily on making sure raising the minimum wage dominates the psyche of the American voter.

Enter California stage left. California is our largest state and a national trend-setter. Thirty-eight million people -- 1 out of 8 Americans -- live in California.

If California was a country, it would have the 9th largest economy in the world. Successful campaigns in California can blanket the rest of the country with the media coverage they generate. In California, Democrats have exactly the kind of high leverage political play they need to prove Nate Silver wrong, but they have to move fast.

Back in late November, Ron Unz, a maverick conservative libertarian launched a California ballot initiative campaign to raise the state's minimum wage to $12 per hour, the highest in the country.

With the Golden State's cost-of-living running at 30 percent above the national average, that's not an unreasonable figure, and the effort has already attracted significant favorable coverage in the state and national media.

Local polls show that it would win by a landslide. But as of right now, the California initiative lacks the funding it needs to get the signatures it needs to qualify for the ballot. And its backer is losing heart, "I've been totally astonished at the reluctance of wealthy Democrats to fund a minimum wage initiative so beneficial to their political chances in November and so close to their deepest ideological beliefs," Unz told me yesterday, "I guess I'll just never understand how Democrats think."

Me neither, Ron -- but leaving that aside for a moment, the more important point is this: the window to invest in the political equivalent of Google is still open, but it won't be for long. The ballot initiative needs money and it needs it fast.

Unz told me yesterday, "If a million came in by the end of the month with good prospects for the remainder, the initiative could still be put on the November ballot for $3 million or less. But the costs keep rising until the petitioning begins." That's where Minority Leader Pelosi comes in.

Pelosi -- and maybe only Pelosi -- can close the funding for this critical investment. In addition to being the highest-ranking female political leader in U.S. history; Pelosi is also one of the best fund raisers in the country.

Better yet, her San Francisco district puts her smack in the middle of a Silicon Valley culture that understands thinking big and moving fast. The kind of money needed for the ballot initiative can't be raised in $50-100K checks. There isn't enough time.

Instead a few savvy political investors -- ones who are smart enough to recognize the unique leverage of this specific initiative and gutsy enough to be decisive -- need to pull out their seven figure checkbooks.

Pelosi knows those donors, and a phone call from her would get their attention. Such a move would blind-side national Republican strategists who are convinced Democrats are too unorganized to be so cunning, so strategic.

Overnight, raising the minimum becomes the top election issue in media-rich California, which in turn propels the issue to the top of the national political stage. Americans in every competitive congressional district in the country will start asking why in a time of record corporate earnings is the minimum wage lower than it was in the 1950s. And Nate Silver's "slightly favored" Republicans start running scared.

A sudden political strike by one of America's top political leaders -- and a woman to boot -- would seal Pelosi's legacy as a progressive powerhouse and catch Republicans flat-footed going into the November elections.

An initiative that originated with a Republican will succeed because of a Democrat. Voters who can't stand either party will see one of the most powerful Democrats in the country embracing bipartisanship while DC Republicans remain in thrall to low-wage business lobbyists.

With the media reporting overwhelming popular support for a $12 minimum wage in California, the $10.10 minimum wage legislation backed by President Obama and Democrats in Congress becomes a moderate proposal. Republican opposition begins to seem completely unreasonable.

And with a Republican making the case for a big minimum wage hike right next to a powerful Democrat, even more prominent conservatives will come on board as Bill O'Reilly and Phyllis Schlafly already have.

John Boehner and his GOP allies will try to claim that Democrats backing of a minimum wage hike is a cynical political ploy to win votes, but the left-right partnership on the highest profile minimum wage campaign in the country will blow that argument to bits.

The California ballot initiative is highly likely to pass. So regardless of which political party wins the 2014 election, the progressive economic agenda will have won a critical victory at the polls. Post-election headlines will hail the fall of the first domino, shoring up the progressive post-game analysis.

Pelosi will rightfully take credit for that victory and for the surge of progressive spirit that will follow this critical win. All of that sets the stage for a progressive economic agenda to drive the 2016 political discussion. Democrats will think twice before tacking to the middle by selling out regular Americans to score points with corporate lobbyists. Republicans just may see the error of their ways and pass a $10.10 federal minimum wage in 2015 just to put the whole thing behind them before the next election.

Democrats have done their best to lay the groundwork for this in other states, placing minimum wage hikes on the ballot in Arkansas, Alaska, South Dakota, and elsewhere. But those are small states and won't help keep the issue at the top of the media agenda on Election Day.

A high profile campaign in the most populous state in the country will do just that. If you don't believe me, believe history. In 1978 California's Proposition 13 won a landslide victory at the polls.

That initiative slashed property taxes and sparked a national tax revolt. Two years later Ronald Reagan was in the White House and the Republicans had gained control of the U.S. Senate.

The California ballot initiative has the potential to fundamentally re-shape the national political narrative, generate hundreds of millions of dollars of earned media for a progressive economic agenda, and profoundly change the dynamics of the 2014 election.

If successful, it will also raise the incomes of low-wage California workers by over $10 billion a year, lifting millions of families out of poverty, all for $3 million. Now that's leverage.