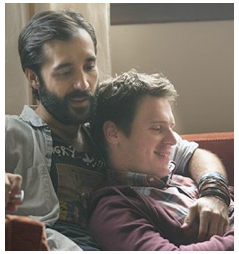 TELEVISION-HBO is known for premium content, and its all-gay show “Looking” was successful enough that it has been renewed for a second season. I’m still not sure what, if anything, happened in the first one.

It’s a dud. And yet I watched every episode, long after my boyfriend declared “this is dumb” and walked out of the room. I’m just that hungry for gays on parade, and I hoped the show would pick up steam. My copy editor Sheri, it turns out, is a fan, and suggests that perhaps gay men aren’t the ideal audience.

As a gay man, I’ve seen a lot of abjectly horrible content created with me in mind. Check out Netflix’s gay and lesbian queue for a long list of garbage that I, and others like me, have choked down out of desperation for representation on screen. There are many well-known exceptions to this rule.

Breakout hits such as “Billy Elliot,” critically acclaimed films like “The Kids Are All Right” and foreign imports like “Priscilla, Queen of the Desert” buck the trend of insufferable soft-porn coming-out sagas, of which there are a dozen for every one of the prior.

On the television side, things have been even worse. Yes, we now have prominent gay characters on network television, including the very funny duo from “Modern Family,” but those tokens tend to appear in shows that are not specifically about or for gay people. That sort of thing, where LGBT personalities are the stars from top to bottom (no pun intended), can now be found in cable ghettoes like Logo, where “RuPaul’s Drag Race” has earned a loyal following. Those shows tend to be cheap and, when they succeed, the audience is limited.

Nothing so far has risen to the masterpiece level of entertainment found in the original, British “Queer as Folk,” a miniseries from 1999 that launched the careers of straight heartthrob Charlie Hunnam and Aidan Gillen, who more recently delights fans as Littlefinger on HBO’s “Game of Thrones.” “Queer as Folk” launched an American clone on Showtime, which ran for five disappointing seasons. The same network also aired “The L Word,” for which it deserves credit.

Of course there is the stealth gay network that is Bravo, which airs endless reality shows about fashion, hair and catfights. It’s the “Men’s Fitness” of television, a space where one can feel safe dipping his or her toe in the messy stereotypes of gay culture without getting caught enjoying the real thing.

This brief history of gayness on television is by way of introducing “Looking” in the proper context. The 8-part series, which recently concluded, started as the most promising foray into gay storytelling in years, and the first truly gay show to appear on HBO, a network overflowing for decades with popular, quality programming.

Hope is a powerful thing, and I just couldn’t believe that HBO, finally taking on the task of an all-gay storyline, where all but the extras and a couple of throwaway characters are gay, was capable of falling so utterly flat.

It’s a cliché, but it’s true: Gay people are interesting. We are an oppressed minority caught at the center of a titanic cultural shift. Our family lives, personal lives, sex lives and even work lives can be loud and complicated or sometimes more tortured. There is, in other words, a lot to work with.

Instead, “Looking” is more like a lame brochure for San Francisco, in which three fairly generic and mostly white male friends deal with fairly generic and mostly white male problems, i.e., I don’t love my job, I don’t know if I love my boyfriend, and I get nervous on dates. San Francisco is arguably America’s most beautiful city, but as a backdrop for the mundane and commonplace pseudo-struggles of a trio of boring gay men (lesbians are but a rumor, here), it does little to make up for the lack of character or plot.

Where there is drama, it feels forced. Patrick, our leading man, struggles to throw himself at one hypersensitive man after another. Eventually he lands in the lap of the world’s touchiest Chicano, who spends most of the season finding offense in everything. The show’s most baffling attempt at conflict arises when Agustín, Patrick’s best friend, is forced to confess to his boyfriend that the famous prostitute they had sex with was paid—paid!

The title of the show screams “voyeurism,” and indeed it follows a verite, fly on the wall style that does great damage to its fleeting sense of humor. It is too intimate to be funny. You cannot step back from the awkwardness and laugh. “Girls,” also on HBO, manages to balance TMI and humor by pulling the camera away and reminding you, frequently, that these characters are someone else’s friends. They’re not in your living room, they’re in Brooklyn, and they can’t hurt you or leave stains on your couch. “Looking,” on the other hand, forces you into the sweaty center of its story lines and the authentic style transforms humorous setups into uncomfortable, yet dull experiences.

To be fair, things become more interesting following the first episode, which is only slightly less boring than waiting in line to use the bathroom at a government building. Patrick, played by Jonathan Groff, is adorable, and his charisma does as much as possible to carry the show.

As a child of the 80s, I laughed out loud when Scott Bakula made a bathhouse entrance onto the show, but he actually fits in with the cast, and both cast and crew deserve credit for making everything feel so real, despite my misgivings. Ultimately it’s too real, too common, and we are left with some pretty obvious plot twists, nice photography, decent music and four hours that probably would have been better spent living, rather than looking.

If the goal is to study the fairly normal lives of fairly normal gay men, then mission accomplished, but—and this is especially true if the audience is intended to be other gay men—it should also aspire to entertain.

The first season of “Looking,” mercifully short, succeeds in showing gay people to be looked at. That’s about as low as my bar goes, and I watched it. Now I know I need more than representation on screen.

I’m glad it has been renewed, if only to allow its creators to follow up with something more heightened. Frankly, my own life is more exciting than what I’ve seen of “Looking,” and I’m among the least interesting gay people I know.