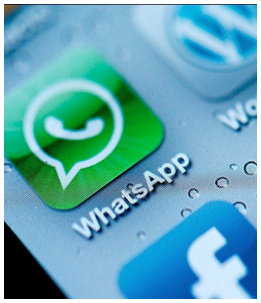 THE MAIN STREET OFF RAMP-To some, the $19 billion paid by Facebook for the Silicon Valley start-up What's App represents the ultimate confirmation of the capitalist dream. After all, these riches are going first and foremost to plucky engineers whose goals are simply to make life better for the public. Got a problem with that?

Yes, actually. Sure, people should be rewarded, even lavishly, for their innovations. But $19 billion for 50-something people in a company with no profits and no prospects of having any, at least in the short term? Is this app worth more than Southwest Airlines, or Sony, or scores of other companies with thousands of employees and decades' worth of profits? Put another way, the $19 billion makes Vladimir Putin's now-defunct bailout of Ukraine seem puny. Ukraine, the homeland of What's App's CEO, if you don't remember, is a country of 46 million people.

Yet, this is the form of capitalism that we now have, one tilted so heavily to the few well-connected souls, whether on Wall Street or among the chummy “directors club” keiretsu of Silicon Valley. But the heart and soul of free enterprise – small and medium-size companies – remain in the doldrums. They are producing jobs at rates lower than those before the most-recent recession. According to the Bureau of Labor Statistics, firms with less than 50 employees are adding jobs at rates well below 2007 levels. Drivers of the recovery early in the prior decade, they have become laggards as larger firms have expanded modestly.

Indeed, by 2013, smaller firms, those with less than 100 employees, added far fewer jobs than in the decade before. In previous recoveries, small firms led the way, but in the post-2007 recovery, these grass-roots companies continued to lose ground. In 1977, Small Business Administration figures show, Americans started 563,325 businesses with employees. In 2009, they started barely 400,000.

This is not just a story of clueless mom-and-pops left behind by progress. Business start-ups, long a key source of new jobs – as a portion of all businesses – have declined from 50 percent in the early 1980s to 35 percent in 2010.

Many people who once had decent incomes and may have owned, or hoped to start, a business have slipped to the economic lower rungs. Their decline is not widely mourned in the academic, financial or media worlds. Last year, one Financial Times columnist contended that the middle class, “after a good run” of some two centuries, now faces “relative decline” and even extinction. Not that this trend disturbed the author, who noted that “classes come and classes go” and that, when the middle orders disappear, about the only ones sorry to see them go might be the “middle classes themselves. Boo hoo.”

Like the yeoman farmer, the artisan and the shopkeeper during the 19th century's Gilded Age or in Victorian England, millions of smaller business entrepreneurs are threatened with what I call “proleterianization,” that is, a descent from the relatively secure, property-owning class to the permanently insecure masses, living paycheck to paycheck. This process is driven largely by powerful economic forces, such as technological change and globalization, but has been exacerbated by the actions of the political class.

Much of the blame starts with Federal Reserve policy, which has been totally designed to favor high-risk investments – like What's App – at the expense of the more modest savers along Main Street. The winners in the era of low interest rates and the Fed's bond-buying binge have been venture capital firms, hedge funds and Wall Street investment banks. Capital has not been flowing to consumers, or smaller firms, noted one top former manager. The Fed has lost “any remaining ability to think independently from Wall Street,” asserts Andrew Huszar, who managed the Federal Reserve's $1.25 trillion agency mortgage-backed security purchase program.

Fed policy, through TARP, bailed out the big banks, which generally are loath to loan money to small businesses, but has done little for smaller banks, who generally do make such loans, and which have continued to contract. The rapid decline of community banks, for example, down by half since 1990, has hit small-business people most directly, as those institutions have been a traditional source of small-business loans.

All these problems have been made worse by a tide of new regulations, notably the Affordable Care Act, which, like most top-down systems, most hurts the middle class. When Obamacare took effect in 2013, it was the small-business owners and the self-employed who suffered the brunt of health insurance cancellations and higher premiums. In addition, the ever-growing net of regulations, covering everything from labor to the environment, has placed a far greater burden on smaller firms than their larger counterparts.

A 2010 SBA report found that federal regulations cost firms with less than 20 employees more than $10,000 a year per employee, while bigger firms paid roughly $7,500 per employee. The biggest hit to small business is environmental regulations, which cost small firms 364 more percent than large ones. Small companies spend an average $4,101 per employee on such regulations, compared with $1,294 at medium-size companies (20 to 499 employees) and $883 at the largest companies. This has come over a period when many of the key costs faced by the business-owning middle class – house prices, health insurance, utilities and college tuition – have all soared.

Given these conditions, it's not surprising that small-firm owners are about the most alienated large constituency in America, according to Gallup. Yet, their once-considerable clout has faded, particularly among Democrats, who have found new allies within Silicon Valley, much of Wall Street and, most of all, a growing, connected clerisy of government workers, academics, high-end professionals and much of the media.

Progressive theorists, such as Ruy Teixeira, have suggested that, in the evolving class structure, the rise of a mass “upper-middle class” consisting largely of professionals, tech workers, academics and high-end government bureaucrats, allows Democrats to win without the support of shopkeepers or even industrial workers.

Such people may turn to the GOP, or elements of the Tea Party, but neither of those groups really addresses their needs. Mainstream Republicans remain fundamentally loyal to those big-business and the money powers that still tolerate them. The Tea Party, sadly, now captive to the well-financed hard Right, has diverted its attention from crony capitalism to tired social issues like gay marriage and immigration. In doing so, the Tea Party has unwittingly alienated many small businesses, notably those owned by minorities, women and gays.

This political calculus is devastating to the interests of smaller firms. Main Street may remain the symbol of the American Dream, and it represents “the human face” of capitalism. It is roughly three times as popular as unions, big business, banks and, of course, the political class itself.

Yet, for all its popularity, Main Street increasingly is in danger of becoming an off-ramp from the American Dream. It may be celebrated in countless political speeches, but, for the most part, gets ignored in the legislative process, being unable to compete against better-organized, and better-funded, business, labor and issue-oriented lobbies.

Main Streeters, to preserve themselves and provide for their children, need to develop, for lack of a better word, a kind of class consciousness. They must understand that, in today's world, what's good for Facebook, Google or General Electric may not necessarily be good for them.

Indeed, policies that encourage shoving billions into the hands of the few – whether pinstriped Wall Street sharpies or hoodie-wearing techies – will not leave much on the table for those small-scale entrepreneurs now finding themselves increasingly on the fringe of American capitalism, looking in.