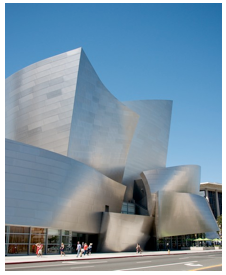 PERSPECTIVE-City watchers embraced the recent news that Frank Gehry has been rehired as designer of the Grand Avenue project. This is the $650 million stack of towers and plazas long-planned next to Disney Hall, also designed by Gehry.

Grand Avenue has been on the drawing board for nearly a decade. Like downtown itself, its fortunes have risen and fallen with the economy, and with planning decisions good and bad.

No one wants this key part of Downtown to remain barren parking lots. And Gehry's exuberant designs are sure to boost LA's reputation as the capital of creativity. So let's applaud the progress.

But let's also remember the problem that Grand Avenue was supposed to solve.

Presently, the Music Center and Disney Hall preside over dead streets. For a cultural complex, it sadly lacks the street activity such a landmark should enjoy. Instead, concert-goers drive into underground garages, escalator up to the theaters and scoot back to their cars to return home.

It's a one-stop destination that walls off patrons from surrounding neighborhoods. (The same selfishness, symptomatic of LA planning, afflicts The Getty Center and Dodger Stadium.) The root of the problem is the Bunker Hill area where it sits. In a fit of misguided 1960s urban renewal, the hill's Victorian homes were sheared off to make way for the Music Center. If even just a few of those homes were saved, the place might have retained an authentic vibe -- like the rest of Downtown has.

For while Grand Avenue plans gathered dust, other neighborhoods thrived. The old banks and theaters now teem with lofts and cafes. The residential market can't keep pace with demand. Hipster havens like Ace Hotel are reviving faded landmarks. Every week there's another cool, new restaurant. In 2013 alone, 64 retail establishments opened -- most by independent proprietors -- according to the Downtown Center Improvement District.

These neighborhoods grow organically from a porous street grid, with narrow alleys, wide sidewalks, multiple storefronts and pleasingly mis-matched facades. They do it without a starchitect.

As Downtown's tide has turned, Grand Avenue is not the only mega project to resurface. After 27 years in a coma, Metropolis -- the $1 billion plan near LA LIVE -- has been revived by China's Greenland Group and a Gensler design. Also near LA LIVE, developer Mack Urban will build a $750 million set of high rises. The Wilshire Grand's 73 floors will make it the tallest building on the West Coast. And more big deals are lining up.

The question is whether Gehry and the other mega projects can, starting from scratch, capture the magic Downtown is already generating. Will they selfishly corral pedestrians? Will they be bunkers and monoliths? Will L.A. commit the same old errors?

Rick Cole, Deputy Mayor for Budget and Innovation in Los Angeles Mayor Eric Garcetti's office, is one of those who hopes for results that draw on traditional design principles like the ones sparking revival of Downtown's old core. Without prejudging Gehry's new conceptual design, Cole is skeptical of designers known for splashy architecture and not for attending to mundane details like the real-life experience of the pedestrian.

"Getting streets right isn't rocket science, and it doesn't require 'creativity,'" says Cole, the former mayor of Pasadena, who helped revive street life in Old Pasadena. "In fact, most 'creative' solutions have fallen abysmally flat because they ignore time-tested principles of how people behave.

“With Photoshop, you can show a space full of people in an illustration. But in the real world, you can't fix dead wall space at the ground floor with decorative pavement and landscaping.

“'Door/window/door' is the science of engaging the pedestrian. We know how to do it in malls. We've forgotten how to do it on city streets. More grand plazas and gardens aren't the answer. Success comes from wide sidewalks and human-scale street activity."

(Jack Skelley is an urbanologist,  marketing expert and the owner of JSPR. He blogs at HuffingtonPost.com … where this column was first posted.)