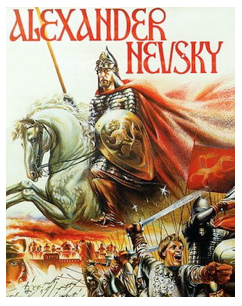 GELFAND’S WORLD-In 1984, physicist Freeman Dyson published a book titled Weapons and Hope. It was in the midst of the Cold War, and Dyson was writing about the hope that we might someday get out from underneath the risk of nuclear annihilation. It's interesting to remember his analysis of the Russian psyche and how this affected the calculus of war planning. Dyson described how the Russian soul had been forged out of centuries of invasions coming from all directions. The fear of invading barbarians, whether from Asia, France, or Germany, had informed Russian thought regarding its relationships with other powers. We westerners remember Napoleon and Hitler as invaders of Russia, but there were others who did enormous damage, including Mongols and Teutons. This concern with invasion and destruction is embedded in Russian culture, from its literature to its cinema.

In the fighting and aftermath of WWII, the Soviet army overran and occupied much of eastern Europe, and within a very few years, Russia had installed puppet regimes in a wide band of countries along its borders, thereby creating a wide buffer zone between itself and western Europe. the so-called satellite countries didn't always like this arrangement. People of a certain age will remember the Hungarian uprising of 1956 and the Czechoslovakian "Prague Spring" of 1968. Each was ultimately crushed by Soviet tanks and soldiers.

You have to look at a map of Europe in the postwar period to get a feel for the geopolitical situation. The Russians had created a buffer zone of newly minted communist countries that spread from the oceans of the north down almost as far as the Mediterranean. We in the west referred to this buffer zone as the Soviet Bloc countries and worried about its military alliance, the Warsaw Pact. Facing the Warsaw Pact countries was our own North Atlantic Treaty Organization countries, also referred to as Nato.

We can consider Dyson's analysis and combine it with our knowledge of how drastically things have changed for the Russians since the days when they had a barricade consisting of whole countries -- Poland, East Germany, Czechoslovakia, Romania, Hungary -- between themselves and western Europe. During that Cold War era, we worried about a Russian invasion of western Europe, but we need to concede that the Russians had their own history of western invasions to consider. Even after the death of Stalin in 1953, the Soviet Union, although a little less paranoid, continued to buttress its border defenses by controlling its nearby neighbors.

We of course interpreted Russian behavior as the attempt to spread their version of communism over the entire earth, which was a reasonable conclusion. But even while referring to the international communist conspiracy, our leaders gave the Russians credit for absorbing war dead totaling in excess of twenty million in their fight with the Nazis, and understood at some level the reasons behind Russian concerns.

By 1989, a mere five years after Dyson's book came out, things were changing radically. the Warsaw Pact countries began a rapid climb out of the Soviet sphere. The Polish movement called Solidarity forced elections and reform, and suddenly Poland was no longer under the Soviet thumb. Within a short time, the Berlin Wall had fallen, and Hungary too left Soviet control. The barrier between communist Russia and the west was becoming weaker.

Then came what had seemed to my generation to be a nearly impossible event. A mere seven years after Dyson's book came out, the Soviet Union declared itself to be no longer in existence. Between December 25 and December 26 of 1991, the Soviet leader resigned, declaring his office extinct, and the Soviet flag flying over the Kremlin was replaced by the Russian tricolor. Numerous regions that had been parts of the old Soviet Union declared themselves independent.

Suddenly the old Russia became the Russian Federation. One of the elements of the previously existent Soviet Union, the Ukraine, was now officially independent. The Ukraine did not ally itself with the west at that time, but the Russian motherland no longer had that vast bulwark of Warsaw Pact countries on its flank, and its immediate neighbor, the Ukraine, was no longer under Russia's direct control. And all of this had happened in the space of 3 years, essentially a microdot on the page of history.

There's one element of this story that jumps out at us when considered from today's perspective, but was barely noticed at the time it happened. For some reason, the Russian leadership of the 1950s transferred administration of the Crimea from the homeland to the Ukrainian part of the USSR. It obviously didn't matter much at the time, because both were parts of the wider Russian empire.

I have to take a moment here to credit a friend of mine who used to work for the U.S. Foreign Service, and who gave me the following background. The Ukraine had always been a part of some other government or leadership until recently. It's boundaries are arbitrary, cobbled together from parts that were previously Polish, Lithuanian, and Russian, and its population is, for the most part, a mixture of Ukrainian speakers and ethnic Russians. There are competing desires among that mixed population. Some want to link their economy and culture to western Europe. Others feel a strong connection to Russia and would like to keep the connection with them. The Crimea is one of those places that has a stronger connection to Russia than to the western European countries, because it is majority Russian and Russian speaking.

It's much more complicated than I've set down here, but this should suffice for an overview.

The geopolitical situation is stirred up by a couple of things. The first is obviously Putin himself, who seems to be something of a throwback to the old style of rule under the Soviet Union. The other is the movement among some Ukrainians to create closer ties to the west. Place this nationalist movement among the Ukrainians against Putin's personality and you have trouble. What's worse from the standpoint of Putin, the Nato alliance has signaled its willingness to bring the Ukraine into the western fold, either by allowing it full Nato membership or at least something close.

It's been a huge comedown for the Russian rulers. The Russia that had a wide buffer of satellite countries as recently as 1989 is suddenly faced with the prospect of having a Nato country on its own border. For someone like Putin, that can't seem comfortable.

Consider Russia's interest in the Crimea. It's not only an ethnically Russian territory, it's a warm water seaport. And due to a technicality in the breakup of the old USSR, it's now at risk.

Now consider the situation from our standpoint, but think of the year 1987 or 1988. Our military and diplomatic strategists were busy war gaming Soviet invasions of western Europe. The idea that Russian Bloc countries would reverse course and join NATO would have been considered a hallucination at the time. But in 2014, the following countries are now members of the Nato alliance: Albania, Bulgaria, the Czech Republic, Estonia, Hungary, Latvia, Lithuania, Poland, Romania, Slovakia, Slovenia, and Croatia. It's been turnabout on a grand scale.

If the Ukraine joins the west, that will take the old anti-Russian alliance right up to Putin's own borders.

In other words, we are playing a political game well beyond the borders we used to defend, and potentially carrying the game to our adversary's doorstep. The idea that we should get involved over the disposition of Crimea -- whether it stays with the Ukraine or regains its links to the Russian Federation -- ought to be fairly irrelevant to us. It's just not that important to our national interest. As my friend explained, we don't have a dog in that fight. The likely future of the Ukraine may involve an ethnic partition, much as Czechoslovakia divided itself peacefully into two nations, or it could involve fighting which would ultimately have the same result.

For us, we might think of it as playing with the house's money. We're not looking to build our own naval base in the Crimea, and we grow plenty of wheat for ourselves. The Ukraine is a big problem for Putin if he makes it so, or he can negotiate favorable terms. That may be what he is doing now in his own crude way.

We don't have a lot of options in terms of going back to the war footing we maintained from 1945 through the early 1990s, but we may be able to gain some concessions along the way.

One additional point that was also provided by my colleague. The historian Timothy Snyder wrote a piece for the New York Review that is available online. He followed it up with a blog post that explains some of the political maneuvering that has been going on. The extended analysis can be found in the post titled Fascism, Russia, and Ukraine

The followup piece discusses the Haze of Propaganda.

Snyder's take on the situation is that the Russians are the dictatorial side here, but they are claiming that the Ukrainian rebels are fascists and Nazis. Reading Snyder, one can almost think that the Russians have taken a page out of the Karl Rove playbook. You know, blame your opposition for everything that is worst about yourself.

So here is one possibility: The Crimea will rejoin with Russia and become part of the Russian Federation. This will satisfy its inhabitants and may be what Putin is trying to achieve. The most likely separation is along ethnic lines, and would be along the Dnieper River.

Here is another point that knowledgeable people are quietly whispering. What the Russians are doing and will likely do in Crimea is not unlike what the west did in creating an independent Kosovo out of Serbia. In the aftermath of the breakup of the Soviet Union and the eastern bloc nations, things got complicated, and national separations along ethnic and cultural lines were the most obvious and achievable.