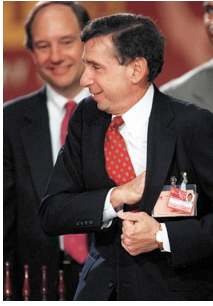 GUEST WORDS-I recently polled a number of people about an important question. The group included a couple of lawyers, community activists, a retired elected official, several business people, a retired newspaper publisher, and two philanthropy professionals. They'd all been thinking in one way or another about the LA2020 Commission's "A Time for Truth" report that paints a dismal picture of Los Angeles' problems and prospects.

Here's the question I asked that provoked a lively dialogue with each:

I think you'll appreciate the thought and care behind their following concerns.

● City of LA must deal with its pressing financial issues: the 4 million strong City of LA is the financial black hole sitting squarely in the middle of a surrounding County of LA – a “donut” poised for prosperity.

● City of LA pension problem is a malignancy and it’s got to be addressed first and foremost (Do we grow our way out? File for bankruptcy? Kick the fiscal can further down the road?)

● Surround the mayor with sufficient civic coalition protection so he can take on civil service and give excellent managers and administrators more freedom to make hiring judgments based on results rather than seniority.

Develop Relationship between Government and its Citizens and Social Sector

● Tackle the climate, water and energy future in ways concordant with, rather than in conflict with, climate change.

Move from “cool roofs” to “cool city” and reduce the region’s heat footprint to ameliorate the effects of climate change and its offshoot,

● Remake the streets (start with the City, expand to County) because they are core economic development assets and core homeowner and real estate property value assets for the region.

● Advocate for an economic competitiveness strategy backed by a wide civic coalition.

● Attract technology and biotech companies aggressively on the San Diego/Toronto models of state and civic-sanctioned connectivity between business and institutions of higher education.

● Elect all public officials with the expectation that “getting elected means placing regional prosperity highest on priority list.”

● Make the “civic culture” of the region visible throughout everything associated with LA n Synch (and other similarly strategically disruptive civic coalitions) so everyone understands how it works and stands on a common ground of understanding.

● Changing from a transactional civic culture (“I'll get mine, you get yours, whatever that produces, well, that's good enough”) to one of transformation. The latter requires a brand of advocacy and activism that shakes up and reshapes the fundamental relationship between people and place.

● Establish LA as the world’s “partner city” represented by unparalleled national and global relationships that place LA’s talent in the middle of conversations occurring on the future of industry, education, government and social welfare.

● Avoid “philanthro-centrism,” an overly precious belief that the priorities of a disconnected and widely dispersed philanthropic and nonprofit sector economy of under $40- billion – in the powerful context of a $750 billion economy and a $60 billion governmental economy – will drive the priorities of business and government.

● Reduce the failure rate in our schools and create skill sets that allow LA children to be competitive in a global economy, which is fundamental to growing businesses and therefore jobs in the region.

● LAUSD and all districts must aim for making the region a national leader in assuring all children are ready to learn by the time they enter kindergarten. This means moving public schools from current status as vehicles for problem containment to exemplars of world-class excellence producing the most competitive candidates for participation in the new economy that the world has ever seen.

(Paul Vandeventer is President and CEO at Community Partners.)