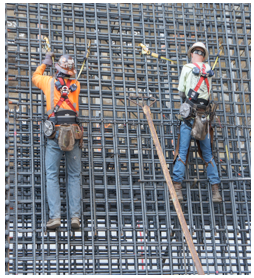 LEANING RIGHT-The construction crew completed a record setting pour of 21,200 cubic yards of concrete for the foundation of the new 73-story hotel and office tower at the corner of Wilshire and Grand.

The concrete, weighing 82 million pounds, was delivered by 208 trucks making 2,120 trips. The pour and entire effort was efficient and completed within the expected completion time.

The USC Trojans marching band paraded ahead of the first few concrete trucks before the start of the pour, which was marked with a ceremony attended by Los Angeles area dignitaries, including Mayor Eric Garcetti. Korean Air's CEO Yang-ho Cho was also on hand to oversee the event.

Later at night everything was in going full blast. It appeared there were a thousand workers in the complex, people on the street were directing the trucks, people on the street controlling and blocking all other downtown traffic, and the entire complex was lit up as if it were noon although it was midnight. It was overwhelming for me to take it all in.

Concrete foundation pours can also done in phases, but the continuous session is thought to result in a more structurally sound foundation, as well as being less costly.

Cold water piped in through several tubes embedded in the foundation will absorb heat from the curing concrete and help the hardening process, which is expected to take two weeks.

Grand Avenue itself is anchored on the north by the beautiful and gracious mile long Grand Park with its gardens, fountains, and lawns. The park is bordered by the Music Center and Disney Hall on the west to City Hall on the east. On the south Grand Avenue is anchored by South Park that includes Staple Center, LA Live, and the LA Convention Center.

The spire will rise atop the 71-story structure from a sloped, dome-like cap likened to a sail that encloses what officials term a “sky lobby.” That structure will render the tower the first Downtown high-rise without a blocky, helipad friendly roof.

Project architect AC Martin Partners has been working closely with officials from the Los Angeles Fire Department to win the blessing for the roof design, said project designer David Martin.

The structure still includes a small horizontal pad that could accommodate helicopter rescue operations, but it’s a slate of state-of-the-art fire safety infrastructure elements that would allow the tower to skirt the full helipad requirement, Martin said. Chief among the special safety elements is a “hardened” elevator that could function during four hours of fire conditions, said John Starr, a project architect with AC Martin.

The project will include high-tech LED lighting embedded in the building’s glass “skin,” but AC Martin has not finalized plans on how to incorporate the lights, Martin said.

Is this building starting to feel like the New York icon Pan Am building.

According to the project’s city approvals, the lights can broadcast advertisements on the lower podium and upper levels, but only non-commercial artistic imagery can be used in between. At question is where to place the lights in the tower — the denser the bulbs, the sharper the imagery, but more lights means a greater expense for a technology that could become outdated quite soon, Martin said.

A 900-room hotel will occupy the building’s upper floors. Beneath it will be 400,000 square feet of office space sitting atop a podium housing retail, restaurants and other amenities.

I returned later in the day and learned the concrete pouring was completed at 11 am and the crews were in the process of breaking down some of the molds and cleaning up. It will be fascinating to watch the growth of this complex over the next three years. Picture taking would yield a fascinating scrapbook for the grand kids.

It is also located across the street from the downtown hub of the Los Angeles Expo, Blue, Red, and Purple Metro Lines. It’s just a case of walking up to the street on the escalators. This will make picture taking a “piece of cake.”

Of note is the fact that Gloria Molina, Jose Huiza, and all other city politicos do not have much to do with this spectacular development except approving permits and then staying out of the way.

This is capitalism at its very best. Let’s watch it grow.

(Kay Martin is an author and a CityWatch contributor. His new book, Along for the Ride, is now available. He can be reached at [email protected] )