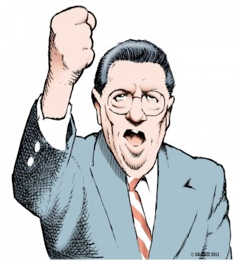 CAL BUZZ SPECIAL-As a political matter, Proposition 13 is sacred.  It’s been described by lazy reporters as the “Third Rail of California Politics” so often that you probably want to hurl every time you hear the phrase.

Forget fairness, though: If you want to start taxing business the same way you tax homeowners, you’ll have every chamber of commerce in the state and taxpayer groups come down on you like Chris Christie on a chocolate éclair.  Not that it would count for much, but the Republican Party would oppose any modification as well.  Unless you’re heavily into masochism, forget it.

But here’s a news flash, pessimists.  A Public Policy Institute of California poll has just found that almost 60 percent of likely voters favor changing the rules to tax business and homes the same way – i.e., a split roll system.  Even 43 percent of Republicans like the idea.

Combating conservative clichés: The problem is many people simply don’t understand that Prop. 13 gives business the ability to legally evade higher property taxes by maintaining a fiction of continuing ownership while homeowners can’t. Ordinary folks get dinged, big time, when a house changes hands, which explains side-by-side houses with huge differences in their taxes. Any disinterested observer knows that’s weird.

A campaign to restore fairness to property taxation would have every mayor, city council member, county supervisor, school superintendent and teachers union on its side, falling asleep with visions of more police officers, more firemen, fewer potholes.

But California’s reputation already ranks as the worst state in the union for business.  Wouldn’t changes to the tax system that makes business pay more in property taxes make it worse?  Not to worry.  No one pays much attention to Rick Perry.

A fairness campaign would face two major hurdles.  First, you have to wage an initiative campaign to get a Prop. 13 modification on the ballot; then, a second campaign to get the initiative approved by voters.  Prayer won’t work here.  Only realpolitik will.

Prop. 13 for the 1%: Here’s how it could work: The biggest issue in national politics now is the absurd level of wealth distribution between the plutocrats and everyone else. That sets the stage to use the strategy that is the gold standard for today’s political campaigns:  Resentment.

The campaign overcomes pro-corporate bleating with a message that casts the election as a choice between the little guy and the one percent. A TV ad portrays a repulsive capitalist – Tom “Kristallnacht” Perkins comes to mind – morphed into a top hat and a diamond stickpin. His message: working people have it too good; he’s entitled to the riches that Prop. 13 give him, and talk of reducing homeowners’ taxes by changing the system is dangerous socialism. Another spot focuses on Jamie Dimon’s recent, disgraceful 74 percent raise — $20 million a year — at J. P. Morgan.

The connection between Dimon’s raise and Prop. 13 may be a bit indirect, but Little Guy vs. Big Guy works with voters every time; in this case, that message has the virtue of being true.

Where, however, would the millions needed to overcome the misleading ads of the other side come from? Not from good government groups.  They have the facts on their side, but they don’t have the money on their side.  And don’t count on presumed good-government advocate Jerry Brown.  When last heard from on the subject, he said he “welcomed the discussion.”  Whoopee.

The solution is to take advantage of an emerging tradition in California politics:  Find a progressive Silicon Valley tycoon. An idealistic billionaire.  There must be at least one or two left out there somewhere.

Bottom line: Building a campaign on emotion rather than bone-dry statistics might make goo-goos and liberal idealists shudder – oh, dear, do the ends justify the means? – But it’s the best shot at correcting something that badly needs correcting in California.

(Chuck McFadden covered politics for The Associated Press in Sacramento. His biography of our very own governor, Trailblazer: A Biography of Jerry Brown is out from the University of California Press. This column was posted first at the excellent CalBuzz.com)