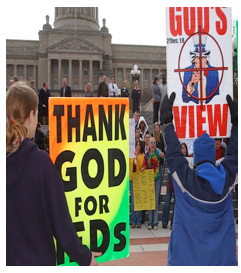 WHO WE ARE-Is the Westboro Baptist Church Engaging in a Giant Prank?

The WBC, masters of homophobic excess and famous for protesting at the funerals of American soldiers, are about to honor our own Lakewood, California with their presence.  The official announcement mentions whoremongers and continues to something slightly undecipherable concerning sodomy.

WBC press releases are certainly over the top, yet as some commenters have pointed out, they are missing a lot of the seriously depraved detail work characteristic of other hate groups. This causes skeptics to ask, Is Westboro Baptist Church just kidding? Consider: If some group carrying signs that say "God Hates You" were standing in front of your local high school, would you think they were being serious, rather than just engaging in some act of petty sadism? Or could this possibly be some deeply thought out attempt to discredit religion?

It's actually not that unreasonable a question. The patriarch of the group, a man by the name of Fred Phelps, was at one time the foremost civil rights lawyer in Topeka, Kansas. He is a man who grew up in the Jim Crow era in the deep south. He apparently won a lot of cases for a lot of minority clients. That should say something, but then there is this. In more recent years, he has put on a public personna that is horrifically opposed to the simple condition of being gay. The WBC made itself famous by protesting the funerals of American soldiers, supposedly as a protest against federal action such as the recission of the "don't ask, don't tell" rule. This has made them arguably the most hated group in America.

They started the latest round with a barrage of nasty epithets aimed at the community and at its high school students. (warning: not safe for work or for basically anybody this side of normal).

What's peculiar about the WBC protests is that they concentrate on people that the rest of us would consider to be innocent bystanders. Making light of the sacrifices of dead soldiers certainly fits that description.

Or consider how they go after the latest generation of high school students in one small American suburb. "This generation of two-legged AIDS pustules trolling about America's high schools looking to "hook up" with hapless scrotes is epitomized in Lakewood High School. Every filthy sex practice, and the soul-damning lies that coddle the basest of human depravity (i.e., grinning sodomites) underpins and overarches the curriculum. Three-word zingers from WBC's love fests -- taken in heaping doses for breakfast, lunch, dinner, and every between-meal snack -- are the only hope for any soul dwelling in that City of Destruction named Lakewood, California."

Perhaps they can explain to the media the meaning of the word scrotes when they arrive. The British version of an online dictionary explains delicately that it is "a contemptible person," but the American version follows it up by explaining that the term is a shortened form of scrotum. These Westboro folks certainly are obsessed with a certain region of the body.

By "three-word zingers," we may presume that WBC means the signs that they love to carry that refer to those whom the almighty hates. And they use that word "hate" rather freely. None of this "love the sinner but not the sin." Not this group.

Is this a parody or serious anger?

There is an internet term for something that is so extreme that it is indistinguishable from satire. It's called a Poe, named after Nathan Poe rather than Edgar Allen Poe. Several years ago, the modern Poe pointed out that some of the comments on a creationist discussion site were so extreme that it was literally impossible to tell whether they were expressions of religious faith or counterarguments raised in the form of satirical comments. Is the whole Westboro Baptist shtick a Poe? A kind of performance art that subtly denegrates religious belief?

That's clearly the effect on a lot of people.

Consider the act of calling people AIDs carrying pustules with a hook-up culture. I think this is supposed to be a negative characterization in Kansas, although it might be considered values-neutral in warmer climates (OK, so I just wrote a Poe). In any case, generating this level of expression about a school that is 1500 miles away from their home office is making a stretch. I mean, couldn't they find some place in New Mexico or Arizona to picket? Instead we get this semi-adolescent stream of epithets pointed at a civilized and moderate town in southern L.A. County.

If it isn't trolling, it might as well be. After all, getting the mass of people furious at your group because you have defiled the funerals of dead soldiers or insulted the whole city they have worked to build doesn't win you a lot of public sympathy.

I'd like to borrow a line from comedian Andy Borowitz. A couple of years ago during the height of the Republican presidential primary season, Borowitz pointed out that the whole thing had gotten so ridiculous that it was awfully close to becoming a prank. The audience pondered the remark thoughtfully for a moment, and like a ripple turning into a wave, one by one realized that this was an ultimately true statement. All you had to do was think of Governor Perry and Michele Bachman, and you were this close to the conclusion that they were all just engaging in a huge practical joke. Then we thought about it a few more seconds and concluded that most of them probably weren't kidding. Of course, you never know when it comes to Newt Gingrich.

So when the WBC announces with its usual fanfare that it will be visiting Lakewood High School at 7:15 AM one morning early in March, and this after the WBC had already picketed the Lakewood Church of Lakewood, Colorado. We were left to wonder if there is any particular reason, other than maybe that the patriarch has some bug up his nethers for any place called Lakewood. If that is so, maybe they will soon schedule protests at Lakewood, Washington and Lakewood, Ohio. Maybe Fred Phelps finds Kansas overly dull, and looks for places near the Rocky Mountains, the Pacific Ocean, or the Great Lakes, and which also happen to be called Lakewood.

The Westboro folks are nothing if not tightly scheduled. They are only willing to give the high school kids 30 minutes of their precious time. Then they are off to church. Well, actually not one church, but four. They are pretty ecumenical about things. They plan to give bad tidings to the Lutherans, the Catholics, the Methodists, and -- get this -- the West Lakewood Baptist Church.

The high school protest is scheduled for 7:15 to 7:45 AM. A Lakewood HS graduate interviewed by City Watch explained that this is the time that students would be arriving at the school. The church protests don't begin until 9 AM. Maybe the Westies scheduled a prayer breakfast that they haven't told us about.

For some reason, the church protests are to be short, with the last one at St Pancratius finishing at 11 AM.

Coming all the way from Topeka to spend less than 4 hours in Lakewood seems like an unholy waste of gasoline.

I think there is an explanation for the antics of Fred Phelps and his family. I don't think they are trying to use street theater to parody the institution of religion. Doing what they do once or twice would suffice if that is what you really wanted to do. They have spent way too much time, money, and effort if this were just satire.

I think it's something a lot simpler. It's the fundamentalist version of exhibitionism. Some people just have an emotional need to be in the limelight. If they can't do it by playing Hamlet at the Globe or running for president, they find some other venue. People who are sincerely interested in saving souls and ministering to the needy do so. They don't generally make a practice of taking their hatred out on the city streets and directing it against the nation's war dead, at least not in this country. To engage in this kind of activity, you need to have a serious psychological need to be the center of attention.

In this sense, it doesn't even matter whether you are sincere in your homophobia or not. You just pick a topic that has resonance with some people (negative or positive, it doesn't really matter) and then you make sure to invite the television news trucks.

The real news story in Lakewood, come March 3, will be the number of TV trucks and news reporters who show up at 7:15 AM.