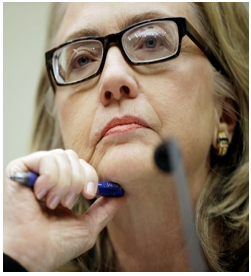 FROM PRIVATE ARCHIVE WHAT SHE SAID AND WROTE-On May 12, 1992, Stan Greenberg and Celinda Lake, top pollsters for Bill Clinton’s presidential campaign, issued a confidential memo. The memo’s subject was “Research on Hillary Clinton.”

Voters admired the strength of the Arkansas first couple, the pollsters wrote. However, “they also fear that only someone too politically ambitious, too strong, and too ruthless could survive such controversy so well.”

Their conclusion: “What voters find slick in Bill Clinton, they find ruthless in Hillary.”

The full memo is one of many previously unpublished documents contained in the archive of one of Hillary Clinton’s best friends and advisers, documents that portray the former first lady, secretary of State, and potential 2016 presidential candidate as a strong, ambitious, and ruthless Democratic operative.

The papers of Diane Blair, a political science professor Hillary Clinton described as her “closest friend” before Blair’s death in 2000, record years of candid conversations with the Clintons on issues ranging from single-payer health care to Monica Lewinsky.

The archive includes correspondence, diaries, interviews, strategy memos, and contemporaneous accounts of conversations with the Clintons ranging from the mid-1970s to the turn of the millennium.

Diane Blair’s husband, Jim Blair, a former chief counsel at Tyson Foods Inc. who was at the center of “Cattlegate,” a 1994 controversy involving the unusually large returns Hillary Clinton made while trading cattle futures contracts in the 1970s, donated his wife’s papers to the University of Arkansas Special Collections library in Fayetteville after her death.

The full contents of the archive, which before 2010 was closed to the public, have not previously been reported on and shed new light on Clinton’s three decades in public life. The records paint a complex portrait of Hillary Clinton, revealing her to be a loyal friend, devoted mother, and a cutthroat strategist who relished revenge against her adversaries and complained in private that nobody in the White House was “tough and mean enough.”

On July 28, 1997, President Clinton was facing yet another wave of allegations from yet another woman. Kathleen Willey had accused Clinton of sexually assaulting her, and Blair faxed a Drudge Report item about her claims to one of the president’s aides.

Blair’s handwritten note attached to the story: “Do we take Matt Drudge seriously?”

Six months later, Drudge would break the story of an affair between Clinton and 22-year-old White House intern Monica Lewinsky, setting in motion the events that would lead to the president’s impeachment.

When Clinton finally admitted to the relationship after repeated denials, Hillary  Clinton defended her husband in a phone call with Blair. She said her husband had made a mistake by fooling around with the “narcissistic loony toon” Lewinsky, but was driven to it in part by his political adversaries, the loneliness of the presidency, and her own failures as a wife.

She told Blair that the affair did not include sex “within any real meaning” of the term and noted President Clinton “tried to manage” Monica after they broke up but things spiraled “beyond control.”

Blair described the contents of the Sept. 9, 1998, phone call in a journal entry.

“[Hillary] is not trying to excuse [Bill Clinton]; it was a huge personal lapse. And she is not taking responsibility for it,” Blair wrote.

“But, she does say this to put his actions in context. Ever since he took office they’ve been going thru personal tragedy ([the death of] Vince [Foster], her dad, his mom) and immediately all the ugly forces started making up hateful things about them, pounding on them.”

“They adopted strategy, public strategy, of acting as tho it didn’t bother them; had to. [Hillary] didn’t realize toll it was taking on him,” Blair continued. “She thinks she was not smart enough, not sensitive enough, not free enough of her own concerns and struggles to realize the price he was paying.”

Hillary Clinton told Blair she had received “a letter from a psychologist who does family therapy and sexual infidelity problems,” who told the Yale Law School graduate, “most men with fidelity problems [were] raised by two women and felt conflicted between them.”

The psychologist suggested that Bill’s infidelity had its roots in his childhood.

“He’d read about Bill’s bio; grandmother despised [Bill’s mother] Virginia, tried to get custody of Bill; Bill adored by his mother, but she left him, etc. etc.”

In her conversations with Blair, the first lady gave her husband credit for trying to end the affair with Lewinsky, and said he did not take advantage of his White House intern.

“It was a lapse, but she says to his credit he tried to break it off, tried to pull away, tried to manage someone who was clearly a ‘narcissistic loony toon’; but it was beyond control,” wrote Blair.

“HRC insists, no matter what people say, it was gross inappropriate behavior but it was consensual (was not a power relationship) and was not sex within any real meaning (standup, liedown, oral, etc.) of the term.”  (Read the rest … including how psychologist explained the Clinton affairs … here.)