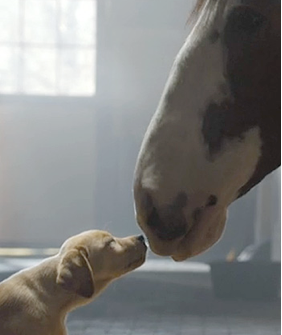 THE VIEW FROM HERE-Each day our living rooms are bombarded by television commercials.  Some are outrageous-- even bordering on the vulgar or insensitive--while others are beautiful, inspirational, poignant, and even thought-provoking.

They tell us what to wear, what make-up to use, which cars to buy, where to live, which candidate to endorse, which college to attend, which team to support, what insurance to buy; what play, movie, concert, or television show to watch.  So much from which to choose--so little time.

Sometimes the messages are misleading; at other times, they are spot on.  After all, don’t famous actors give credence to the products they advertise?   Don’t doctors stand by their words of advice?  They certainly would not lead us astray!  We just have to decide how, when, and where to buy.

This last Sunday we watched with great anticipation the Super Bowl commercials which have become a uniquely American institution.

For as long as I can remember, Coca Cola has brought us memorable ads that also send a message.  Do you remember the beloved “I’d Like to Teach the World to Sing (in Perfect Harmony)”?  It depicted young people on a hillside representing the ethnic diversity of the world and offering through their music, love and hope.  This year, Coke invited us to witness a marvelous new rendition of  “America, the Beautiful.”  It was sung in a variety of languages that reflect the mosaic of American tongues.  One scene presents a loving gay couple; it is done in honor of the song’s author, Katherine Lee Bates, a lesbian, who at the time was living with her partner in what then was called a “Boston marriage.”

Many believe that that song should be our national anthem instead of the “Star-Spangled Banner” which seems to glorify war.  I too prefer that song except for its reference to God.  Since our nation is filled with atheists and agnostics and people of other religions that don’t share our notion of a god, I hesitate to endorse the song (as lovely as it is) because of how it would preclude such a large number of people from that feeling of harmony and oneness that it is meant to conjure.

What about the ongoing Polar Bear series?  What better message is there than teaching that sharing is a good thing and helping each other benefits all?

Microsoft made a stunning ad on how modern technology can change our lives in a good way.  Back in the day when we discovered how to split the atom to create energy, we did not have to take the next step which developed the horrendously destructive atom bomb, but we did.  No question, we do need safeguards (think of Ray Bradbury’s prescient short story, “The Flying Machine.”).   Microsoft made it clear that “Technology has the power to unite us.”  I cannot say it better than the commercial did, so here are some of those lofty points:  “It gives hope to the hopeless” (what a beautiful moment when a person hears for the first time or walks once again). “It has given voice to the voiceless … Technology has taken us places we have only dreamed of.  How far can we go?”  Technology is meant to inspire and it asks us, What can we do with this new expertise?   What can I do?

The Axe commercial whose theme is “Make Love, Not War” promotes its new product, Peace.  It hits the nail on the head.  This is a message that we first heard decades ago in the 1960s and still resonates!

Budweiser—always tugging at our heartstrings with animal vignettes, did not disappoint us this year either:  The theme, “love has no boundaries,” can certainly make a case for just how blind love is:  whether our love is inter-racial, inter-religious, or same gender—we love with our hearts and minds.   It seems so much easier to fall in love with anthropomorphic stories, using animals, than invoking the images of real-people.  Nevertheless, if puppies and horses cans love each other and be inseparable friends, then none of us should interfere with what draws others together in meaningful, committed relationships.  Ah love, true love!  What is better than that?!

Budweiser also presented an outstanding video on “Welcoming Home Our Hero Veterans.”  An entire real town got together (with Budweiser’s sponsorship) to tell their veteran how much he was respected and admired; how appreciative they were of all the sacrifice he had made on their behalf.  They also hoped that this clip would set an example for all cities to welcome their own veterans (unlike the way our returning Viet Nam veterans were virtually shunned).  The townspeople stated, “We want every community in America to recognize what they all did” for us and the world.

Not surprisingly, however, some commercials can also create controversy (even some of the above).

Personally, I must admit that I was rather taken aback by the “patriotic’ commercial that seemed to be written by the Tea Party—inviting us to revolt when we don’t agree with national policy.  Maybe we should all take a look at what the Constitution really says and what our Founding Parents had in mind.

David Beckham, on the other hand, made us marvel at his lithe movements while advertising for H & M Bodywear.   Haven’t we always admired the stark beauty of the ancient Greek and Roman statues?  What about Michelangelo’s David?  Yet when Americans are asked to look at a well-sculpted body, they go berserk!  Maybe we need to re-examine some of our values.  Europe seems to be way ahead of us (and they are not degenerates).  After all, half-naked can be beautiful too!

What about that marvelous Cheerios commercial?  Can any little girl be more adorable than the daughter of that mixed couple?  The family is charming.  What can be more natural than loving parents interacting with their child?  Yet, there are people that still object to seeing an inter-racial couple come into their homes.  Maybe they feel threatened that a relative of theirs might be persuaded to marry outside of their race as well.  Hey, folks!  The Millennials and Generation Z have grown up with friends and family members that represent eclectic units—it seems natural to them.   I think that perception is pretty neat.  Besides, it seems to be the case that children of mixed marriage draw from the best traits of both sides—cuter, smarter, better educated, better behaved.

There are so many advertisements—on television, the radio, print media, the web.  They come at us every day in every way.  We need to take a moment to find the message behind the message.  We can support that viewpoint or oppose it.  Many ideas will provoke discussion—and that is a good thing.  But we cannot be mean-spirited.  We need to seek out the positive messages and learn how to reject the negative analyses that are meant to divide.  We should recall what Marshall McLuhan enigmatically said, “The medium is the message,” and perhaps interpret or re-interpret what he had in mind. He says that the medium “is an extension of ourselves” and, therefore, has an impact on our every thought and action, our inter-connectedness with other people and institutions.

Thus, a commercial is more than a commercial.  We can be entertained by it.  We can be convinced to purchase a product.  Our attitudes can be changed.    Certainly I am not attempting to make advertising campaigns more than what they are--neither am I trying to make them less. Our world can be better or worse depending on what we do with what we observe and learn.

Apple’s  iPad Air commercial challenges all of us to think differently about ourselves and why we are here.  It reaches both our hearts and our minds   It speaks of  “what it means to be human” as it links science with liberal arts.  In the background we hear the inimitable voice of Robin Williams as he speaks to his class in the heart-rending movie, Dead Poets Society:

We don't read and write poetry because it's cute. We read and write poetry because we are members of the human race. And the human race is filled with passion … [N]oble pursuits are necessary to sustain life. But poetry, beauty, romance, love, these are what we stay alive for. To quote from [Walt] Whitman, “That you are here--that life exists, and identity; that the powerful play goes on and you may contribute a verse.

That the powerful play goes on and you may contribute a verse. What will your verse be?

Yes, how will we let commercials influence the verses we shall write?  It is all up to us.

(Rosemary Jenkins is a Democratic activist and chair of the Northeast Valley Green Coalition. Jenkins has written Leticia in Her Wedding Dress and Other Poems, A Quick-and-Easy Reference to Correct Grammar and Composition and Vignettes for Understanding Literary and Related Concepts.  She also writes for CityWatch.)