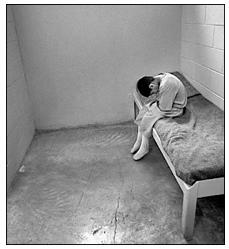 GUEST WORDS-It is not easy to get the United States Congress to agree and act on much. The United States Senate did, however, unanimously pledge to acknowledge and address modern-day disparities for children in the juvenile justice system in a resolution commemorating the 40th anniversary of In re Gault, 387 U.S. 1 (1967), the United States Supreme Court decision affording children in delinquency proceedings the right to counsel, and other due process protections.

The Gault Court, which held any child facing "the awesome prospect of incarceration" needs "the guiding hand of counsel at every step in the proceedings against him," might be dismayed by the current attorney appointment process for children in Los Angeles County.

Los Angeles has one of the largest juvenile justice systems in the world, processing approximately 20,000 youths annually. About 11,000 of these youths are ineligible for representation by the public defender because of a conflict of interest. They are represented instead by appointed panel attorneys who receive a flat fee of approximately $350 for the life of a case, regardless of its complexity.

As any young person who has been through the juvenile justice system can attest, the quality of representation he or she receives is critical. Children in the justice system need trained attorneys who can obtain crucial records and advocate for children's medical, educational, mental health, social, and emotional needs. These same attorneys must also protect children's constitutional rights by interviewing the child, employing investigators, having expert witnesses appointed, objecting to inadmissible evidence at adjudicatory hearings, advocating for the least restrictive alternative at disposition, and pressing, at every stage, for the child's expressed interests.

Public defenders are prepared to provide such quality representation. They are carefully vetted, receive extensive training, rewarded for zealous representation, and held to clear standards.

Not surprisingly, the data demonstrate public defenders are more active in the courtroom, and more likely to file motions, have expert witnesses appointed, and request release and dismissal of their juvenile clients' cases than contract panel attorneys, who are financially penalized for hard work and not subject to any specialized training requirements.

The current inequitable system leads to less favorable outcomes for youth represented by panel attorneys, and can have dire consequences for youth, at disposition and afterwards.

The U.S. Department of Justice has found that when contract systems are created for the purpose of containing costs, they pose significant risks to the quality of representation and the integrity of the criminal justice system.

Gerald Uelman, executive director of California's Commission on the Fair Administration of Justice, has called the spread of low-bid, flat-fee representation "a race to the bottom."

In addition to harming children and flouting principles of fundamental fairness and due process, the current structure wastes taxpayers' dollars.

They are also exorbitantly expensive.

According to a recent Loyola Law School study, 586 youths who were represented by contract panel attorneys in 2012 could have received a lower level alternative disposition had they been represented by an equivalent public defender. It costs Los Angeles County approximately $32,382,360 to detain 586 youths in probation camp for an average of 180 days.

In addition to the costs of unnecessarily severe dispositions, mistakes -- which are inevitable in an underfunded contract panel system -- create even more expenses down the line through appeals or writs, which must be filed to undo the injustice, and subsequent retrials. The costs for appellate counsel, court processes, and investigation are substantial, and youth may be forced to remain in custody throughout the appellate process.

By maintaining the current, inequitable system, the County also risks the potential additional expense of litigation for failure to address the serious due process concerns about the flagrant disparity in representation for children, and the integrity of the attorney appointment process.

As United States Supreme Court Justice Stephen Breyer testified last year before Congress in a hearing about sequestration and public defender budget cuts, "It is cheaper to have a decent lawyer in the first place."

The good news is Los Angeles County now has the opportunity to address the inequities in its current system, save taxpayer dollars, and ensure all children in its juvenile delinquency system receive competent representation.

Next week, the Los Angeles County Board of Supervisors will hear an important motion introduced by Supervisor Mark Ridley-Thomas to examine and recommend improvements to the delinquency representation system.

The Board of Supervisors should pass this critical motion.

Reviewing and improving the compensation scheme governing the attorney appointment process for juveniles in no way disparages panel attorneys. Defense attorneys know how important adequate resources, training, and support are to represent clients effectively. All attorneys representing indigent children should be supported and rewarded for hard work, not penalized. This motion simply honors and elevates the importance of representation for indigent children.

The Los Angeles Board of Supervisors has an opportunity, and a corresponding obligation, to address disparities for children in the juvenile justice system. May the Board get it right next week, pass Supervisor Ridley-Thomas's motion, and honor the spirit of In re Gault. And by taking a critical step to achieve greater justice for vulnerable children, perhaps Los Angeles will inspire the rest of the state and the country to follow.