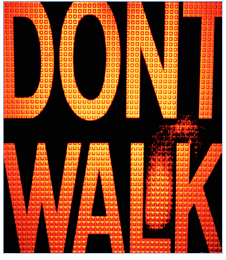 GUEST COMMENTARY-A joke Canadians tell on themselves: Q. How do you tell the Canadians on the streets of a big American city? A. They’re the only ones waiting for the walk sign to go green.

Actually, compared with East Coast urbanites, most Southern Californian pedestrians, insofar as we are ever on foot, have long been more respectful of both traffic signals and of prohibitions against jaywalking.

In New York City, a real walking town, virtually no one pays attention to the nominal instructions given by machines. If it looks more or less safe to go, people go. And crossing the street in the middle of the block while on foot is entirely the rule rather than the exception. Technically it’s illegal to jaywalk there, too, but no one can remember anyone getting the $50 fine such an infraction supposedly carries.

But the Missing Persons song with the line “nobody walks in LA” is being turned on its head as parts of our megalopolis are becoming places suddenly teeming with pedestrians. And, naturally, as in other big cities, busy people with places to go are taking the law into their own, well, feet and increasingly ignoring the technicalities of the blinking signs.

In recent weeks, though, the Los Angeles Police Department has been trying to get us back on the straight and narrow by cracking down with a vengeance on the new scofflawism, issuing tickets with very high fines to pedestrians.

With what seemed to be a certain glee, The New York Times even published a front-page story on the phenomenon, reporting on cops who were issuing very expensive tickets for what seemed to be the smallest of on-foot infractions in downtown Los Angeles: “When Adam Bialik, a bartender, stepped off the curb on his way to work at the Ritz-Carlton a few blinks after the crossing signal began its red ‘Don’t Walk’ countdown, he was met by a waiting police officer on the other side of the street and issued a ticket for $197.”

Bialik told the cop he had no idea it was against the law to start walking during the countdown. Who did know?

Surely the Police Department is after our own best interests here, including our safety. And there are legitimate traffic-control reasons to ensure that pedestrians don’t jump out into the street willy-nilly while motorists are trying to navigate, especially during rush hour.

But this kind of crackdown has every possibility of nipping in the bud a pedestrian culture that is just beginning to flourish in a Southern California, where for too long the automobile has been the sole king of the urban jungle. Both the tourists and the locals who are flocking to the sidewalks of downtown could get a message that their kind are still not welcome here. If safety is truly the concern of the LAPD, begin an education program, not an entrapment one.

And do pedestrians suddenly have to start carrying government-issued IDs with them as motorists do in case they might face the long arm of the law while walking? Other countries may require that people carry “papers” at all times, but here it’s an un-American stricture.

Do help us ensure the safety of drivers, walkers and, yes, cyclists, Southern California police departments, as we figure out how this new mix of transit options works. But enough with the crackdown mentality.

There are real crimes in the big city, but strolling is not one of them.