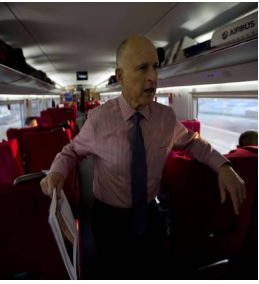 ALPERN AT LARGE-To set things straight, and before I am attacked by the zombies on the left and right, I am a high-speed rail supporter.  I am also a proud supporter of the efforts to bring Metro Rail into LAX, and still support both the Expo Line and its often-ignored eastern extension, the Downtown Light Rail Connector.  Ditto for the Wilshire Subway, and for every reasonable freeway, road, bicycle lane and pedestrian walkway widening/or and upgrade.

But the key word I want to throw out is the word REASONABLE.  As in CREDIBLE.  As in COST-EFFECTIVE.

You can learn it from me, or you can learn about it on your own from Metro or the Southern California Association of Governments (SCAG), that transportation projects have to have three key elements to succeed:  Consensus, Planning and Funding.

More on that below, but I urge and plead with every reader to never forget those three key elements:  Consensus, Planning and Funding.

It is therefore with simultaneous sadness and hope that I learned that Superior Court Judge Michael Kenny found that the California High Speed Rail (CAHSR) Authority ruled that state officials cannot tap billions of dollars in voter-approved bond funding for construction, which could cause indefinite delays (or even kill) the $68 billion project.

Sadness in that the high-speed rail for which I fought is in peril, but sadness in that those who lobbied for it and sold it for Californians pulled a terrible, unforgiveable bait-and-switch on California voters and taxpayers.

Hope in that the hard decisions--even to scrap the project as is--will be confronted because we can't afford to lose tens of billions in construction and operational costs for a project that appears to be in the way of, and not sufficiently supportive of, transportation (especially rail) projects that this state's residents want and need more than this dead-end, doomed project.

And hope in that the promise of high-speed rail can be resurrected in more carefully-thought and transparent proposals to the Californian taxpaying public.

The problem with this CAHSR project--as is--was that it was sold to the taxpaying public as a perfect, all-problem-solving effort.  Fast as a plane from LA to San Francisco.  For only $33 billion, to boot.

That's how the CAHSR funding law was built and written, and so therefore the state bonds necessary to fund the project as is--slower and twice the cost (perhaps thrice, when it's all said and done)--cannot legally be raised.

And it's anyone's guess how the CAHSR plan as is can ever survive.  To quote the old expression, "what a train wreck!"

Yet high-speed rail already IS popular, and perhaps the legacy of Governor Jerry Brown--if he's got the courage and credibility to do it--can be to admit that the CAHSR was an idealistic but unrealistic first start for a state high-speed rail network that remains popular among most Californians...so long as it's done right, and it's done both reasonably, responsibly, and realistically.

Imagine if the state had a duo of measures to both scrap the CAHSR project as is and create a new project that reflects what already IS working well in California:  the Caltrain network that serves the Bay Area from San Jose to San Francisco to Sacramento, the Metrolink network that serves the Greater Southern California region, and the LOSSAN Corridor Rail from Los Angeles to San Diego.

Give back the promised billions to the feds, and perhaps under a new promise of keeping that money for projects that should work, in conjunction with a new $10 billion bond measure that would expand the aforementioned higher-speed rail networks to LAX, Ontario, San Diego and all airports in the region, to say nothing of expanding services and speeding up the trains we already have (but are currently too slow and unreliable) with Amtrak.

Defined projects, with a prioritization from the counties' transportation engineers and political leaders, and with a $10 billion cap.  This would NOT be a blazing train that went as fast as a plane...but it would be affordable, usable, and do-able within our lifetimes.

And for those who have a problem with all that, I'd remind you that you are probably in the minority right now, and I'd demand you go to the nearest chalkboard and write out "THE PERFECT IS THE ENEMY OF THE GOOD" a hundred times until you got that through your thick, top-down, authoritarian skulls.

Similarly, the Times editorial staff (with whom I usually disagree with, because they're so ridiculously to the left) has it correct when they recommend slowing down with respect to new taxes for rail and other projects.

We need rail projects like the Wilshire Subway, Downtown Connector and Metro Rail/LAX Connector, and we need freeway and road projects that are too numerous to describe here.  Ditto with bicycle, vanpool, bus and pedestrian improvements.

But we need to rethink and reprioritize our Metro project priority list (the Metro Long Range Transportation Plan) to reflect the needs of the entire county, and not just the needs of the City of Los Angeles--which is why Measure J failed.

So I'll gladly break with many of my fellow transportation advocates when I adhere (I've always believed this, and never stopped believing this) to the notion that the full, complete Wilshire Subway to the 405 freeway must be built only when key rail lines in the rest of the county are on their way to being simultaneously built.

In other words, getting the growing regional light rail system to LAX, Torrance and Claremont are as critical to passing a countywide bond measure to expedite the Measure R projects as is the promise of expending the Wilshire Subway.

So I'll conclude by reminding any and all readers that there has to be Consensus, Planning and Funding for a transportation project to work.  That may appear to be the chicken/egg conundrum, but if we don't have Consensus, and if we don't have Planning, then we'll never get any Funding.

That means we have to change the Metro Long Range Transportation Plan to show as much love to the South Bay, the Southeast L.A. County cities and the San Gabriel Valley as we do to the Westside and Downtown regions of the City of Los Angeles.

Consensus is critical to ensure that the voters will pay for something, Planning has to show it's affordable (not a gimmick, but a for-real analysis that will be bulletproof against lawsuits), and then and only then can the Funding can be asked for.  We did things too much in reverse for funding a CAHSR that was built on entirely-false premises, and now we're on the verge of a calamity for state infrastructure planning and construction.

But we've got to remember to keep things real, and to not treat the voters like idiots.  The voters will be flexible and reasonable as is consistent with human nature...but they're not stupid, and they deserve respect.

(Ken Alpern is a Westside Village Zone Director and Boardmember of the Mar Vista Community Council (MVCC), previously co-chaired its Planning and Outreach Committees, and currently is Co-Chair of itsMVCC Transportation/Infrastructure Committee. He is co-chair of the CD11 Transportation Advisory Committee and chairs the nonprofit Transit Coalition, and can be reached at [email protected] This email address is being protected from spambots. You need JavaScript enabled to view it. . He also co-chairs the grassroots Friends of the Green Line at www.fogl.us . The views expressed in this article are solely those of Mr. Alpern.)