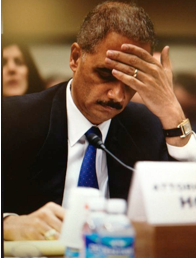 CERDAFIED-I guess the high pitch screams of Americans are being heard by Republicans. Apparently, the Republicans are now willing to formally introduce articles of impeachment this Thursday against the one man who has failed to hold Obama accountable for his unconstitutional actions. Attorney General Eric Holder has been accused of being deliberately deceptive when providing testimony to Congress.

He is also accused of other violations of law, including refusing to provide documents related to Operation Fast and Furious. Once a congressional subpoena is issued, it is a violation of federal law to withhold the documents that they requested. President Barack Obama exercised his executive privilege over the documents in question. Now several GOP congressmen have joined together, in response to a growing public demand, to remove Holder from office.

According to National Imagery and Mapping Agency’s Guide to Marking Documents, In no case shall information be classified in order to “Conceal violations of law, inefficiency, or administrative error; or to “Prevent embarrassment to a person, organization, or agency.”

Withholding the documents in question prevented the congressional committee from performing oversight of the executive branch, which is their constitutional duty. The House voted to hold him in contempt of Congress in 2012.

Holder’s department has failed to prosecute IRS officials who allegedly accessed confidential taxpayer information of political donors and candidates without authorization. This Nixon-like behavior has consequences. Failing to prosecute the appropriate parties speaks volumes. While Holden found time to pursue journalists and whistle blowers, his office became the long arm of retaliation not justice.

Rep. Pete Olson (R-Texas) has taken the lead on this action, convincing other Republicans to join in the effort. Rep. Phil Roe of Tennessee, Rep. Ted Yoho of Florida, Rep. Lynn Westmoreland of Georgia, Rep. Larry Bucshon of Indiana, Rep. Blake Farenthold of Texas, Rep. Randy Weber of Texas, Rep. Roger Williams of Texas, Rep. Bill Flores of Texas, Rep. Louie Gohmert of Texas and Rep. Michele Bachmann of Minnesota have rallied to the cause.

TheBlaze TV interviewed Rep. Ted Yoho (R-Fla.) on Wednesday night and he confirmed the impeachment effort and released a five-page outline of the four articles of impeachment that will be filed against Holder:

“Article I of the impeachment proceedings claims that Holder “engaged in a pattern of conduct incompatible with the trust and confidence placed in him” by refusing to comply with a subpoena issued by the House Oversight and Government Reform Committee for documents related to “a legitimate congressional investigation into Operation Fast and Furious by the Bureau of Alcohol, Tobacco, and Firearms that put thousands of illegally-purchased weapons into the hands of cartel leaders, ultimately resulting in the death of U.S. Border Patrol Agent Brian Terry on December 14, 2010.”

Article II Holder violated his oath of office by refusing to enforce certain laws that the Obama administration, for various reasons, decided not to enforce, including the Defense of Marriage Act, which the administration deemed unconstitutional.

“If the Administration wants to change the law, it should ask Congress to amend it. Only the Supreme Court can deem laws unconstitutional,”

Article III Holder violated his oath of office by “refusing to prosecute individuals involved in the Internal Revenue Service scandal of unauthorized disclosure of tax records belonging to political donors.”

Accountability seemed to be in small quantity in American politics. This action was long over due. It would not take too much speculation to question, who is next? Are the Republicans testing the water by starting with Eric Holder? What will be the reaction of American voters if they proceed against Obama after successfully ousting Holder? Are they taking advantage of Barack Obama’s approval rating freefall and cautiously choosing their first target?

Have the Republicans found an ounce of courage or just a common cause amongst its easily divided party?  Either way, if this impeachment is successful, a real power shift will take place. Not Democrat vs Republican, but right vs wrong, and the congress vs the POTUS.

Never have I seen such an absence of balance in the power structure of the American politics. There has been very little relief coming from our Supreme Courts. The Republicans had become an extension of the Democrat party, so intertwined and ineffective that the third party picked up real momentum. No matter which party you belong to, the check and balances are paramount to preventing abuse of power.