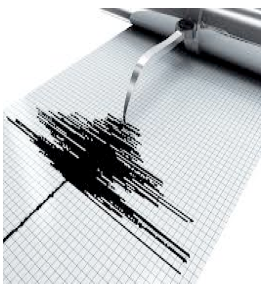 GELFAND ON … QUAKES AND POLITICS-Get used to doing without your stove or hot water heater for the next month or two. Forget about your gas furnace too. That's what will happen if a substantial earthquake hits the Los Angeles area anytime in the near future.

Unless you have an all-electric home, a substantial earthquake is going to put you back into the Stone Age by taking out your use of natural gas. Either that or you are going to be doing a lot of microwaving in order to substitute (poorly) for all those other amenities. That's because, following the 1994 Northridge earthquake,  the city government of Los Angeles passed an ordinance that has resulted in a large fraction of our dwellings being hooked up to seismic shutoff valves on their gas lines. A quake of around 4.5 on the Richter scale anywhere near your residence will set off that valve. A larger quake will set off the seismic shutoff valves in a widespread area.

In the period following a major earthquake, those valves are not going to be turned back on for days or weeks. The advantage is that there won't be internal gas explosions in those homes, but there won't be the ability to use your appliances either.

That means that we will be safe, but we are also going to spend a lot of time dealing with cold and hunger.

Think back to January 17, 1994, at 4:31 in the morning. A lot of us woke up to quite a ride, which we have come to refer to as the Northridge earthquake. As the fault shifted 12 miles below the surface, compression waves went out through the rock and soil. Our beds accelerated up and down or side to side inside our bouncing houses. The quake shook Northridge intensely, and even knocked down chimneys in Santa Monica, tens of miles from the epicenter. The intense shaking took out buildings and carports.

Out of a sense of caution, some homeowners and apartment dwellers shut off their gas supplies. Electricity and water were also shut off in some places.

Water and electricity can be turned back on by turning a valve or throwing a switch at a substation. We have plenty of recent experience with that. When the electricity has gone out in recent months, we have merely had to wait, and at some point it comes back on. The same holds true for a water shutoff either to a whole neighborhood or to a single building. Some employee of the water company will turn a valve, and you are back in operation.

That is decidedly not the case when it comes to a gas shutoff. The dangers involved in the homeowner attempting to turn on the gas by himself are substantial. The Gas Company recommends that turning the gas back on after a shutoff be done by a Gas Company employee or a qualified plumbing contractor.

And that's where the problems would begin after a substantial quake in the Los Angeles basin. To understand why the problem will be worse than it has to be, we need to consider a little political history (don't we always).

In the post-Northridge earthquake days, the city of Los Angeles reacted by passing a law that required the installation of seismic shutoff valves. The law was designed to be phased in slowly. It began for any building that changed ownership after 1998. The law also applied to new construction beginning September of 1995. The result, according to a Southern California Gas Co employee,  is perhaps half a million homes with the seismic valves.

Imagine a region-wide quake with strength in the sevens. There is going to be a lot of territory that has shaking strong enough to shut off every seismic valve in the area.

One problem is going to be that the existence of the valves actually makes it more difficult to identify homes that have suffered damage to their gas lines. Why is that? Because there will be thousands upon thousands of homes that have to be inspected before turning the gas back on, even though there was no other reason for turning off the gas other than that the shutoff valve automatically tripped. In order to find and fix the few damaged gas lines that will be created by a major earthquake, the Gas Company will have to check every home with a tripped shutoff valve, and out of that large number, the few that have this kind of damage will be identified.

It's interesting that the Gas Company does not advise homeowners to shut off their gas valves just because there has been a small earthquake. If you go to the website for Southern California Gas, you will find advice that comes down to the fact that you should become aware of the signs of a gas leak. How many of us were aware that a patch of dead grass in an otherwise robust lawn is a potential sign of trouble? The Gas Company also warns you to be aware of a hissing noise or the smell of a gas leak. Their advice? Leave. Go somewhere else and call them.

In fact, the Gas Company warns you that you should only turn off the gas supply if it is safe to do so. That strikes me as a limited message -- I mean, how would you really know that it is safe to turn off the gas except that nothing blew up after you did it? They are concerned about the fact that any small spark, even one created by a little bit of static electricity, could set off an explosion if there is a dangerous buildup of gas in an enclosed space.

When you think about it, this is all part of a system that is designed to keep people safe during normal times, but not to overburden the system with needless calls. In the event that there has been that hissing or the smell of a gas leak, the procedure is for the gas company or a qualified plumbing tech to inspect the whole system carefully, including turning off all of your appliances and looking for any gas flow (which would be indicative of a leak). Only after that kind of thorough inspection is it safe to go through the process of turning on your appliances and lighting the pilots one by one.

Now imagine the aftermath of a quake. There may be hundreds of thousands of homes that have not suffered gas leaks, but have nevertheless had the seismic shutoff valve tripped by the shaking. Prudence demands that every one of those homes be checked out for a gas leak by a qualified technician. That's because quakes can cause gas leaks, and you don't know which of the shut-off homes has suffered one until you check them all.

So how well has the system worked in previous quakes? We have Northridge 1994 as our poster child. In the aftermath of that quake, the Gas Company got help from Long Beach and from the PG&E company because the worst damage was geographically limited. There were about 3000 workers out in the field, doing inspections and turning gas supplies back on. As the Gas Company explains, its employees were still turning pilots back on 3 months after the quake.

In the event of a really large quake with region-wide damage, Long Beach gas company employees will be preoccupied with their own city, and PG&E employees will have their own districts to worry about. The Southern California Gas Company staff will be left to take care of its own. Perhaps we will eventually get some help from Cleveland or New York, but that by itself will take a week or two to set up. An additional complication is that a few sizable aftershocks could trip the valves again, so the Gas Company probably won't even start the process of checking houses until the likelihood of aftershocks has diminished. That could be a week or more.

The process for checking out one location averages about half an hour. Imagine half a million locations without gas service, which means that something like a quarter of a million hours of technician time will need to be expended to get those places serviced. And that doesn't account for the time that will be expended for those technicians to drive from place to place. Even if every technician can service 10 sites per day and the Gas Company can deliver 1000 such technicians into the field, that means that we  are looking at a month to get the gas turned on under optimal conditions.

Of course the aftermath of a large earthquake is, almost by definition, not going to be optimal. There will be other problems such as loss of electric power and road closures, and all of these will interfere with the efficiency of the Gas Company response.

Figure that your stove and furnace  will be strangers to you for quite a while the next time we have a substantial earthquake.

This is not to say that all is lost and that you have to move back to Illinois. It just means that there are certain elements of disaster preparedness that make  sense to do right now. We will be trying to bring some of that to CityWatch readers over the next few months.

For example I have a portable stove that is designed for use by backpackers but will work anywhere. It uses cartridges of gas that feed the fuel directly to a burner. The cartridges are replaceable, and you can buy them at the usual camping stores. I used this stove on desert camping trips so that I could make myself a cup of coffee in the morning. In the event of a major earthquake, I will be able to offer my neighbors coffee. It may be instant, but at least it will be hot.

(Bob Gelfand writes on politics and culture for CityWatch. He can be reached at amrep535@sbcglobal.net)