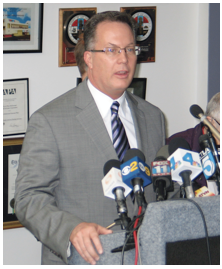 INSIDE INGLEWOOD-West Hollywood councilman and LA County Assessor’s candidate Jeffrey Prang came to Inglewood Saturday, October 5. He was the guest speaker at the United Democratic Party’s monthly meeting. He spoke about his candidacy, his roots and reform at the County Assessor's office. What was on everyone's mind—and what he addressed at length—was the situation with current Assessor John Noguez.

Prang hails from Detroit, where he got into the Democratic party early.

“I began my career in politics in the democratic party when I was 18, and I was active in my hometown Democratic Club. I was chair of the Young Democrats in Michigan.”

He has also served four times as mayor of West Hollywood as well as been elected five times to that city’s council—all since 1997. Prior to that he worked under County Assessor Kenneth P. Hahn (no relation to Assembly member Kenneth Hahn) as well as under California State Controller John Chiang.

He has an impressive list of endorsements from local, state and federal politicians. Among them are California State Controller John Chiang and L.A. County Democratic Party Chair/CA Democratic Party Vice-chair Eric Bauman. (A comprehensive list may be found here http://jeffreyprang.com.)

Regarding reform and solutions, Prang disclosed that some fundamental problems with the office had to do with the 1970s mainframe using COBOL. The Assessor's office handles 2.1 million pieces of property and yet still maintains a paper file on every one of them. The result is that when a resident—or any property owner—requests information on the property, an employee too often has to dig through files to find the information requested. He is working to convert the system to one that is expedient and convenient as well as has other benefits.

"Most of our employees are people who do manual labor entering information to a machine from a piece of paper. We need more people on the street making certain that properties are properly assessed."

Prang, a top aid to current County Assessor John Noguez, has distanced himself from his embattled boss’s 2012 criminal indictment for taking bribes to lower property assessments for campaign donors.

“I came back to the assessor’s office about a year and a half ago as part of this reform administration to help pick up the pieces where John Noguez left them off.”

He also gave a noteworthy update on Noguez’s performance and continuing compensation.

“Just to let you know, John is still the assessor. He has not been in the office since June of last year. One thing I give him credit for is that he recognized what a disaster he was in the office, so he went on leave. He doesn’t come in anymore, he doesn’t manage the department but he refuses to resign because he believes that’s a point of leverage he has to try to settle the case. There’s nothing we can do about that.

“But we’re very glad he’s not coming in; it would be much worse to have him in the office than out of the office.

“But he is the assessor and will be until he’s convicted or the election next year.

When asked if he is still being paid, Prang did not hesitate. “We’re still paying [Noguez].”

“This is the thing we learned last year: there’s really no such thing as a ‘leave of absence’ for an elected official. He’s just not coming to work.

“We’ve been trying to find a way to not pay him, but there’s no way not to pay him. He’s not an employee; he’s an assessor and the assessor gets a salary.

“He maintains nominal contact with the office so that he’s not considered as having abandoned the office.

“[Noguez] goes to his preliminary hearing [next week] and I don’t think we anticipate the trial to begin before December or January of next year.

“What the courts will decide, I don’t know. But he’s in deep trouble, and it doesn’t look good for him from a number of angles.

“What that means for me—and those in the office—is that the most important thing we can do is to make certain the [County Assessor’s] office continues to operate to fairly assess property.

“For me, there’s nothing more important than helping to restore public confidence and trust in the work we do.”

Prang summed up his approach to cleaning up the mess made by Noguez. “We need someone who has the experience and the competence to manage the assessor’s office.”

(Randall Fleming is a veteran journalist and magazine publisher. He has worked at and for the New York Post, the Brooklyn Spectator and the Los Feliz Ledger. He is currently editor-in-chief at the Morningside Park Chronicle, a monthly newspaper based in Inglewood, CA and on-line at www.MorningsideParkChronicle.com. Views expressed and/or conclusions reached by Mr. Fleming are his and do not necessarily reflect those of CityWatch.)