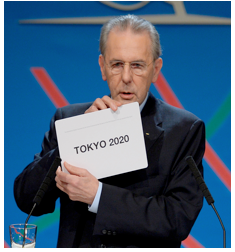 CERDAFIED-Danger, Will Robinson, Danger!  Why would the world allow their best athletes and their families to go to Japan for the Olympic Games when the disaster has only deepened and the denial only widened! Should we ask anyone to put themselves in harm’s way just to keep up the pretense that everything is fine in Japan?

I can understand why Japan wants to continue the charade of normalcy but why would the rest of the world fall under the same self destructive spell? Danger, Will Robinson, Danger!  Kazuhiko Yamashita, a senior utility executive at Tokyo Electric Power, said that the nuclear plant was "not under control".

For a company that has avoided the truth every step of the way and who relied more on prayer than wisdom, you would think that any admission regarding the lack of progress in resolving the imminent threat would be sufficient cause for alarm. TEPCO has yet to address a clean up, or the contaminated ground water, food supply, air, or quite frankly the entire island.

But politics is a wonderful thing. It can wish away nuclear disasters. Prime Minister Shinzo Abe has made assurances that no sane man can give. But then he appears to be speaking out of two sides of his face.

At the International Olympic Committee meeting in Buenos Aires, executive Yamashita is asked again if "the situation is under control". Again he admits the truth to major media, including national broadcaster NHK, "I think the current situation is that it is not under control."

An Olympic game of semantics is underway. Both the government and TEPCO have elaborated on Yamashita's statement, clarifying that he was only talking about one aspect of the disaster, the plant's waste water problem. Currently they are dumping 330 tons of contaminated water into the ocean each day.

TEPCO is not contradicting Abe's statement though Fukishima has remained on a perilous path since the earthquake and tsunami in March of 2011. The reactors have been cooled by ocean water trying to prevent a meltdown. If that is considered stability, than we are no longer rational human beings.

This catastrophe does not have to put another soul unnecessarily in direct danger. The Olympic Committee was blinded by compassion for Japan instead of listening to their higher duty to protect our athletes world wide.

They are not taking the risk, the athletes are! Let the athletes vote on the choice of venues. No one else should be able to dictate their fate.