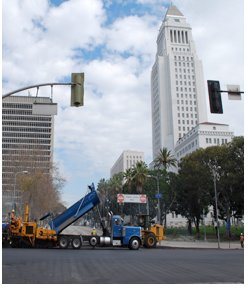 LA WATCHDOG - Well maintained streets are a core service of the City.  However, over the last decade, Mayor Villaraigosa and the City Council have diverted funds meant for our streets to help pay for a $1.4 billion a year (or more) increase in salaries, benefits, and pensions for City employees.

As a result, the mean streets of Los Angeles are the worst in the nation.

The City Council is considering placing a $3 billion bond measure on the November 4, 2014 ballot.  This money will be used to repair the one-third of our streets that in a failed or near failed condition over the next ten years.  If approved by two-thirds of the voters, our real estate taxes would increase by an average of $150 million a year for the next 30 years, a total of $4.5 billion, to service this massive load of debt.

However, this ballot measure is not ready for prime time, especially given vehement opposition that surfaced in January when the City Council was rushing to place this half-baked plan on the ballot at the last minute. Furthermore, the City has not made any real progress in developing comprehensive operating or financial plans other than rebranding this effort to pick our pockets as “Save Our Streets LA.”

We should have a better understanding of SOS-LA when the City Administrative Officer and Chief Legislative Officer report back to the City Council in early October about the scope of this massive infrastructure project, its cost, and alternative sources of funding.

More than likely, the $3 billion SOS-LA plan will be expanded to include a more comprehensive long term street preservation plan for all our streets, alleys, curbs, and bridges; to incorporate programs for Complete Streets, Green Streets, and alternative paving materials that reduce the “heat island” effect created by asphalt; and to require that all work be performed by City employees. These additions could easily increase the cost of SOS-LA to $5 billion, which, at its peak, would require that our real estate taxes be increased by 10%.

The City is also considering spending $200,000 to hire an independent engineering design expert to verify the scope and cost of SOS-LA.  Of course, the City will use this “expert opinion” to justify proceeding with the largest infrastructure project in the City’s history.

The CAO / CLA report will also investigate alternative sources of funding other than property taxes, including, but definitely not limited to, increased vehicle registration fees, higher gas taxes, tolls, and debt secured by the revenues from the half cent sales tax dedicated to local transportation projects that was approved by County voters in 2008.

The CAO and CLA will also go to great lengths to justify increasing our taxes, complaining that past sources of funding are no longer reliable, including stimulus money from Washington, the gas tax, and monies from Propositions C and 1B.  But these funds were never meant to replace permanently moneys from the General Fund.

Rather, the City is asking us to fund its continued profligacy as it refuses to end its giveaways to wealthy developers such as the $64 billion Westfield Group.  It also continues to promote dollar a year leases to political cronies who also happen to be generous campaign contributors.  Nor is it willing to allocate the necessary funds to our infrastructure, including any of the $750 million increase in General Fund revenues that are projected over the next five years. Nor is the City even willing to consider saving hundreds of millions of dollars a year by making its operations more efficient by contracting out noncore services.

The Herb Wesson led City Council is threatening to hold our lunar cratered streets hostage.  But even then, the odds of the Street Tax being approved by two thirds (or even a majority) of the voters are slim as we do not trust City Hall. This was evident by our rejection in March of Proposition A, the permanent half cent increase in our sales tax, only four months after 70% of the City’s voters approved Proposition 30, Governor Brown’s $6 billion tax increase.

So what do we get in return if we approve this massive, 30 year tax increase?

In addition to an iron clad pledge to maintain our roads and to provide for strong independent oversight of our streets and infrastructure, we demand a LIVE WITHIN ITS MEANS charter amendment.  This would mandate that the City develop and adhere to a Five Year Financial Plan, pass two year balanced budgets based on Generally Accepted Accounting Principles, and over the next ten to fifteen years, fix our streets and the rest of our failing infrastructure and fully fund our pension plans that are $11.5 billion underwater.

It is very simple. City Hall must respect our wallets and neighborhoods if they want our vote.