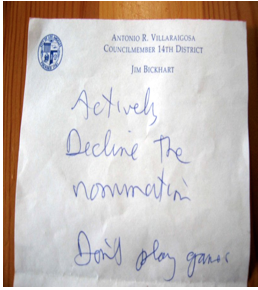 In his signed December 1, 2010 disciplinary memo, publicly posted on the “Yo Venice” blog, Jim Bickhart, a then-aide to Mayor Villaraigosa admitted to posting inflammatory, anonymous comments pertaining to a Venice land use issue.  Part of the punishment for Bickhart, a Venice resident who took exception to a pending policy, was an unpaid suspension; 2 ½ years of on-the-job probation; and the assertion that he posted an apology for his misconduct.  Note: posted, as in past tense. (LINK)

The Yo Venice blog says it has no record of Bickhart, who is still employed by the city on transportation issues, posting an apology.

However, two days prior, on November 29, 2010, an apology regarding these violent comments was posted on the blog under the name Snake Pliskin, the same author of the comments.  Either Bickhart is Snake Pliskin, and too cowardly to apologize as himself, or he has yet to honor his signed pledge to apologize altogether. Yet he remains on the city’s payroll having failed to honor the terms of the disciplinary memo, which was removed from Bickhart’s personnel file on Mayor Villaraigosa’s last day in office.  (LINK)

The inflammatory comments, referring to Venice homeless people, called for their violent removal: “…if these folks won’t leave, we should get someone to come around with a semi, load the homeless scum into it like stinking sardines and drive them out to the Mojave. Dump ‘em there in the dead of night blindfolded and drive away. Period. End of story.”  The entirety of Bickhart’s viciousness was still being written about years later.

The “Pliskin” apology said the comments were a misguided attempt at “satire & humor…a la Jonathan Swift,” who must be turning over in his grave right about now.

But this incident was not a one-off ooops moment demonstrating Bickhart’s poor judgment and viciousness.

On August 8, 1993, Bickhart was fired for misconduct by his boss, Councilmember Ruth Galanter, who told the Times that she had “no choice” but to let him go after comments he wrote about Mayor Richard Riordan.

On September 11, 2006, the Times documented Bickhart’s written threat to animal shelter Commissioner Kathy Riordan, ordering her to abandon the Commission Presidency to which her colleagues unanimously elected her just a few moments earlier.  Riordan abstained.  Bickhart has long and unfairly held a grudge against Riordan for the Times’ expose, unaware that it was another commissioner in the room that day who facilitated the article by secreting out of the room his note, written on old notepaper with his name on it. (See above)

Finally, in 2013, Bickhart had Riordan, the lone original Commissioner, removed from the unpaid position. (Find Kathy Riordan subject a few lines down.)

In 2009, the Daily News reported that the city paid a $130,000 sexual harassment settlement to Bickhart's unrequited crush for allegations she lodged against then-shelter GM Ed Boks. Bickhart, who was the liaison between the Mayor's office and Boks, facilitated her hiring.

And on August 7, 2013, nearly 20 years to the day after Galanter fired him, Mayor Garcetti’s office wrote to advise that Bickhart “no longer works in the Mayor’s office.” We will never really know why, but the above may have a lot to do with it.

The Venice cyber-bullying was not Bickhart’s first connection to vicious internet behavior while working for the city. Years earlier, he threatened a city official to not speak out against an attack blog which viciously tormented people for criticizing then shelter GM, Ed Boks, for whom Bickhart was responsible.  In fact, Bickhart knew of the blog before it was launched.

The city's tolerance of misconduct is not limited to Bickhart.  It has long had a reclamation cubicle for every bad boy who can run interference for; raise funds on behalf of; or has enough dirt on city officials.  If one is a sufficiently high ranking official like Mike Hernandez or Miguel Santana, who had high profile drug and alcohol arrests in 1997 and 2010, respectively, the cubicle, or office, as it were, is always open.  At the LAFD, misconduct has ranged from fire station porn shoots to the infamous Tennie Pierce dog food incident, which cost the city (read: taxpayers) a tidy legal settlement, as well.

The taxpayers will pay the damages, when necessary, and virtually everybody keeps their jobs.

Mayor Garcetti made a smart move in refusing to let Bickhart back into the Mayor’s suite.  But he needs to ensure that Bickhart’s misconduct is now kept in-check, lawsuits kept at-bay, and that Bickhart apologizes as himself, which was a condition of his staying employed by the City in the first place.

(Daniel Guss, MBA, is a writer who lives in Los Angeles.)