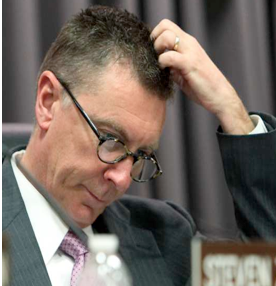 EDUCATION POLITICS - Who’s in charge at LAUSD anyway? With a budget larger than the LA City Council’s, there are just 7 elected officials representing our vast constituency.

Those seven farm out the task of running day-to-day operations to Superintendent John Deasy; who’s in charge when things go awry? What’s going on when the highest hireling tells those who hired him ‘I’m not going to do what you say’.  To whom does one complain when boots-on-the-ground level stuff goes south and the guy in charge turns out to be leading the charge of destruction, while back at the ranch the ones in charge of him are politically nonplussed?

Here’s what this parent sees the first week back in school:

• A High School with typical class size between 40-50 students (informal poll). Think back to your school days. That’s the size of a college survey lecture course. It is an impossible size for an effective, instructive high school learning environment. What is left to conclude, but that there is no intention of providing a functional classroom. Teenage learning cannot happen in such conditions and expecting anyone to teach this way is simply delusional: it cannot be done.

• A school so ham-strung by administrative cuts that the most essential of operations is impossible: in order to receive textbooks, children stand outside in the hot sun for four entire schooldays – not just some part of the day, but in some cases, for more than four entire full days. They are not learning, they are twiddling their thumbs. Precious instructional days are squandered, even presuming classroom conditions that were not nonviable.

• A musical program that might mitigate some of this instructional shamming, only it turns out the district is constitutionally undermining it. Musical instruments require maintenance, and that requires people to fix the instruments. There are now so few instrument repairers at LAUSD that an eight month turn-around repair-time is “normal”; a broken instrument is out of commission for 80% of the school year. Which effectively dooms all of LAUSD’s instrumental programming. For relatively wealthy schools, there is a work-around: they raise private funds to compensate for absent district services. This is socioeconomically unjust. At best. It is a fix available to few. At once it belies the district’s economy of scale and more crucially, its mandate to serve one and all equally.

• A system that is eradicating its libraries, its existential core. In sabotaging this vast network of intellectual, historical and monetary assets, including librarians and books and multimedia, this is the most bewildering reality of all. Several years ago the district fired most of its librarians. Schools were forced to literally close their libraries or with cobbled together private funds, support a reduced staff of library aides and assistants and volunteers.

Now even this heroic effort is in the crosshairs. Library assistants have been denied access to the circulation system, relegating teachers instead to subsume yet another task they have neither time nor training to perform. Now no amount of well-meaning privately raised funds can stave off the libraries’ ruination.

While it may yet be the single most important tool in our English-Language-Learners’ kit bag, all the same – or quite possibly because of this vital capacity? – these redoubts of learning are apparently doomed. The IPods have taken aim; the enemy of this new market has been vanquished. Libraries, once mortally excised of all staff, will now surely expire.

And where do we turn with our howls of horror?

Who is presiding over this educational devastation?

Our school board members?

Why are we dismantling our public educational system?

And who has the fortitude to stop it?

(Sara Roos is a politically active resident of Mar Vista, a biostatistician, the parent of two teenaged LAUSD students and a CityWatch contributor, who blogs at redqueeninla.k12newsnetwork.com)