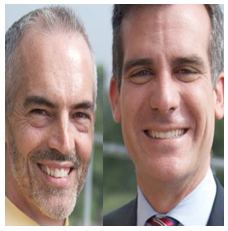 LA WATCHDOG - If Mayor Eric Garcetti is looking to remove the heads of the Transportation, Building and Safety, and Planning Departments, he needs to look no further than Millennium Hollywood, a 1.2 million square foot real estate development that will create massive gridlock at Hollywood and Vine and even screw up the traffic on the101 Freeway.

And the many Hollywood residents who are concerned about the Manhattanization of their community need to look no further than Mitch O’Farrell for the elected official who has the authority to lessen the impact of this highly profitable, $664 million high rise development.

Furthermore, Transportation did a poor job of analyzing the cumulative impact of all the 60 to 70 prospective developments in Hollywood which, according to one knowledgeable Hollywood resident, includes 8,800 dwelling units, over 5 million square feet of retail and commercial space, and more than 800,000 square feet devoted to hospitals and schools.

Nor did DOT do an adequate job of determining how the City’s Bicycle Plan would mesh with the increased traffic flows from Hollywood Millennium and the 60 to 70 prospective developments.

Nor did DOT take into consideration the impact of the massive NBC/Universal development on the already clogged 101 Freeway despite requests by Caltrans and other impacted parties.

Building and Safety, on the other hand, appears to be asleep on the job. It failed to review and analyze the errors in the independent geologic and seismic survey commissioned by the developer, even after Robert Silverstein, the lawyer for the Hollywood community, pointed out in a public hearing and in writing that Millennium Hollywood’s two skyscrapers are most likely sitting on an active earthquake fault.

According to a letter to the General Manager of Building and Safety from Silverstein, the department held off on writing a previously promised “rescission letter” until it had the opportunity to meet with the Millennium Hollywood developer.

Needless to say, the Planning Department was knee deep in this mess, as it has been in many other developments that threaten our neighborhoods.

In this case, the President of the City Planning Commission, Bill Roschen, was hired by the Millennium Hollywood developers, creating a huge conflict of interest that poisoned the entire process.  But this did not seem to bother the Planning Commission or the Planning Department as they both blessed this oversized development that will tie up traffic for miles in every direction.

But what is the position of Mitch O’Farrell, the newly elected Council Member who is intimately familiar with Hollywood Millennium real estate development.

On the one hand, his office claims that he has not made up his mind.

On July 11, in an almost unprecedented move, a 51 page “revised” ordinance was placed in the Council File, which, if passed by the City Council, would give the New York based developer a free hand in developing this property with very little oversight by the City and the community.

This ordinance, which was not discussed in the Planning and Land Use Management Committee meeting on June 18, did not even outline the public benefits such as the proposed $4.5 million donation to affordable housing.  Nor did it provide for permanent transportation arrangements, but limited shuttle and parking arrangements to only 15 years.  And surprisingly, the ordinance did not provide for a Project Labor Agreement or a Living Wage for hotel workers.

This ordinance would have never seen the light of day if it had not been approved by the local Council Member.

But then again, O’Farrell was the beneficiary of significant campaign contributions by the Millennium gang in early May, a critical time in the election.

Rather than proceeding with this highly controversial development where there are significant disagreements about traffic, geology, and other facts and claims, the Herb Wesson City Council should defer acting on this matter.  Instead, it should establish an INDEPENDENT commission, paid for by the developer, to review and analyze in an open and transparent manner the development and report back to the City Council within 90 days.

This independent commission would review the related geology, the impact of Millennium Hollywood and other developments on Hollywood’s traffic and the 101 Freeway, its parking and transportation arrangements, its height and the concerns regarding vertical blight, any potential conflicts of interest, the number of full time jobs created, the impact on the local economy, and all campaign and other civic contributions by the developer.

While the New York based developer and his $1,000 an hour downtown lawyers, lobbyists, and other suits will threaten to walk away from this deal, the projected rates of return of six times on the equity investment is too tempting.

There is no doubt that Millennium Hollywood will have a significant impact on the area surrounding Hollywood and Vine for many generations of Angelenos.  90 days is a New York minute and we need to make sure we are not getting screwed by the fast talking gang from the big city who will be long gone once they have the cash, leaving us with Manhattan style gridlock.