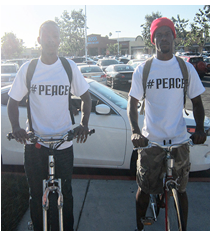 INSIDE INGLEWOOD - On Monday a peace ride/rally in honor of Trayvon Martin was started in Ladera Heights with the intention of making a significant stop at Inglewood City Hall.

The ride was conceived by Jeremiah Hardwell of Elite Ambitions.

Outside the TGI Fridays in Ladera Heights, Hardwell was joined by Harold Clark. Both wore Tee-shirts with the Twitter-related phrase, "#peace." Hardwell's mom, Ms. Josephine, and older brother, Avan, were also present to follow the two young men in her white four-door sedan.

“That’s my mom,” stated Hardwell as he smiled and pointed. His mother waved back enthusiastically.

Hardwell explained the event and its purpose. “This is a peace ride for Travyon Martin, but it doesn’t stop here. We’re going to ride from Inglewood to New York's Times Square and volunteer at homeless shelters along the way and bring awareness to what needs support, like the Inglewood Unified School District."

Hardwell is a U.S. Army veteran. Clark is an alum of Cal State Northridge. Both are from Inglewood.

It was indeed a calm and safe way to honor Travyon’s memory and to support young people from Inglewood moving forward with a plan to improve the city's image.

The two took off at 6:30 pm with Hardwell's mother honking, smiling and following them.

Two other cyclists from Black Kids on Bikes (BKOB), Samuel James Bankhead III and Michael McDonald, rode up. They remained in the parking lot, waiting for 20 minutes or more as other members of BKOB were on their way to support the ride.

At Inglewood City Hall there was a group of people waiting for the Peace Ride bicyclists. Andrea Edwards, a supporter of Elite Ambitions, was setting up candles at the World War II Memorial on the front lawn. Edwards is a pre-med student at Charles Drew University.

“I can’t believe I’m back here. I went to school right over there, “ she said looking back with a smile at Inglewood High School.

Edwards is originally from Florida. She moved to Inglewood as a 16-year-old and she was not surprised at the verdict. “That is how it is down there,” she said in a lowered tone.

After a while, some of the supporters wondered aloud wondered where Clark and Hardwell were.

“They're probably making circles around the neighborhood,” said Edwards.

Eventually the BKOB members arrived. They had departed nearly 30 minutes after Hardwell and Clark but had arrived before them at city hall. The supporters didn't seem too worried, however, and maintained their conversations.

“My parents were grown when Jim Crow got overturned. Were they surprised [at the verdict]? Actually, they were. They thought it would be a reduced charge. Then my mom pointed out according to the ‘Stand-Your-Ground’ law, it takes away the possibility of excessive force,” said Tahra Chatard, a member of BKOB who came to L.A. from Seattle via Atlanta after graduating Spelman College.

Again it was commented that it was taking way too long for two young, fast cyclists to get from the corner of La Cienega and Centinela to City Hall.

“[They] got arrested. They took Jeremiah and Harold in, but Jeremiah is adamant about us continuing with this [peace rally],” said Avan Hardwell, Jeremiah’s brother who witnessed the arrest and videotaped it as well.

The supporters gathered in a circle and bowed their heads while Ms. Josephine gave a prayer.

“He is my youngest son. We were encouraging him in his [peace ride]. This boy has courage and boldness,” she said.

In other parts of the city, Answer LA and Occupy LA had shut down the 10 freeway and stopped traffic on Crenshaw Blvd., Wilshire Blvd. and Hollywood Blvd. at Highland with very few arrests made among the hundreds who participated.

In past years, bicyclists from affluent neighborhoods  such as the West LA, Los Feliz and Santa Monica rode their bicycles on freeways. They even had a city councilman, Tom LaBonge, illegally "cork" Franklin Avenue so as to allow a hundreds-long parade of bicyclists to stop traffic as they rode around Los Feliz and Hollywood. Moreover, the events were filmed and photographed and remain on-line for all to see the lawlessness of these particular bicyclists—none of whom were or have been arrested despite the evidence of their illegal activity.

But in Inglewood, there are no “let's be wacky” moments.

In Inglewood, riding your bike on the freeway could get you shot.

In Inglewood, painting DIY sharrows on the roadways could get you thrown in jail for years.

In Inglewood, riding a bike peacefully with one other friend and your mom following will certainly get you arrested.

The IPD held Clark and Hardwell overnight. When Hardwell got out the next day, he seemed in good spirits.

“The police said I should have called them and told them ahead of time. I gave the mayor the press release, so I thought it was OK, but next time I will call the Inglewood Police Department,” he said.

Calls to Inglewood Mayor Butt's office requesting comment whether the mayor had tipped off the IPD to the peaceful, two-man protest ride were not returned.

Butts is a former IPD officer of 19 years as well as the former police Chief of Santa Monica. He is known to maintain a very close relationship with the IPD and even uses the gym frequently.

Nevertheless, the two men appeared stronger for having endured a clearly targeted  and non-disruptive protest even as other protests in LA severely disrupted traffic and ended up in very few arrests despite the time lost and damages incurred to motorists, the businesses and the residents' pride.