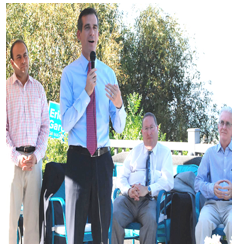 LA WATCHDOG - What was Paul Koretz thinking when he orchestrated a backroom, sweetheart deal to lease the million dollar vacant Fire House 83 to the Armenian Cultural Foundation for $1 a year for 50 years without even reaching out to or consulting with the Encino community and Encino Charter Elementary School and its parent body?

On May 7, without any prior committee meetings or discussion in Council Chambers, the Herb Wesson led City Council approved without any objections an April 19th motion sponsored by Koretz, Paul Krekorian, and Eric Garcetti directing the General Services Department, in consultation with the City Administrative Officer and the City Attorney, to negotiate and present to the City Council within 60 days a 50 year, $1 lease with the Armenian Cultural Foundation for this “surplus” property located in Koretz’ Kingdom, Council District 5, on the northwest corner of Balboa and Addison, adjacent to Encino Charter Elementary.

But no attempt was made by the City or the Council Office to reach out to the local community, including the 800 homeowners in the adjoining neighborhoods from Balboa to White Oak that are impacted by school related traffic, the adjacent school where there are significant traffic related safety issues impacting the 570 students, or the Encino Neighborhood Council.

Rather, the stench of sleaze and campaign cash permeates this deal.

On Saturday, May 11, only four days after the Herb Wesson led City Council approved this motion, the “Armenian American communities of the West San Fernando Valley and Hollywood hosted a joint fundraising event for Los Angeles City Mayoral Candidate Eric Garcetti raising approximately $50,000. This marks the second Armenian American fundraiser held in the past two weeks approximately raising a combined $100,000 to elect Garcetti.”

Previously, on April 11, Talar Dardarian, the Chair of the Planning and Land Use Committee of the Encino Neighborhood Council, sent Koretz a misleading letter supporting the Armenian Cultural Foundation’s acquisition of Fire House 83.  However, in a clear ethical and fiduciary lapse, she failed to bring this hot button issue to the attention of her committee.

However, on May 22, the Encino Neighborhood Council passed a motion stating it “disapproves of the manner, circumstances, and terms of the lease for the repurposing of the old Fire Station 83 and the lease to the Armenian Cultural Foundation. The Encino Neighborhood Council further recommends the City Council consider other leasing opportunities and organizations for the repurposing of old Fire Station 83.”

Needless to say, the circumstances surrounding this behind the scenes land grab stink.

While this deal has not been finalized and may be subject to revision, Koretz, a past advocate of transparency (especially in connection with the Ratepayers Advocate), along with the active assistance of Krekorian and Garcetti, needs to put a screeching halt to this ethically tainted deal that has not yet seen the light of day.

The City must also obtain an independent appraisal of the property and get a better understanding of any environmental problems associated with underground storage tanks and asbestos.

Most importantly, however, the City needs to conduct a thorough traffic analysis that takes into consideration the safety of the 570 students at Encino Charter Elementary School.

Finally, if the City decides to dispose of Fire Station 83, it must conduct an extensive and transparent outreach program to determine what is in the best interests of the City, the local neighborhoods, the Encino community, Encino Charter Elementary School and its students, the Armenian Cultural Foundation, and the many other stakeholder groups.

LA loves clear skies and its sunshine, especially when it comes to unethical, self-serving, land deals that are tainted with the stench of campaign cash.

(Note: The Encino community and parents that are concerned about the safety of the students have started a petition urging Eric Garcetti, Paul Koretz, Paul Krekorian, and the rest of the City Council to terminate the proposed lease and engage in an open and transparent process with the local community regarding the lease of this valuable property that adjoins Encino Charter Elementary School. You can also LIKE Encino’s Petition on Facebook).